So firstly a Happy New Year to all you Brummies around the world, the regular readers of the Blog in the UK, USA, Japan, Australia, Germany, Holland, Canada, Africa and to my overseas Brumbeat mates and other friends too.

I played my first gig in 1960, I never thought I would be alive to see this year when I was a teenager.  Swingin Sixties, Die young and have a good looking corpse was my phrase of the day.  Live fast, explore the unknown, put yourself in bad company to see the other side of life.
So uninformed were we, it never occurred to me at all during my youth that in the music biz everyone around you wanted a piece of the action, to get a slice of the pie whether it be as a "friend" or whatever.  I guess that was the beauty of youth when musical ambition was greater than anything else at all....the top of the pile was to have a recording contract and see your name on a piece of vinyl "Where do I sign?".

It was a HUGE step up the ladder when you were in competition with so many good bands about in Birmingham during the 60's, the zenith in quantities of groups.

Well here I am now, turned 70.  That idea of a dead but good looking corpse
all disappeared and I now fully embrace the gargoyle look.   I've done all the recording stuff and tolerated unmerited egos which now are things that amuse me.  Gladly though, I am still playing and probably enjoying it all as much without having to go through all that teen angst, these days the punters marvel at how someone who should be in a grave is still stomping across the stage, outplaying most of the youthful musicians around.    Its a paradise, a dream I never knew could exist but am thankful for the privilege.   I doubt if I will be still at it at the beginning of the next decade but you never know.

BEGINNINGS
Being in a band in a large city like Birmingham always started out with playing with people from your own school or area, in my case Hall Green.    Across the other side of the city were other like minded musical aspirants were struggling through the hours of practising The Shadows instrumentals, honing their skills on the new fangled electric guitars.    One of those people was:

BOB WATKINS
Bob, a little older than I, was born in 45 and largely raised in "West Smethwick" as his mother insisted on calling it.  His musical journey started after seeing a skiffle group playing for the 6th form school Christmas party. 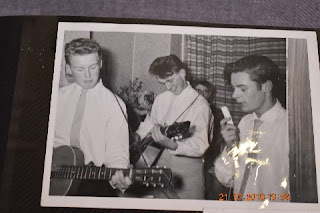 He and some mates formed their own Skiffle Group and he was hooked. It didn't take long before electric guitars got into their hands and they gave themselves the name of The Sabres, and like hundreds of other kids would listen to The Shadows new instrumental, learn it in the afternoon and play it the same night in front of some youth club audience.

Although young, us pioneers became adept at navigating the fretboard copying Hanks or Bruce or Jet Harris individual parts, learning and remembering melody lines and chord patterns and generally honing our craft.  I wouldn't like to guess how many "The Sabres" 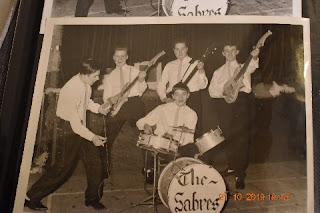 there were in Birmingham either but you can bet there were a few in those early days, most not making it out of the front room of their house.  This one did and got bookings


As happens, one of The Sabres decided he didn't want to do that any longer but on leaving recommended a replacement...........and it was a Girl!!!  Girls playing guitars? unheard of in my part of Brum although it was later on I heard about Meghan Davis(Applejacks) in Solihull.
The female replacement for his area was 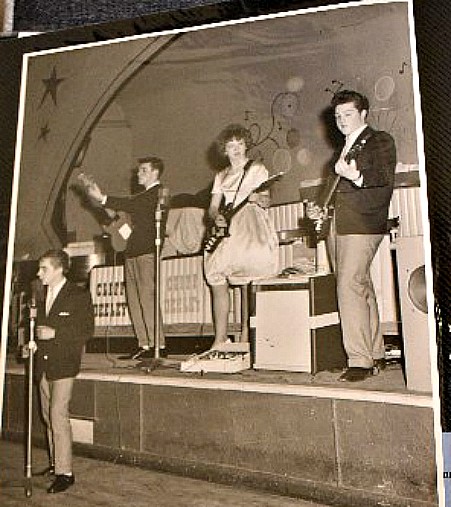 Christine Hill, who was a local guitar whizz and knew all the chords including Barre chords and gladly passed on her knowledge to him.   What a stroke of luck.
The photo of The Sabres with Christine is so reminiscent of the dance halls we played in the 60's. Christine was not only a great replacement, she had the look, a Burns sonic, a wealth of musical knowledge and also got the band gigs.!  That was like striking the mother lode. During the following months, with growing confidence and ability Bob persuaded his Mum to buy him a Fender Stratocaster, (Now I know why she insisted coming from West Smethwick.. it was obviously the more affluent area of Smethwick).   Bob was now fully kitted out with a beautiful Strat, watkins copycat, selmer amp, winklepicker shoes and stage dress, everything was in a forward motion. However, good luck doesn't always last though and his mentor Christine left the band for fresher fields.

The band carried on and did all the usual gigs in Brum for the next 2 years then split up which was "devastating" for him.  In those days being in a band had a different set of rules than today.  You had grown up musically together, had some hilarious times and many bad times, experienced playing on stage together for the first time.  It was an emotional, passionate thing, a bit like losing your girlfriend.

THE WILD CHERRIES Bob played on half-heartedly with a few other groups,as you could do in the day, and was on the verge of giving it all up when he got a call from great bassist Tiny Tim, ex Starliners, a mountain of a man whose playing was unequalled, as was his size. 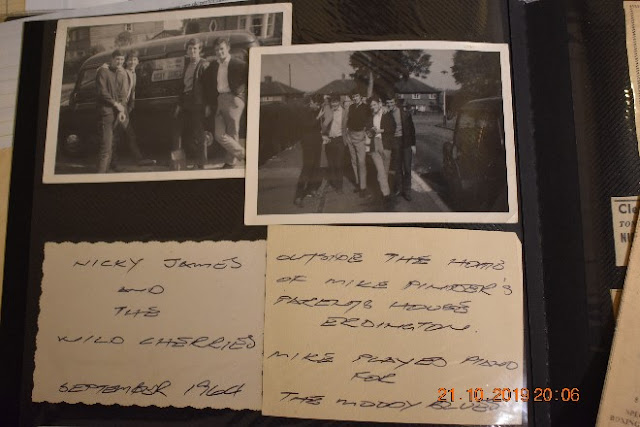 He asked Bob if he was interested in joining The Wild Cherries as lead guitarist, a group fronted by Nicky James.  Also in the line up was Bev Bevan, Phil Akrill and Tony Lewis.   Nicky James had an incredible voice, fabulous stage presence and the women loved him but anyone who knew him would and could tell you many stories about anything he got involved with, including me.    Bob Watkins thought he had made it at last, in a great band with good players getting good gigs, it was living the life he dreamed of but with Nicky at the helm you could almost guarantee that it would go "tits up" at some time or other and of course the band folded and Nicky moved on.   Its the cruelest of businesses that takes all your aspirations away in a heartbeat.   Last week I was speaking with a well respected musician who knew Nicky in his later life and he had asked him about The Wild Cherries, Nicky said he couldn't remember them.  I think that's selective memory rather than loss of memory.

Bob however had the good fortune to come across ex Brumbeats vocalist, Graham Ashford or, as he was known then, Buddy Ash and continued playing with him on the circuit in the Buddy Ash Sound till making money for a living or "getting a job" became more important.

The most opportune time to have made it, in a band in the music biz was during the 60's, Bob nearly did, as so many others nearly did but disco had started to rear its ugly head and gigs were disappearing faster than you could think.   The group game was up.

"To everything there is a season"

Bob and this Bob too were the most fortunate of people because we both experienced the best time of all to have been playing, it was all new, undiscovered ways to play the electric guitar, to extract sounds that had never been heard before.  Everytime something new happened it was a FIRST and we were the inventors.  We have something to be proud of, all us musicians of the early days, even drummers! hoho........

We lived in the best times ever, as musicians experienced the thrill of the pop generation surging forward and we were the tip of the spear.   We might have gathered a few years but have a lot to be proud of and of course, quite a few are still playing and........if you're interested

Bob still has his gear!!

FINALLY
My thumb has now recovered sufficiently for me to getting back to the music.
Thanks for your emails.