Hiya Brummies and a Happy New Year to you All,

Well Christmas has gone, the New Year is here and it's now been two years since I first started doing this blog, so Happy Birthday to me! Owing to this world economic crisis and my own economic crisis, I won't be inviting any guests to the surprise party I'm holding for myself at a secret location. I would like however, to thank all of those kind folks who have spared their time to contact me, your efforts keep sites like this and the memories of those great Brumbeat days alive. I hope you continue to add more chapters to that story throughout this year too, along with my inane ramblings.

Its been a strange 12 months, seeing some of my old mates disappear off the face of the earth but inevitability comes knocking relentlessly and will continue to do so. If there's someone you have always wanted to aplogise to for being an asshole but your ego never let you get around to it...do it now before you peg out, I'm sure you'll feel all the better for it and so will the recipient.

SOME FACES
Thought I'd highlight a couple of the Brumbeat faces that are still around 'doing their thing'.

MALCOLM PALMER.
Multi-instrumentalist, Malcolm Palmer has a great past. One of the founder members of The Yamps,Traction,The Fashion and 14 years with The Garage Band - where he was also accompanied on vocals by his son. He famously turned down an offer from Chicken Shack who were in the process of forming (he went to art school with Christine Perfect) because he preferred to stay playing with his freinds. Malcolm has seen more than his fair share of gigs and has also worked in New Orleans looking for his musical roots. I could have probably saved him a journey (they're in a bag under the stairs next to your 'How to Keep Calm" book?). 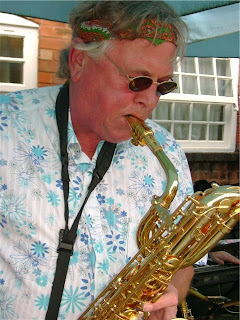 These days he can be found 'Blowin' his sax, tickling the ivories and playing occasional guitar with his band 'Bourbon St' - a good little 'all round' outfit. The band is playing at The Red Lion, Shirley on 11 Jan 09. So "A splendid time is guaranteed for all" and you boppers can go and boogie the night away.

As well as being a dedicated musician, Malcolm's stage craft, and motivation, particularly during his high energy days with The Yamps was outstanding and his output was something to be seen. Bourbon St have a web site you may like to check out. If so, Click below: 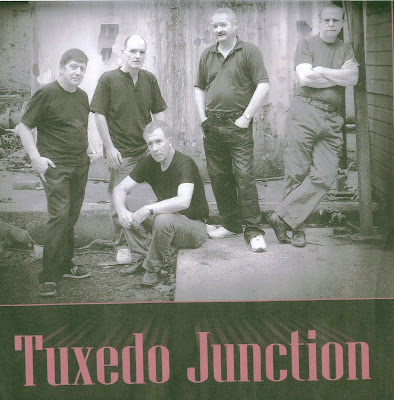 The Tuxedo Junction blues band have recently re-formed and are performing a charity gig at The Leamington Irish Club, Leamington Spa on 30 January 09. So, if like me, you are into the Blues and are in the Leamington area, get yourselves along there, have a rockin' good night and help raise a few quid for a good cause. Good luck guys, - I imagine there was a lot more hair about during their earlier incarnation.

GERMAN SENSE OF HUMOUR?? - Those of us who believe that the Germans have no sense of humour will, no doubt, be impressed by Chancellor Angela Merkel's attempts to cheer up her fellow countrymen during these grey days, politically speaking. She has recently taken up a semi-pro position in Music Hall and is doing the round of German Working Mens Clubs, you know - sauerkraut mit bockwurst in a basket. Her latest publicity photos show her during her act, performing her much loved 'Nose Balancing Routine' which has her fellow countrymen rolling about with laughter. Now, if only we could get Gordon Brown to team up with David Blaine and do the famous disappearing trick? - in fact, why not both of them together? it would save the world from boredom. 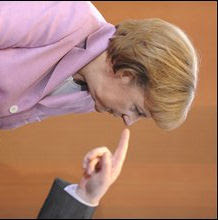 Happy New Year to everyone out there and please take care of each other.