Oh Dear, Dear Me, Brummies,
I'm not going to start with my usual bright greeting. "Why not Bob?" you say.
I'm gonn 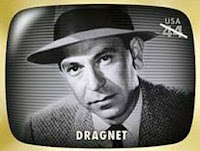 a say "Evenin' All" - in a voice that reminds you of Sgt Joe Friday (Dragnet) well, one with a Brummie accent! - yes, "BOB'S' INVESTIGATING" again.

I'm on a serious mission to get to the bottom of a scandal that will hit the world of Brummie music like a bloomin' number 29A bus gooin' full speed down the Stratford Road -
SCENE OF THE CRIME
- BRUMBEAT TOWERS
"Hey John", I said "Has a soddin' Miracle happened?".
Oxford English Doctionary definition of MIRACLE: Marvellous event due to some supposed supernatural agency...

"It's a mystery to me" he said "The Stats don't lie". "Of course Stats don't lie" I said, they're inanimate figures, it's the dickhead with his finger on the button that does the lyin' part".  So either a MIRACLE has occurred here at Brumbeat or it's:

It's NOT PRETTY and it's written in red so it must be important.
John and I had/have been discussing admitting bands from outside Birmingham.  Well he opened the door to bands from Wolverhampton and now our hallowed pages are sullied by cabaret groups, armed with smart suits and polished acts, a far cry from the antics of 'proper' bands playing RandB to sweaty crowds.  Let me clarify one thing here, I don't include Walsall bands in that 'Wolverhampton' category.

Not only have we been infiltrated but it would appear that they have come armed with their schoolboy antics of vote rigging, like teenage groups did to win the Midland Beat "Group of the year" title back in the early sixties, like The Talismen from Cheltenham for example.

Well we're older than 15 and you're fooling no-one!!

"Can you prove it" some guilty bastard is thinking now.... "I don't have to matey" - it's Trial by Peers!.  Now I have a little experience in the world of "being in a band' and have played the length and breadth of the Black Country but never did I come across a band that was anywhere near as good as Traffic.
The Strollers must have been SOME act for the short time they existed (62-63) 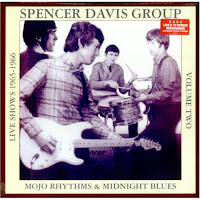 Steve Winwood was between 12 and 14 during that time and just coming to his RandB pinnacle with his voice sounding as soulful as Ray Charles and as powerful as any I have ever heard, his piano skills already legendary, he was one of the best guitarists around, and gigging with Spencer Davis. - Just as a comparison to The Strollers or any Wolverhampton band.  I was between 12 and 14 at the same time, in Brum, playing guitar too but that's where any similarity ends.

I still wanted to give them the benefit of the doubt though, so considered other options.  Including someone 'inadvertantly' pressing the Enter key a couple of hundred times.

THE INVESTIGATION COMMENCES.
I first went to Wikipedia to see if a Miracle had occurred recently - Nothing!

A Google entry revealed four references to The Strollers, "Ah, now we're getting somewhere" I thought.  My hopes faded however when I discovered that the four entries were in fact all the same article!  Their Brumbeat.Net bio, copyrighted to John Woodhouse and Brian Nicholls  but placed on different sites.  At least it was a lead, so I investigated those inferior Brummie music sites further and yes, the article was there, there were no comments on the Forum pages from admiring fans but at least I had two more suspects!!
(Rattish smell beginning to get up yer nose yet?).

Now I believe that the readers of Bulls Head Bob are bright as a shiny new silver sixpence and won't be fooled into thinking a miracle had actually occurred.  Well a couple of you probably DO think a Miracle has happened and you would be writing about it yourself if only the authorities hadn't removed all your sharp objects.

I thought I'd approach it from another angle.  I took to the streets of Sedgely with a placard asking "Did you Vote for The Strollers?"  I have to report that almost immediately, I found a person who said he had and was not the only one!. 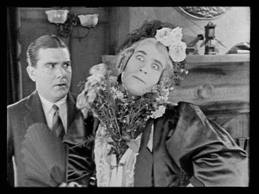 He said that his brother had their music sung to him by a Klingon at his wedding too! 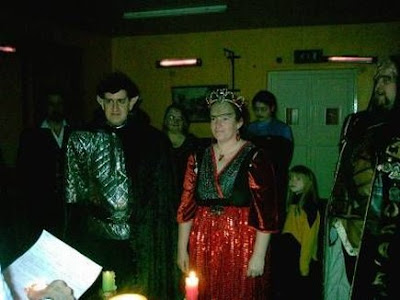 I thought he, or his 'brother' might not make credible witnesses but still not wanting to make rash accusasions, I considered that their 'back catalogue' had just been released and these votes are as a result of their current stardom?".
I traipsed, metaphorically speaking, across to record company sites and entered their name - It would appear the closest they ever got to recording was in someone's front room - could have been in Tipton though, the home of Black Country recordings, a bit like Nashville without the pickers, or the good music.

I see from their bio that two of them have fled the country!! 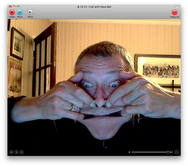 By chance, I was talking with Brummie guitarist
Dave Ball who knows the other 50 percent of things I don't. As we know he has been in bands as diverse as 'The Little People", "Big Bertha" through to Procul Harum.

He had this reaction to The Strollers news and then applied the face that conveyed to me this statement!!
"When I was working out the guitar solo for Conquistador I often thought, if only the Strollers were about to help me with the tricky bits"
So it appears he might have some knowledge of their past?

Poor man, he looks green with envy, having to physically force that smile on his face.

WITNESS FOR THE DEFENCE

I considered, halfheartedly, interviewing comedian, Ian 'Sludge' Lees.   He had been the vocalist at one time or another for the following Wolverhampton bands - Finders Keepers, The Montanas, Light Fantastic and The Strollers themselves! but after seeing his publicity photo I thought he might be a bit too biased!!

It'd be a bit like leaning into a punch..

Of course it could be someone trying, badly, to promote a book....who knows?
Myself and the other members of the gang of 4 have been pissing ourselves, except for Crazy Malc, who confuses The Strollers with Flanagan and Allen's nostalgic war time song 'When I'm Strollin, just Strollin' and says it deserves to be No 1 in the Brummie top ten??


someone is........THE GUILTY BASTARD.
If John is having these type of groups on the site he should put them on a page where they can't harm any sane person interested in proper music.  You know, 'Child Friendly', maybe password protected - when you Enter you're guaranteed a corny joke in between songs, "Something to tap your feet to between Bingo sessions" and the odd shaving foam 'pie'.....   He could get one of them to do a Masterclass on the intricate chord structure to "Chirpy Chirpy Cheep Cheep" or "Simon Says".
By the way, it seems appropriate at this time to inform you that The Montanas are now receiving a load of votes!?!?!?  I imagine I'll never get another 10 quid gig at Sedgeley Parish Hall after this, but this is just nonsense!!
Does anybody serious out there want me to write for them?????

Bob
PS.
Steve Winwood, all round cool dude, Master of All  Brummie Musicians is reported to have said "Drat! you pesky Strollers. I knew one day you'd come along and topple my crown, with your smart suits and cabaret act routine. I'm off now to learn how to be a proper musician before The Montanas teach me another Strollers lesson" - "Honey, Mmmmm sugar-sugar"
STOP PRESS:  John Woodhouse says "It was nothing to do with me, nobody has paid me anything"