Watcha Brummies, Muso's and surfers of the web.

Happy New Year and all that stuff.  Spent Christmas in Manchester with my lovely daughters family, nice vibe I have to say and despite the odd shopping argument, myself and Mrs Bob thoroughly enjoyed the Christmas festivities, food, chocolate etc etc etc.  So then, on with the motley...

Can you get a good deal from EBay? are the prices realistic?  With two days to go and no blog written, I took a cyber stroll through the ether on your behalf.

Cruising through ebay I happened to notice that there was a VOX Lynx guitar for sale and also a Watkins Rapier 33.  The asking price for the Vox was a staggering 995 pounds and for the Rapier 395 pounds.  Now we all know that Vox guitars were not very good, it's not a secret.  If not for Brian Jones using a Teardrop model with the Stones during the sixties I think the brand would have died on it's feet and these days the only Vox models that attract good prices are for the Teardrop and the Lozenge so from a design point of view Vox did something right there.

The Lynx appears to be in good nick but I can never recall any musician liking this model and it's looks can't be considered appealing as it is a cross between a Hofner Verithin and a Guild, awful scrathplate design too that makes it look like a bat has landed on your guitar!  Now I'm sure there are Vox collectors but I'm talking about the whole package, great sound, desirability and aesthetics, none of which this guitar possesses for me. On the other side of the coin, 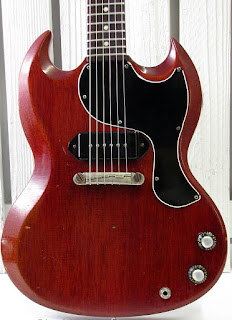 I remember buying my first Gibson Les Paul junior from Ringway Music in 1962 or 3, it was 63 guineas, I'm not sure if the case came with it.    Today I have looked at this one that is on sale for 2,295 pounds and just looking at one again transported me back to another time and some really happy days.  It has some dings and knocks but I just know what that lovely little guitar is going to sound like when you plug it in and crank it up, I wish I owned one right now.

I then checked out all the other guitars I had owned as I guess we all do from time to time, saying "Cor, if only I'd hung on to that", I kept going back to the little Gibson though.

I got to wondering what the value of that 63 guineas represented in todays economy and by some devious mathematical jiggery pokery I came up with the figure of about 650 pounds.  So, realistically, how could a Vox possibly be worth 995 pounds given that it's appeal can only be subjective?

What could I buy for that amount of money today??  Well I looked for other guitars 'of their day' that would finish their sales that day or were offered as a Buy it Now option on EBay

Right off the bat I could have bought this 'buy now' for 850, a little bit cosmetically unperfect but that can be easily rectified, there is one thing for sure though, its history is steeped in the Blues and British R&B and we know it sounds great.  I drooled over this beauty wow!!: 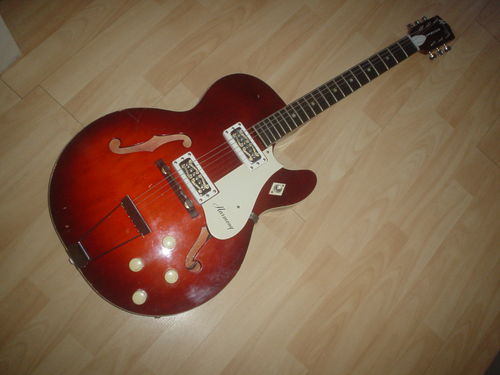 ARIA TWINCASTER AND EKO CHEAPIES
Both of the following two guitars were manufactured in the early 70's.  The Aria is on sale for 225 pounds (unsold) or an EKO semi for 450, another lovely looking period guitar that would be a preference above the Vox for me: 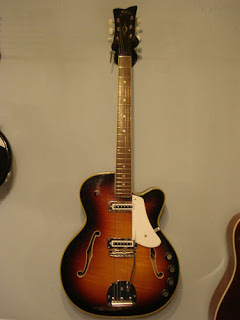 If it was simply authenticity that is on sale then I could have bought two historic guitars in one day for half the money of the Vox.  The first being an Egmond Lucky 7, this is a real early guitar with the cheap option of the day of externally adding the electrics.  Egmond then rebranded the guitar as Rosetti and there was a solid body variant called the 'Rosetti Lucky 7 Solid' which Paul McCartney used as well as many Brummie guitarists of the day.  It was enormously popular because of it's price.  This Egmond Lucky 7 also had it's original case by the looks of it.  It was on sale for 135 pounds and didn't sell!! 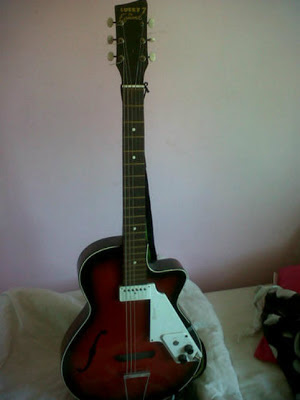 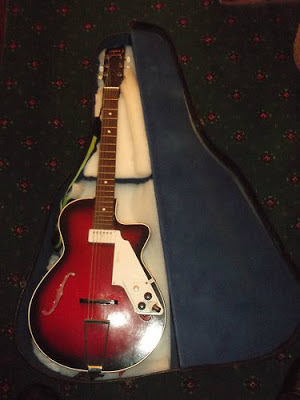 The other peculiarity that went for 260 pounds was a FENTON WEIL, The Deluxe I think, although the seller had no idea what it was, other than an old guitar.  The brand logo had been removed from the headstock but it's small body and giant headstock were instantly recognisable but I'm probably wrong about the model.  I thought, at first it was a Guyatone because of the headstock but have now re-convinced myself it is a FentonWeil: 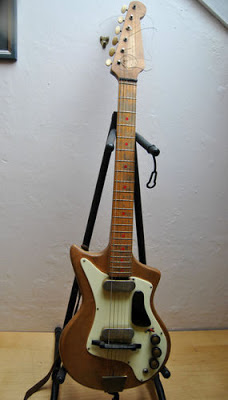 It's not a beauty by any measure but it is an authentic early solid body guitar, incidentally this guitar sold for close to 40 pounds in 1961 which would have made it pretty expensive back then, it always has the appearance of being made from old War Stock electric components to me.   I think that someone has changed the body shape or perhaps I'm totally wrong.  I would never buy it in a month of Sundays but I think the buyer of this would be pleased with it's price.  By the looks of the fretboard, it's seen some action so it's nice to see that some enthusiast has it now.

I could quite easily have bought any amount of very nice modern USA Fender Strats and a couple of nice 2000 Gibson SG standards for around the 600 pound mark along with a Fender Telecaster Hot Rod 52 or a Gibson Les Paul 50's Gold Top re-issue each selling for 800.    It really is incredible what value people put on an oldish instrument irrespective of how good it is and, by the same token, there are bargains out there if you are a history buff or, if like me you would be happy to pay for a piece of your past, that is, if you have any dosh left after Christmas or if your Grannie has given you some money for being a good boy.

Get searching.  I'm pretty sure that I could have found many more astute bargains but decided to just stick to EBay and shop on one day.  Here's one last guitar that I would quite like to have bought, the Antoria ES175, I never thought much to Antoria guitars as rock guitars in those days but they did make some very nice semi acoustics and this is one of them.
This is a nice thing and some lucky person got it for around 500 quid, nice one, congratulations to you!! 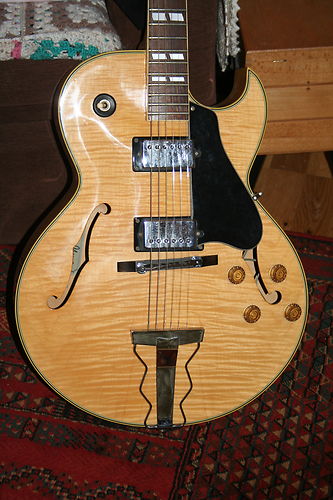 CHRISTMAS IN MANCHESTER
Now I'm sure that we Brummies are justly proud of our City and still regard it as the UK's 2nd City.  We can buy anything we want from the shops and we get to see the greatest concerts.  However at a local retail outlet in Chorlton,
where I spent Christmas, the shop assistants appeared to be providing the
clientele with a Seasonal Extra I hadn't seen in the confines of Hall Green!! 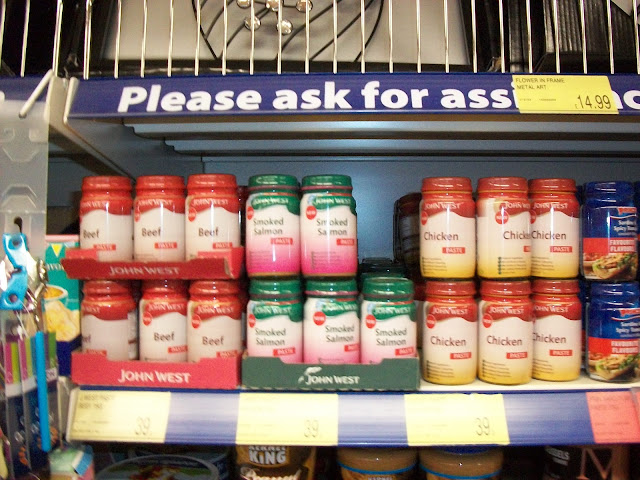 So anyway my friends, do have a Happy New Year, keep playing, keep healthy and keep young.  It's the morning of New Years Eve and I'm starting the celebrations early today.  Tomorrow I wake up a new man, devoid of malice I will make it my desire to love everyone just a tad more....