Hello Brummies,
Here we are then, April and the onset of the British Springtime. Lambs cavorting in the meadows, young folk having it away in bus shelters and sparrows and larks coughing up their lungs whilst flying over the Aston expressway. Ah..... the beauty of Brum.

TUXEDO JUNCTION
As reported in Jan, the re-formed Tuxedo Junction Blues Band played their first gig at The Irish Centre, Leamington Spa with the proceeds going to charity. The night was a great success with all 400 tickets pre sold before the gig. There was an enthusiastic crowd and the band raised over 1500 Pounds. Brilliant guys - I dont think there were that many people at The Move's first re-formed performance, perhaps TJ were playing more gritty licks. A couple of piccies below of the band in action. They have several gigs upcoming in the Leamington and Warwick area so if you get a chance go along and support live music. 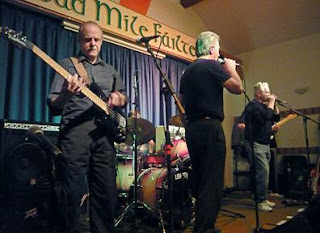 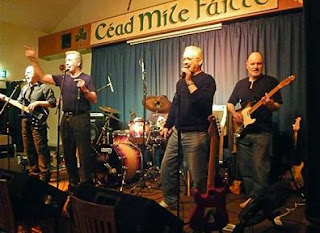 THE GREAT DEBATE, JUST WHO'S ENTITLED? Tom Lane, skin thumper for Tuxedo has also raised the discussion point I alluded to in last months blog when talking about The Sorrows being a band from outside of Brum that deserve to be included within the Brumbeat community. He said to remind those purist diehards that although he and TJ come from the Leamington area he has also played with many Brum bands too. It is a part of the controversy about who should be included on the site, for instance should cabaret groups be included? I mean, were they Brumbeat? - I dont really think so. What about groups who are included who didn't come along till after the Brumbeat period? Shouldn't they be on a separate site of those Brumbeat wannabees who WISHED they had been about then - its a quandary for sure.

PHIL MYATT. Nice to hear from Lee Stevens (ex Lee Stevens and the Satellites) who has some fond memories of Phil and like many of us, was upset to hear of his passing. Lee now lives in Canada but informs me that before emigrating in 68 he and his band performed regularly at The Carlton. Phil Myatt threw a surprise champagne party for him which was attended by many groups of the day as a way of saying farewell. Can you really imagine any of the other promoters doing that sort of thing........either then or today, no chance!! He was one of a kind.

Its short and sweet this month guys, take care and keep music live.............Oops, Happy Easter for those of you with a religious outlook.