Once upon a time, back in those 60's days, one of the characters on the Brumbeat scene was Uglys guitarist, Willie Hammond. I hadn't seen him for over 30 years and then, roughly four years ago, I was flabbergasted to see him on the TV show, "A Place in the Sun". 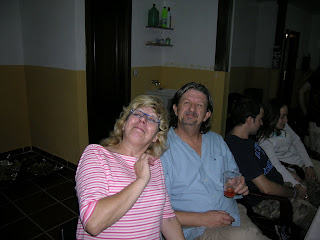 Since then two more programmes about him and his wife have been made and now they're all repeated on TV, in fact, I see him more now than I did when he was out and about in Brum!

BRUMBEAT
A couple of years ago Willie had been asked to do an article for Brumbeat, not content with that, he got a load of muso's together for the popular 'Six of the Best"articles. "I would have felt too egotistic to write something just about myself and I felt happier being in the company of friends". Will has helped out the Brumbeat site with other information too. A few words with a 'well placed muso' got me his phone number and I made the call to his house in Spain. After half an hour of "Do you remember?........." I sort of suggested that it would be nice to visit and maybe have a drink or two -(I know how to get to his heart). So anyway, after flying into Seville courtesy of Mr Ryan and his airplanes, I hired a car and drove deep into the dramatic countryside for a couple of hours before pulling up at Willie's place in Arroyomolinos.

DEEPEST SPAIN
I was greeted by the man himself and his lovely wife Linda and after much back slapping and hugs we settled down at a table under a fig tree. We hadn't seen each for well over 30 years so we had a lot to catch up on. After some food and a few bottles of wine out came the guitars and under the star filled sky, we played the usual mix of Beatles and other well known songs till long into the night.
I had arrived in the darkness so it was a nice surprise to wake up in the brilliant sunshine and find myself in a whitewashed village nestling at the foot of a mountain. Willie and I walked to Paco's Bar for a coffee. 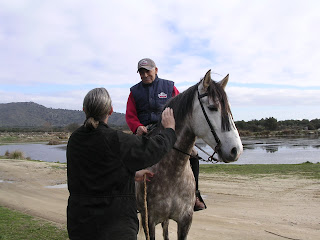 A couple of horses were clopping through the streets and tractors were heading out into the countryside with the drivers waving and shouting things in Spanish that only Willie could understand. Although I had been to Spain before, I had never experienced the Spanish interior or the culture. I was made to feel welcome by everyone we encountered although I could only mutter my couple of words I had learned in reply. After coffee we set out for the day to walk on the mountain, now accompanied by Linda and their dogs. 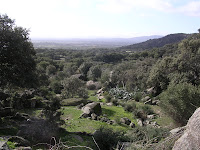 The dogs went chasing after anything that rustled the bushes or long grass and I was instructed in the art of how to find wild asparagus and we tramped across the mountain searching through the undergrowth and soon had a bag load to take back for the freezer. A pair of eagles were floating across the sky and I have to say that I have never been a nature freak but as a tranquil setting, I dont think I have experienced anything quite like this place. It was easy to see why they had chosen to live here.

For the next couple of days they were both 'tied up' with a couple from Nottingham who had come for an advice course on house buying and living in Spain. "We have seen some people come out here as a romantic notion and then find themselves in trouble because they did no homework before laying their money on the table, there can be a lot of pitfalls for the uninformed" said Linda. I, for my part, was a tourist for a couple of days and went to interesting sites around the area. http://www.spanishvillageexperience.webs.com/ is the link to Will and Linda's very informative website should you have an interest.

VILLAGE QUIRKS
Willie related a few Spanish stories to me but one in particular had me laughing out loud. "This very Spanish, tranquil village has a PA system atop of the Town Hall and periodically they make announcements to the small population - the announcements are preceded by some music to get your attention. You would have expected to hear Spanish music floating across the place so I was amazed to hear the beginning of "Hit me Baby One More Time" before they started speaking". A week or so passed and Willie was chatting to the Mayor in a bar and said that he found the choice of that piece of music surprising, "Oh! well we have another one" said the Mayor appearing somewhat disgruntled. Two days later whilst working in the garden the familiar crackling noise from the PA horns suggested an announcement was forthcoming, "Linda and I fell about laughing as the opening bars of "Like a Virgin" erupted very loudly from the PA". "The next time I saw the Mayor he looked at me very proudly as if to say - "I told you so".

During the evenings we spent a lot of time laughing, playing music, singing, recording and chatting about the old days, gigs and Birmingham bands. I asked if they missed the City. "We went back two Christmas's ago and I visited some old musician mates and popped out to the Roadhouse to watch Roger Hill where I met up with Gibbo but we have absolutely no desire to go back at all, you can't re-live those experiences or times again and the place is now just too volatile and full of Coffee Houses and lacking in character. I'm proud of being a Brummie and look back with affection at my life there but my future is definitely here in Spain. Anyway, the Brumbeat website is fabulous and it gives me a 'fix' of nostalgia when I need it" 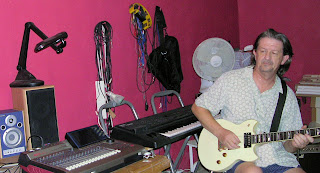 All too soon my visit was ended. We had a great time and shared endless bottles of wine and musical 'war stories', some of which are unrepeatable but I shall try and remember a couple for future blogs. I shall definitely be going back.................

DID YOU NOTICE.
As previously reported, the Spice Girls had withdrawn from the Mandela concert but Gerry Halliwell managed to sneak through a back door to grab a bit of limelight, I think she used the phrase "I'm with the band". It was very reassuring though to see that she had no microphone in her hand when it came to singing Happy Birthday.

OK, tune in next month folks when I shall have the normal panoply of bits and bobs and this and that. Also happy to say I've just received an e mail from another of my favourite guitarists and during the coming weeks will see if I can persuade him to 'issue forth' with some kind of article.
Definitely worth waiting for................