MAY - I'D LOVE A NICE RED ORGAN

Aah how nice, Spring weather out in the garden planting the seedlings under the watchful eye of Lucy, standing over me with a loaded dibber at the ready in case I dare make a mistake. "Careful with that lettuce", "Leave plenty of room in between" "Put that broken egg shell round the plants to stop the slugs from eating them" "Mum's coming for dinner", "Don't forget to plant french marigolds in your salad plot to deter blackfly". So rapid were her orders and statements of fact that I hardly noticed the 'Mum's coming for dinner' information, strategically placed in her stream of conversation like a well camouflaged hideout. It's a skill women have developed over many years and one that is a standard in their armoury of womanly wiles.

Lucy's Mum has one of those ride along invalid buggies. She doesn't have mobility problems but loves the fact that she can be a public nuisance whenever she wants. Her imminent arrival is always heralded by the sound of pedestrians swearing as she careers down the pavement. 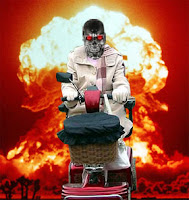 'Born to be an Interfering Sod' tattooed across her forehead, she ploughs through them uttering her high pitched war cry, "Cooooo EEeeeeee" that makes her sound like a black country red neck at a pig roast.


Nonetheless, she keeps Lucy happy and we all sit in a corner of the garden with a mug of tea. It's at this point that I realise that I am totally invisible, "Have you told him about marigolds" "Have you told him to do this....that...the other....". I sneak a look at the window to check if my reflection is still there, yep, I start to rise and walk down the path "Where are you going?, Mum's talking to you!" "He never listens to me Lucy" says Hildergard the Horrible, whisps of green smoke now curling up from her scaly nostrils. "Gotta do the Blog, I'm behind schedule" - so here I am in the safety and sanity of the Bloggery watching volcanic ash pile up on top of her head.

I'D LOVE A NICE RED ORGAN
Sounds like a phrase you might have heard in the back of many a van but of course I'm referring to the mighty VOX Continental. This piece of equipment enhanced the sound of popular music in the early to mid sixties. Keyboards were a great thing to have in a band but unless the venue you were playing at had a piano on stage you were sunk.

In Brum the electric organ first started with bands like Johnny Neal and the Starliners in the very capable hands of Ian 'Monk" Mutch and were huge cumbersome things built by Bird that had speakers built-in to the organ's sides. They kind of resembled an overstuffed armchair and needed an army of blokes to shift them about.

When VOX launched their truly portable organ in 1962 they were riding on the soundwave of success that the Selmer Clavioline had given to the worldwide instrumental hit 'Telstar' by the Tornadoes that year, it had also been used prior to that on Del Shannons 1961 hit 'Runaway'. 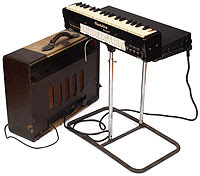 On a BRUMBEAT note, the clavioline was used by geeky Brum band, Second City Sound during 65/66 who recorded upbeat classical music instrumentals, Tchaikovsky One being their best known recording.

The Vox Continental's reedy and bluesy sound suited pop and R&B music down to the ground and most importantly it could fit in the back of a van and be carried up flights of stairs without giving the whole band a joint hernia! Unlike other organs it didn't have a built-in or attached speaker, it could simply be plugged into any amplifier. Even today this is quite a stylish piece of kit, it's 'Z' shape chrome stand was a nice aesthetic feature and enhanced its modernistic red and black colour scheme ('color' for you north americans). VOX had cleverly also reversed the key colours with the white keys now black and vice versa. Fully transistorised meant no broken valves to deal with unlike the Hammond Organ 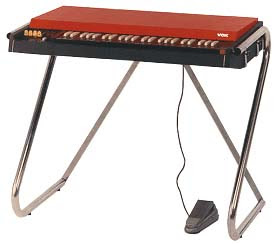 After it's launch it seemed that every band had one of these things, particularly after the Animals 'House of the Rising Sun' was such a success featuring Alan Price's astounding solo. Farfisa produced a portable organ too which did an equally good job but was ugly compared to the VOX, so it's easy to see why the Continental was the first choice. The sound of The Doors was down to this instrument too.

In the Brumbeat days, Birmingham's Jimmy O'Neil was probably the best organist around for some time and could make his VOX sing, he used it to good effect as the fourth member of the Walker Brothers to play the orchestrations to their hits, before they had the luxury of a touring band to back them. These days of course a good keyboard can emulate most other instruments but I don't believe that emulation is a replacement for a great looking and wonderful sounding piece of kit like this. I am only amateurish as a keyboard player but would genuinely like to own one of these. Are you listening Santa!!

THE CHADS. John has been busying himself at his end of the office and has just completed a brilliant updated bio of The Chads. This can be accessed via the Pie Stand or the Bio pages. This 'special' bio is dedicated to the memory of Mick Adkins and, for the first time at BRUMBEAT.Net, you can now listen to a soundclip of Mick chatting and the band in action.

BOB'S BITS. Thanks to everyone for your correspondence, it's an important asset to the running of this site because there's no story without you guys. It doesn't matter if you weren't successful. Every group that played in the midlands during that phase in the 60's was a contributor to the scene, so if you feel you have something to say or you have a nice photo you'd like to see in print, the door is always open and you can make contact at the address at the end of this blog.

WORLD CUP NEWS. Wayne Bridge has said that he will never play football for England again as long as John Terry is in the squad, following the scandal surrounding Terry's affair with Bridges girlfriend. England fans are hoping Terry makes a move on Emile Heskeys wife soon!!

Well I don't know about you guys, but I'm stuck between which bunch of thieving, corrupt, self serving, irresponsible tossers to put in charge of the country next. Tony Blair ran off to the middle east to hide before the shit hit the fan, with his puppy face antics and his dodgy property-dealing, 'ball juggling' wife. "Who Me?" "Iraq War? Definitely no deceit". To make himself look better he put Gordon Brown in charge of the shop - "There will be no Boom and Bust under Labour" said Big Gord ??
Reports are coming in that the WAMPS (Wives and Mistresses of Politicians) are holding a 'Shag In' to raise a few quid for John Prescott's pie allowance during the election campaign and Harriet Harperson is starting a "Be Nice to Men Fortnight", unfortunately though, owing to the pressure of electioneering to her feminist fanclub, she has 'regrettably' had to reduce that to 3 minutes. No surprises there then from the Equality Minister!!

On a local note I and the Boogie Band have been playing some fund raising gigs for Sedgetree's Independent choice, Mrs Gertrude Silent-Fart MBE, "GO Gertie, GO Gertie.......". (Note): Mrs G S-F MBE is sponsored by "Bobs Pork Sausages and Black Puddings, truly the Black Country's Best, Go on, Get one down yer Gob"