So 2008 is upon us. Its coming doesn't mean anything significant to me personally, another year nearer getting my pension and the loss of a few million more brain cells. On the other hand I had a nice Christmas and received a host of lovely gifts from the people I love. A few words of thanks to those who have given me some of their time and memories to pass on over the last 12 months. To those who promised something but just couldn't be bothered or perhaps felt themselves too important - we haven't missed anything so Happy New Year to you too.

Had a two week visit from my old cohort Oggie, who had made his way here via California, Vietnam, Laos and Thailand - I told him he should have just stayed on the A38 (but taken the back road through Lozells), he w0uld have saved himself 13,800 miles. 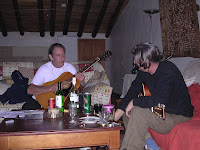 He and I (at an early age) made our first faltering steps towards learning the guitar, so we had a boozy fortnight full of reminiscences and playing. He played in a couple of bands around the Shirley area ( The Spotlights - mainly a Shadows type group and The Trekkers - a good little R and B outfit). He was also a member of the short lived group The Fashion before falling in bed with a certain girl and falling out with agent Arthur Smith. Oggie bought his ukelele with him and we went through a catalogue of really bizarre numbers that had us in peals of laughter. Nice to see you buddy, come back soon and bring a fiddle player with you next time.

December saw the departure of yet another of my old friends from the 60's, Kex Gorin. I knew Kex as a great mate in those days and he was always a laugh and brilliant company. We would always meet up at the Cedar club or the Rum Runner, in fact, latterly, he was the drummer for Paradox who had become the Rum Runners resident band for a while.

Like other clubs at the time, various musicians would get up occasionally and play a couple of tunes and probably the last time I remember anything specific about him was one of those sessions when myself and ex Redcaps brothers Dave and Mickey Walker got up on stage with Kex and played for fifteen minutes or so. It was a great 'blow' and Kex was great too, with his solid, effective drumming that made a band. About a week after that session, Mickey asked me if I would consider forming a permanent group with that line up. I declined but at times have thought that it would have been a good move......anyway......... Bye Kex, it was a pleasure to have known you and to have played with you too.

Just when you thought there were no more awards that could be bestowed on the Band of Joy, Zep man, along comes another.

He has just been voted best beard wearer by The Beard Liberation Front - what rubbish!! (do you think the BLF let beards go from uncaring owners during the night ? - watch out Woody!!). Whatever next for Plantman? - best greasy hair, heaviest downpour of dandruff in one shake of his hairy head.

It's so pathetic. No doubt I will be receiving letters of complaint from the Dandruff Protection League for giving away their intentions to honour him as well! Personally, I think he has fabulous earlobes - don't go changing Plantman. 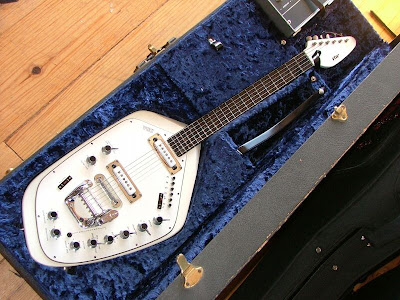 Remember this? The first attempt at a synthesizer guitar. VOX had the brill idea of combining the Continental organ into its lozenge shaped guitar (which I hated as a design concept). It was a real button pushers and knob twiddlers delight though!

I've got a mate who spends about two hours just tuning his guitar to his satisfaction only to find that after playing one number he has to start again - goodness knows what he would do with this, it would probably drive him out his mind trying to find a particular sound he wanted me to hear. 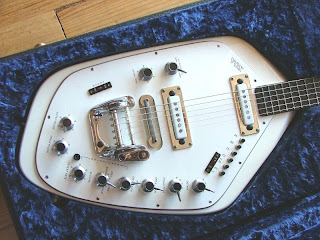 Still up for sale if anyone's interested? Just drop me an e mail for more info.

OK everyone, take care, look after each other and see you soon.