BULLS HEAD BOB - MAY - THE GRETSCH CORVETTE, THE ACEMEN, MADE IN BIRMINGHAM 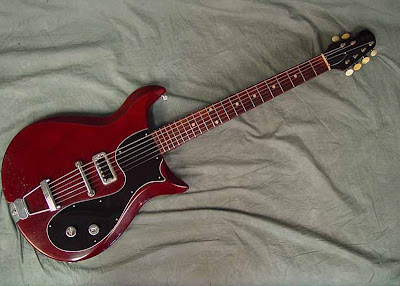 The best things are uncomplicated. If that is a statement of fact then the Gretsch Corvette fits the bill perfectly and this beautiful 1964 model would look fantastic in my hands!

I was always the 'Anti-Gretsch'.  Their large guitars left me cold and for some reason I always thought of Duane Eddy when I saw one. For me though, the "Twang wasn't The Thang", I wanted something that was dirty, something that would rip your head apart and then go and shag your sister. 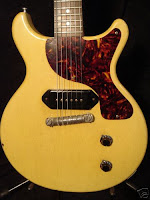 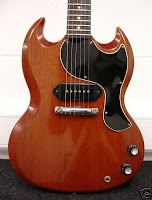 This guitar was a serious attempt to take on the Gibson Les Pauls and SG's.   It's body contours and shape are so reminiscent of a mixture of the Gibson double cutaway, that I used for some years, combined with the contoured SG body, even the translucent red colour of the Gretsch was almost identical to that used by Gibson.

It wasn't a clone as such, but Gretsch's way of being a little more modern thinking and I liked the idea, the guitar appealed to me in a simplistic manner.  It was very light and I loved the nifty cut-out at the tail to accommodate the strap button and trapeze bridge assembly, one volume and one tone control and sod all else, bliss!.

The headstock from 64, was quirky with it's 4 + 2 tuner arrangement, no makers name emblazoned across it either. The only hint was the engraved 'G' on the controls, classy... not something that the Gretsch design staff had been bunging out before.

I tried out a Corvette, at Ringway Music in Birmingham I think, and was quite impressed but too short of funds to really consider buying one.  I didn't think it better than a Gibson so wasn't tempted to trade in one of my other guitars, however I think it held it's own but with a cleaner, brighter sound, almost like a Rickenbacker.

In the end NOT buying one turned out to be a good idea.  'You are what you are" and my Anti-Gretsch feelings were soon proved to be correct when this stuck-in-the-mud company bought out "Girls Versions" called the Princess or the Twist, covered in purple sparkle and padding on the back.
Stone me! just what were they thinking?? Not only that, they started adding frippery and Bigsby's, wrecking what was a lovely, simple, serious guitar.  Talk about suicidal.

These days that same guitar body shape has been re-issued and is now known as the Gretsch G5135CVT - just like a vehicle number plate - or why not try the top of the range 'Stump-o-Matic!!' model that comes in British Racing Green with all the buttons and bells and even has a white "racing Stripe' down the length of the  body. It would seem that Gretsch have adopted 'car accessory' guitars, truly mind boggling, perhaps they got their ideas from Halfords or another car parts supplier. "Yeah go on, strap that bit on but leave room for another set of unnecessary switches".
"Does it make the guitar better?" - "Are you serious!!?"

Gretsch and Guild were the two companies that were the fuddy-duddies of Rock music, both had their feet firmly in the C and W market and never really were contenders in the solid-body rock stakes, but just for a moment there had been a glimmer of light, a ray of hope......the lovely Red Corvette nearly made them legitimate but they threw it all away and gave it to the girls.

THE ACEMEN
It’s common knowledge that I don’t like sterile cabaret groups. Slightly refreshing then for me to bring to your attention The Acemen. They’re not Brummies but Tom Lane, their drummer, has been resident in several Brummie bands during the 60's including Luddy Samms.  Tom is also the skin basher for Tuxedo Junction and he and vocalist/guitarist Murph of that same band, were  joined by manic saxophonist Glenmill, who along with the previous two, had been a member of the Leicester based, Tiger John Blues Band many years back. To round up the line-up they recruited Bassist 'Smokey'. 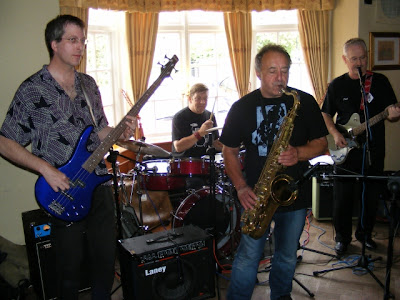 All old stalwarts of the music scene in the Leicester area, they got together in 2008 to do a favour for a friend and play at his silver wedding party. We’ve all done things like that, just got a few musical mates together and knock out a few songs for a party. No set list but just a quick rehearsal to agree what songs you know between you.  Tom decided on the name The Acemen as something uncomplicated, Glenmill however wanted to call the band 'The Skeleton Blaggards' or something more evil!  I have no idea how evil a Skeleton Blaggard is but he makes me slightly worried!

Three years later they are still together and that same playing principle applies to The Acemen, except they've completely abandoned the rehearsal part.  Turn up and start playing....."Shuffle in E, 1-2-3-4".........now I'm not really too sure if this attitude is something to be wholly recommended to musicians of a nervous disposition but their way of looking at it is, "We are enjoying playing this way and have no plans to change the format" which is great if you are good enough to play in that style and they certainly have many years of experience behind them.  "We are a jamming pub band and PROUD of it" said Tom.  Well hallelujah to that brothers and pass the pipe. The idea appeals to me.

It is said that if you are having a good time on stage then that enthusiasm  rubs off on the audience and they'll have a good time too.  If this is the case then I'm sure they'll be very popular with people "looking for a good time"!!  Wait a mo', haven't I heard that phrase before??

So, if you're in the market for a rockin band, then drop Tom 'Ace' a line at
www.theacemen@virginmedia 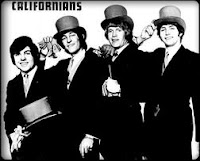 I expected some fall out about the Wolverhampton 'cabaret groups' blog last month, well maybe from those who might know how to write!  Surprisingly, I didn't get one single complaint from any Strollers fans but we did get an email of complaint from someone from a Wolverhampton band I'd forgot to include in my 'tribute', THE CALIFORNIANS.
Every picture tells a story.

Have pity on those from Wolverhampton,
for they shall be the Cabaret Bands.

If you happen to be in the area this weekend,
some friends of mine want to know if you fancy a beating pint
at the Cleveland Arms?

I'd gladly go along but as many of you know, I don't go out for pint's with musicians I chat about on the site,  I don't want to be seen to favour someone just because he got me arseholed.

"Oh wait a minute, if it's at the Cleveland Arms there won't be any proper muso's there"....

"See you Sunday Bish,
warm Brown and Mild if you please!!"


IN CONCLUSION
Just to set the record absolutely straight, there was a good band from Wolverhampton, however, I Googled "Famous or Great Bands from Wolverhampton" to get someone else's opinion, here is the list
http://www.knowhere.co.uk/Wolverhampton/West-Midlands/Midlands/info/celebs
This site appears to be compiled by someone from Wolverhampton or it's environs so reflects a 'local's' point of view.

I would like to remind them though that Noddy Holder is from Walsall, Roy Wood is from Birmingham, as were ELO.  Robert Plant was born in West Bromwich and raised in Worcestershire.   I do love the reference to the band who split in 2003 after playing IN EXCESS of 12 Gigs though!!!  wow...A WHOLE DOZEN!! ...they must still be exhausted poor little things.


MADE IN BIRMINGHAM - SUPPORT THIS SITE
You may recall my March blog about Alex's Pie Stand and the bikers that used to frequent that very piece of pavement, as well as the rest of the
night-people of Birmingham.

Our Brummie history is something that I am very proud of.   I love being a Brummie and hate to see our heritage being abandoned or destroyed in the name of 'progress'.   Our city once boasted a mass of vehicle and motorcycle factories, we were industrious and above all had a unique sense of working men's fun.   It was colonial style, lack-lustre management combined with 70's union greed that saw the vehicle industries collapse under the weight of Japanese imports.
www.madeinbirmingham.org/ is a site well worth contacting if you are interested in the industrial history of Birmingham and specifically Motorcycles.   Today some of those very same Pie Stand bikers organise  charitable motorbike runs and recently conducted an outing from the site of the original Alex's.  So if you're an old biker or even a new one, with a sense of pride in our industrial heritage and have a stomach large enough to accommodate a fair amount of Meat and Potatoe pies, you'll certainly be made welcome by JP and his Gang!!

There are some beautiful bikes at these meets and we Brummies made em' all, well not me personally - not with my delicate fingers.
The site is also actively and physically lobbying for an Industrial Museum to be set up in Brum and I for one, wholeheartedly support this venture.

The picture above shows the gathering for the BSA memorial run in 2004.
So go and get your bike cleaned up and contact JP today!   Brrrrrm-beat.

MIDLAND BEAT
Memorabilia collectors would have been watching E Bay recently when a whole collection of Midland Beat newspapers were being auctioned.  The papers featuring all west midlands bands sold in the region of 10 to 20 pounds each issue with the top price of 69 pounds being paid for the issue featuring The Uglys/Yamps.   Wish I'd saved my Midland Beats now!!

AND FINALLY....BOB'S ROCK BAND CONSULTANCY TIP
I've just been thinking about what Acemen Sax player Glenmill said about calling the band something more evil than a Skeleton Blaggard. I have an idea!!!.   Of course they can reject this suggestion but a slight alteration of their current name to "The Ass Men" will probably bring evil to them!... like I said, it's just a thought.   Peace and happiness be with you brothers and sisters...oh and get well soon Gerard, Up The Villa.