I have been late with the blog before but never so late that I have had to arise and start doing it on the morning of publishing day.   I had sat down to start it last week but as I was standing up to make a cup of tea my back went out!!  Stuff my old boots, only days before I had been grafting away outside watching Mrs Bobs progress on the new garden pergola and I never felt a twinge.

That being said, this will be a short blog as I can only sit in one position for a short time before I have to lie down again.   However, the Pony Express always gets through.


DEADLEGZ CHARITY RIDE
Everyone involved in the music biz in the 60's and beyond in Brum knew and loved the wonderful Pete Oliver.   I have, in the past, highlighted some great charitable work that has been undertaken by Rob Oliver, Pete's son.    I'm really pleased to announce another one of his fund raising efforts.    I have to say now that he doesn't do things by half, last year he tackled the Three Peaks Challenge and raised a considerable amount of money. 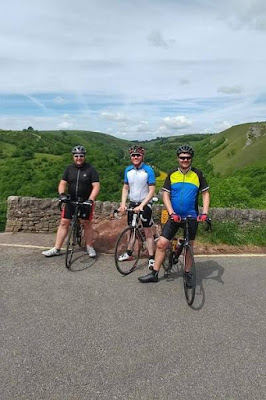 This year he has taken on a most daunting task and that is to cycle from Lands End to John O'Groats....1000 miles over a period of 10 days, and that is some distance on a bike.   The ride commences on 28 April 2018 and Rob will be accompanied by his Deadlegz mates Matt Wheeler and John Dicks.   I would have joined in of course if it weren't for my back!!

Maybe you have a bad back too or a dodgy knee or wobbly ankle that stops you from participating in this great personal challenge but one thing is for sure.....you can donate a little of your hard earned dosh to help those with Motor Neurone Disease AND Parkinsons disease too.

HOW CAN I HELP BOB?  Well first thing you need to do is visit the DEADLEGZ website and then simply consider how much you think you could help.  Although times are tough, one pound goes a long way when handled by a responsible Charity.  So please click on the link below to visit the site and give a little eh??

NEW MUSICAL EXPRESS
When I was young and dreaming of a rocking future I, like everyone else, was deprived of information about music.  Two radio programmes only a week that covered new music.  Easy Beat which became Saturday Club and the chart show on Sunday afternoon.    In Brum we had our own music paper Midland Beat which gave us local group information but  the New Musical Express was the music paper of choice.  There were a few others who were the NME's competitors but there were, in my opinion, second rate compared to this paper that had been published since 1952.

Being in a band you set yourself targets and my little band was no exception.
I was really proud the first time our band name appeared on the back pages of the Evening Mail ad's, then the next step was to see your name in Big Letters and naturally the next was you topping the bill with the name of some other band as openers.  From then I was over the moon when we appeared in the Midland Beat and I had the final accolade of seeing my name in the NME itself!!
It didn't get better than that in music press terms as far as I was concerned.

It was informative, light hearted and full of pictures of the bands and singers of the day with some great reports like Keith Altham and Ian McDougal. 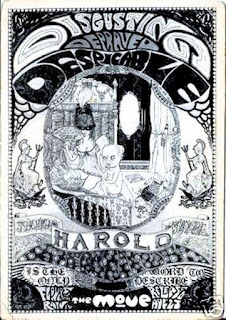 In 1967 Tony Secunda, The manager of The Move got the NME cartoonist, Ray Lowry I believe, to draw a postcard depicting Harold Wilson in a compromising situation with his secretary as publicity for their forthcoming record Flowers in the Rain.  He didn't inform the band of his actions but knew it would bring a shed full of publicity, and it did!!

He posted one through the front door of No 10 Downing Street and Wilson in his furore took the band to court the band got much TV coverage of them arriving at court, this propelled them into the depths of parental hate, which in itself was enough to make them stars in the eyes of the youth.   The Prime Minister naturally won the case with The Move or more singularly Roy Wood, being found guilty and it was decreed that the royalties for the upcoming release would henceforth be paid to a children's charity in perpetuity.

I went off the paper during the Prog Rock days with twits like Charles Shaar Murray pontificating about how important social statements were related to ponderous, noodling guitar solos from bands like Yes....

Sadly the paper has now closed, no-one reads papers in these days of electronic, cyber press and that's a shame.  With the likes of Facebook and Youtube everyone can pretend to be a rock star and post their own videos too.
So thanks NME it was the Best of the Best during its high days.

My question is, what happens when the lights go out and you are left staring at your lifeless plastic screen?

OK folks that's all the pain I can take.   Back next month with the annual trip across the seas to Our Brummies Abroad.