WELL HERE IT IS......DAT-DA-DA-DAAAA...IT'S COMPETITION MONTH
Sharpen up your brains, put on your thinking caps

At his Hairiest, how many Smarties, (M&M's for our friends on the American continent)could be hidden in Roy Wood's beard (including Upper lip area)?

Its SEMI-FINAL time in the competition and controversy is raising its head again. We don't have FOUR semi-finalists, WE HAVE FIVE!!! Due to overwhelming public demand (yet again!) we have re-called the only female Look-A-Like, Susie Farten to the line up.

WE, the panel, have whittled down the thousands of YOUR entries over the last few weeks and are now at that nail biting moment when YOU the voting public will cast YOUR votes to decide the two ABSOLUTE finalists in the "Jeff Lynne Look-A-Like" Contest.

WE, the judging panel, have based OUR selection of the five semi-finalists on an agreed formula of Headings:

They are as follows:

1. JEFF-NESS. Verbal intonations (pronounced In-turrr-nay-shurns), walk and posture, how to keep goo-in' on about multi-track recording.

3. PHYSICAL JEFF-ALIKENESS. A perfect physical resemblance is CRUCIALLY important and we have been MERCILESS in OUR decision making to ensure that only the perfect JEFF-ALIKES get through to the last round.

STOP PRESS: Knowing what a comedian he is, we have been "tipped the wink" that The Lord High Jeffness himself might have entered under a false name. Be cautious when making your choice!

We have put the four same questions to all the finalists. Their answers, alongside their pictures will aid you in your choice of contestants - remember we are looking for TWO finalists.

SO LETS GET ON WITH THE COMPETITION! 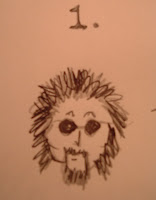 Fave Jeff Story:
"I'm always getting stopped in the streets by people because they think I'm Jeff. They never say it outright though, they stop me on the pretext of asking directions to places or to ask if I've got some spare change."

Fave Pastimes: Being Jeff, perming my hair and designing eye-patches.

Fave Jeff Story: "I changed me' name by deed poll to Horace Wimp-Thompson because I had the feeling that Jeff had me in mind when he wrote "Wild West Hero" due to the fact that I own a donkey."

Fave Music: Well Jeff of course -we are brothers cast from the same mould.

Fave Jeff Story: "The one about when I, I mean when Jeff left his guitar on top of his Mellotron. Or the one about "I'm staying in bed now - I'm a musician"

Fave Jeff Story: "I once told my best friend that I would run a mile just to kiss Jeff's lovely lips. She said that he would probably run a mile too.."

Fave Pastimes: Sticking Photos of Jeff just everywhere! Helping out Daddy and Mummy at the Agency. Brushing my hairs. Tattoos (I have a secret one boys!!).

Fave Jeff Story: My Queen, Hildegarde of Nuneaton, says that Jeff saved our sanity. She likes me to dress up as Jeff and wear that helicopter thing he used to have spinning on his head.

OH NO! - REFLECTIONS OF DORIAN GRAY?

Recent denials of Sanatogen 'Rider''demands by the Brum Rock band have fuelled a Press frenzy for the truth! 'Insider' information already suggests that a new black hair has been spotted on Steve Gibbons head prompting questions of dabbling in the dark world of age regression. Sounds like a case for 'BOB INVESTIGATES'! Report expected for April blog.

AAHH! SOMETHING FOR THE EQUIPMENT FREAKS

AMPLIFIER OF THE MONTH: 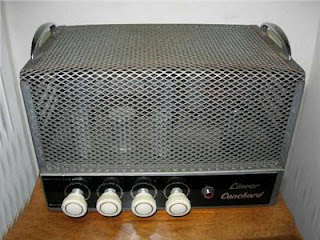 Hardly a beauty but most of the early Brumbeat musicians started with this as their first powerful? amp. Manufactured by RSC, its classic bird cage shape showed it as a “no frills” amplifier. It had two inputs, high and low gain, volume and a couple of tone controls. The good thing about this amplifier was its output. Although there were five models in the range, the ones that suited musicians best were those rated at 30 watts and 50 watts respectively (L30, L50). If you wanted to buy an amp that had that amount of output you would have had to buy a VOX AC30 or Selmer at a massive price difference. 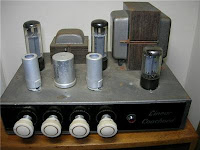 This amp is always in the background of all those early group pictures. A clean sound but a real little belter, heavy though as I recall. Once you bought one you had to go looking for a speaker from somewhere. Things just weren’t that easy then. Every guitarist worth their salt had a couple of spare Mullard EL34 valves in their guitar case.
Leak and Grampian also made 'clone' models of this amp.


SeeYa, look out for BOB INVESTIGATING in your area.

contact and contributions to Bobsbullocks@Gmail.com
Copyright all images and text. Bullsheadbob.