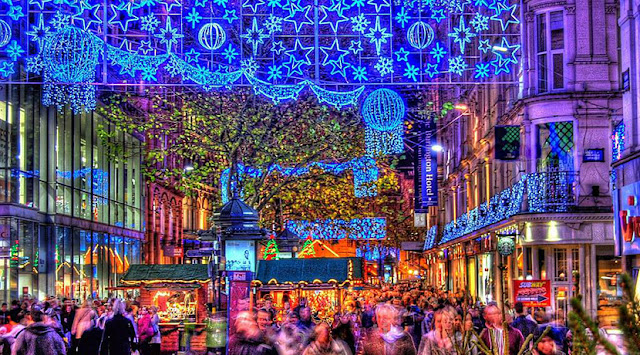 Doesn't it come around quick?   It's just as well too because as you know...
I LOVE IT!!
I put my decorations up last week, so it was pre-December and I've never done that before so I must be super excited this year.    I have been generous of spirit and generously full of spirits too, I'm a Brandy man these days, must be something to do with maturity and elegance, two words that certainly didn't apply during my youthful Vodka years?

I just love the warmth that is created by the Christmas lights in the City but am not a great fan of the German Market.
I really can't see the British culture in any of that stuff,  I mean since when was Bratwurst a traditional Christmas meal? 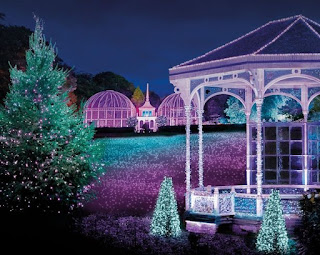 If you have tiny tots as children or have Grandchildren the best place to take them to this Christmas is to the Botanical Gardens where the lighting is spectacular definitely Santa's wonderland where the imagination can run free and you can invent all sorts of stories for the kids in that environment.

Very magical and old world just like the buildings used to be in the City Centre before the rise of the concrete monsters.

BOBS GUIDE TO BUYING SOMETHING FOR THE LADY
IN YOUR LIFE
or
LET'S HAVE A LITTLE THOUGHT ABOUT WHAT SHE NEEDS.

All my Christmas shopping has been done and I have excelled myself with my depth of wondrous imagination. 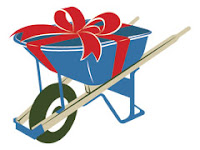 Mrs Bob will be surprised I'm sure, gone are the macho days of giving her wheelbarrows and spades, soldering irons (with assorted tips), roofing felt and other luxury items like that, because frankly, they were really difficult to wrap and I sometimes got the impression that she wasn't too keen on some of them.

I made a real effort to think on why she might not have liked one or two of them (though she definitely loved the roofing felt) and came to the realisation that I might have deprived her of her femininity?  You know, Women like to be loved, Women like to shop, Women like to make an informed choice on styles and appearance and they even like to read!!  I never knew that last bit. 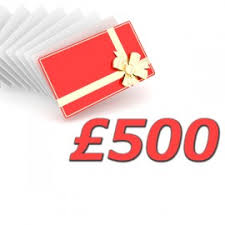 So one afternoon, after an away win by the Mighty Villa which had heightened my emotions, I popped into the snug at The Rat and Dodgeball for a frenzied hour of brain storming.   I had memorised every facet of her wants and feminine desires...  Love, Shopping, Making choices on style and appearance AND even included my new piece of knowledge about her....reading.   I knew at that moment just what to buy her and popped into one of my favourite stores that always has the perfect range of gifts and bought her a "500 pound GIFT VOUCHER" so she can shop and make her own informed choices and they gave me a book for her to read absolutely Free! Its made of actual paper and is really thick.

How lucky was that? got home, snuck it upstairs and put it under the bed, to be wrapped later.    I can picture her now after dinner, feet up on the pouf, a small Port, box of chocolates, Gift Voucher and a good book to read. 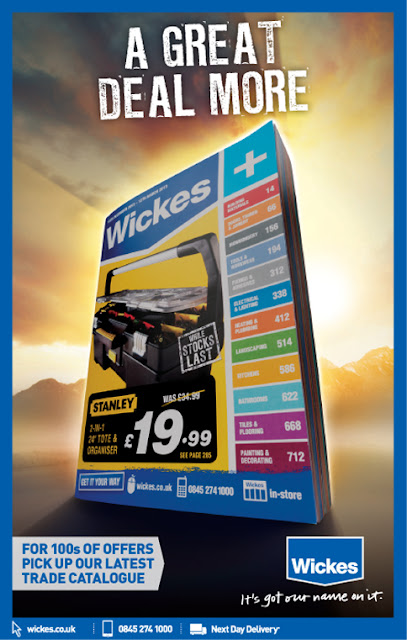 There's such a lot in it.  So there you go, I don't mind sharing a good idea when it comes along.   I was going to read the end of the book myself but I would have been tempted to tell her how it finishes

ON THE SCENE IN BRUM, AND ITS SURROUNDINGS.

I remember buying the Midland Beat magazine every month to see who was playing with who etc....

As this is no longer in existence, like the majority of the groups who featured in it in the day, one has to rely on word of mouth for any news of the Brumbeat survivors club.  One good source for all this gabbling is the contact in the guitar shop at Stirchley namely, Bob Styler.   These days he's talking about himself as he hops into yet another band in the search for more gigs and glory.

Bob is an avid aficionado of 60's music and will go to great lengths to play gigs like any of us muso's and has recently spread his wings to embrace the more raucous side of life by joining with a band from Kidderminster who play all out Rock music, you know, covers of Free and Lynrd Skinhead and his band too.  He answered an ad in some paper or other for "Guitarist/Singer wanted for cover band" as he filled all the requirements.    It came as a surprise to Bob to find he was enquiring to join a band whose founder member was John Tricketts, a drummer whom Bob had played with in a group called The Fashion back in 66!!
So Ladies and Gents I present:
THE TRANSPORTERS 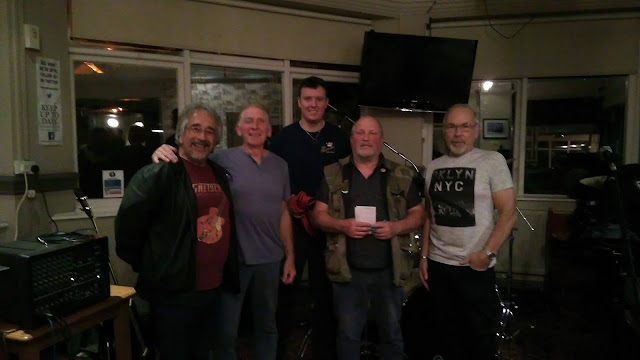 Bob far right and John Tricketts second left.   Along with some comparitive young un's they will be gracing the stages of well known boozers starting now, they have already got some gigs under their belts so keep your eyes open and catch them "at it" if you can.   They have a Facebook page too where you can make contact.   In fact get the band for your Christmas "do" and then  you'll be "Alright Now".
GREAT GRANDAD!
Many, many Christmas congratulations to the great Dave Hynds, ex Cheetahs and Fairfield Ski drummer and songwriter on becoming a great grandfather, I can't think of anything nicer, the whole family together, Christmas dinner and that fabulous smell of new born babies.  The best Christmas gift of all.....well apart from an original 1956 Les Paul.. FINALLY.
It's been a crap year in many respects on the world stage as The Russians and Americans find even more hideous ways to kill people.   Donald Trump is an abomination and a disgrace.  The Americans definitely got what they wished for thanks to the Russians.   Happy Christmas America.  Hope you wake up soon.

Thanks to all you lovely readers and commentators on the blog.    Thanks to the gang at the boozer for their continued piss-taking and a special thought for those Brummies Abroad who are missing out on all this Brummie fun.  Lastly a Happy Christmas to my old friend The Skiffle King and his Gang of creative offspring and super talented lady.    Wouldn't it be magical if we all woke up on Christmas Morning to find that Father Christmas had bought us all a present as well as the little un's.    Best get to bed early on Christmas Eve then..... I don't count sheep these days, I go straight into my hippy mantra.....Lespaulgoldtop, Lespaulgoldtop, Lespaulgoldtop.

Lots of love and affection for you guys, lets hope we get a bit of peace next year