Whilst doing things I was thinking which of the Brummie bands would I like to see again?  Well there were a few so I thought more about local music influences on me and the first name that always comes to me is The Redcaps.

During my early youth I, like most of my generation, was deep into Cliff and The Shadows, mostly the latter on my part.  Apart from listening to the Radio on Sunday afternoons for the Pop Charts there were no other modern music shows so I do remember waiting for the charts, guitar poised on my lap ready to try and learn some instrumental as it was being played, you only got to hear it once a week if you couldn't afford the record so you had to be bloody sharp!!.  If it was a song I wanted to learn, my Mum would be taking the lyrics down in shorthand for me, I would then rush upstairs and play it to death for hours whilst it was fresh in mind, my Sisters would be shouting "Mum, make him stop", she never did. 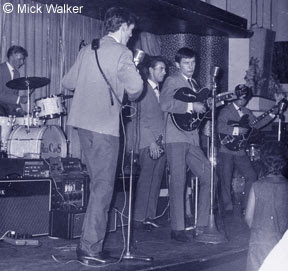 It wasn't long before I got the real music 'bug' and in the next couple of years I had improved to the point whereby I thought I was getting to sound good, then one night my older brother, for some unknown reason of generosity, said he would take me to see a good group he knew of.  I can't remember which dance hall we went to but the band was The Redcaps.    I wouldn't have been the first person to think to themselves "These are a seriously good group" they had some real 'dynamic edge' to them and they would have been the biggest band in the UK had they got the right breaks.  The familial voices of and harmonies of Mickey and Dave Walker were as close as you'd hear and my belief that I was now a better guitarist took a real knock that night.  I learned a lot about stage projection from them too, they really had it all, great voices, great musicians and they could really put it over well, incredibly good Beat music.  I mean just look at the kit on that picture, a row of Gibsons and Vox AC30's and VOX PA, Binson Echo and I'm not sure if that piece of kit next to the Binson is a Meazzi??.  The sound combinations would have been seriously driven and Mickey Walker and Alan Morley were a good engine room for the band

I went home feeling excited by what I'd just seen and heard and realised that I had a lot to learn and woke the next day with a degree more of ambition to improve.  There have been several of my muso compatriots, recently, Bill Bonham from the same period, who too were influenced by this amazingly good band.  Another of those muso's is the very nice Brian Nicholls who recently interviewed Mickey Walker and Alan Morley, bassist and drummer respectively of The Redcaps so we should be on the lookout for an update to their Bio on the BRUMBEAT.Net page soon, click here THE REDCAPS BIO.

So would I like to see The Redcaps again?, well all the circumstances have changed so much in that respect it just wouldn't be the same as back then,
it wouldn't have the same impact as then, luckily though not all the members of those great bands have stopped playing.

THE SALOPIAN DUDES
The hot poop from Brian is that Mickey and Alan have recruited Telford guitarist, Steve Field and are going gigging again, this time under the guise of 'The Salopian Dudes'...........now don't ask me where they got the name from
but I'd almost bet that it was born from a Sunday lunchtime session with a carry-out back to the garage to knock out some 'good ol toons'.

Well here we have a video clip of the SALOPIAN DUDES in a garage and, seen lurking in the background is the aforementioned Brian Nicholls, the Gandalf of Black Country music.   They have already done their first gig at Worfield Cricket Club in May and I'm sure I'll be getting some updates to pass on to you all of when and where they might be gigging at.


I love the written comment on the Youtube clip, "recorded in the 'actual garage'"  I just thought, this could be the very garage, where they thought up the name too, makes you think doesn't it?.....

Gotta say that your'e looking good Mickey and both you and Alan are playing  well, and incidentally Mickey, if the name was your idea then, "brilliant mate! what a corker of a name, couldn't have done better myself".  You should have got yourself a Gibson EBO though to give us some of that Redcaps bass end sound.

So anyway, bless THE SALOPIAN DUDES and all who go to see them.  They recently played at Worsfield Cricket Club so keep your eyes and ears open and get ready to see part of the greatest band in the West Midlands history back on the stage.

I'm sure you won't forget their name.  A lot of us remember The Redcaps influence on our past, so God Bless guys give it some "stuff".

Right you guys, I'm packing my little suitcase and heading North where the women are women.