Just two months till Christmas!! Now I absolutely love the Christmas festivities, in fact I probably enjoy the lead-up to Christmas rather than the event itself, although these days I don't get the obligatory 'knee trembler in the cupboard' during the works party or, in fact, the Works Party either. 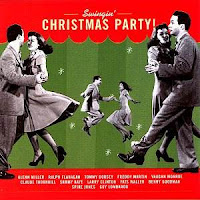 As I missed that sort of thing, last year Lucy and I decided to have an 'adult' Christmas role-playing game, we spent the afternoon getting absolutely ratted on cheap champagne, scoffing vol au vents and mince pies. I had suggested we dress appropriately for the occasion but unfortunately Lucy, lacking a little imagination, dressed as the office cleaner, not the eager little strumpet that one normally finds at Christmas parties. For added authenticity she had smeared herself with Johnsons Lavender Wax Polish to give that ambience of bonking in a dark space. A laddered and wrinkled stocking was fetchingly draped around one of her ankles like a flacid brown eel, a half smoked ciggie accentuating her diseased left ear took your eye to her hair tucked teasingly under a headscarf covering a couple of rollers that peeped out from the sides of her head like torpedo tubes on a Motor Launch. She suddenly leered at me.... and said the magic words "See you in the cupboard Tiger". I was off...to the cupboard under the stairs.

There's one consequence of getting older that never entered my head when planning the event and that is the problem of memory loss. From the living room to the hall cupboard is less than 10 seconds away but more than enough time for me to have forgotten what I was going there for in the first place. On entering the door I spent the next three hours happily sorting out a jar of nails and screws into sizes. Likewise, back in the living room, Lucy had checked her appearance in the mirror, saw that she was dressed as a cleaner and started washing down the paintwork...

EXCLUSIVE - I LOVE THE MOODY BLUES?? 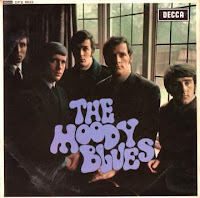 Over the past couple of years I have to admit to being less than friendly towards the Moody Blues. However that wasn't always the case. I loved the first line up of that band, as an R&B group, with Denny Laine and Clint Warwick. They really were BRUMBEAT in every sense.
So as a form of Christmas present to our faithful readers and especially to my fellow lovers of The (R&B) Moody Blues, we are really excited to bring you yet another BRUMBEAT EXCLUSIVE and let you know that, after some gentle persuasion, I have recently interviewed the great Alex Wharton, Manager and Record Producer of the Moodies. He popped into 'the snug' for a pint of loosening juice and then we talked at length about the recording session that produced one of Birminghams best records of all time, the epic "Go Now". Alex sheds light on his particular difficulties of the recording process and touches on a couple of other subjects too. You read it here first...... The interview will be appearing on the main site in December - this is too good to miss!!

ON THE OTHER SIDE OF THE COIN!!
For those of you who didn't know, the (after R&B) Moodies have a 'Ride' named after them at an American theme park, how grandiose! 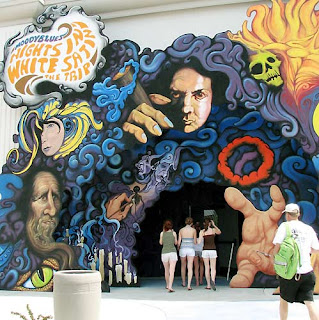 Although I haven't been on the ride myself, I imagine that you enter the ride, then they strap you tightly into a chair and play Nights in White Satin at you until you fall asleep. I suppose they could get through 10,000 people an hour...........the upside is you come out feeling refreshed but not remembering the ride at all. What a trip!!

ANOTHER SURVIVOR FOUND ALIVE AND WELL!!
Last months mention of the reunion of J Neal Esq and Norm Crandles, has brought another BRUMBEAT muso out of the woodwork, in the shape of Paul Brunt who played lead guitar with both of the aforementioned Brummie vocalists and also played with Ace Kefford, Nicky James, Jimmy Powell and others. Nice to hear from you Paul - he's still playing if anyone wondered.

GET LISTED
Were you a member of one of the following bands?
If so, Chris Smith would really like to hear from you in his quest to complete his book Brumbeat and Beyond. Some of the names of the group members are included where known. Chris would be very happy to have any information about any of these acts even if you weren't a member of the band itself. Chris can be contacted at http://www.smithc711@aol.com

COMING SOON. Look out for forthcoming 'In the Snug' interviews with some past stars of BRUMBEAT. We only bring you the best.