Brum Rock 'spokesperson' L Hornsy Esq, Had informed me that I had been wrong to suggest that their exhorbitant backstage 'Rider' requisites had included Sanatogen. He further suggested that they were not guilty of taking "Fortifying liquids" and had only shared the occasional "group laxative". His full statement can be read at Bulls Head Bob Blog for Feb 2007 of this inst..... 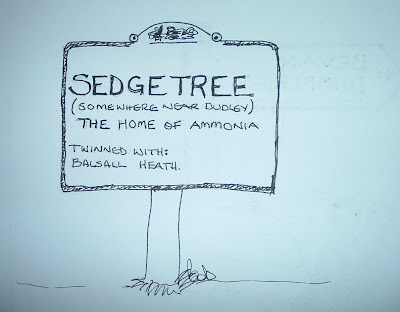 Smelling a rat, I went on the 'blag' for a free ticket for the Sedgetree Community Centre gig (somewhere near Dudley), to see if I could throw some light on the truth. Fortunately, I bumped into Susie Farten, (daughter of Recording Magnate and Manager, Ron Farten) who said she would give me a ticket to the gig if she could go along with me. She's not the worlds best "looker" and has an uncanny likeness to Jeff Lynne - without the hair. She says she's "Got a thing" for Steve Gibbons - I dont know what sort of "thing" she'd got but there was a smell like an old piece of hake coming from her handbag. Susie thinks of herself as a sort of Black Country, Paris Hilton without the looks but with the money, calling herself a "Groupies Groupie" - "been with em all" - "Oooh! If I can get me hands on Trevor Burton - I'll give him a 'Night of Fear' alright" ........

Being a hands on investigator, I knew that I would have to "blend in" with my surroundings to thoroughly penetrate the Brum Rock entourage and so I hit the local charity shops to get my outfit. Denim jacket, beads,bells, false droopy moustache and a pair of green Loons, what a perfect disguise. I practiced my dialogue, ending every phrase with Yeah Man! or Far Out, Cosmic... etc.

Our arrival at Sedgetree was an eye opener, there was a real party atmosphere. Huge banners were hung across the streets, some declaring it 'Sedgetree Sixties Day'. and another saying 'Sedgetree Welcomes Danny King'. I spotted the Mayor, Councillor Gareth Trousers. He told me that the whole population of Sedgetree were very excited and had been inspired by tonights Brum Rock gig, to celebrate a day when all things pertinent to the sixties would be re-enacted by the whole neighbourhood. "Its amazing, just everyone has joined in". The climax to the day's events will be the nights concert.

"We've even named the Park toilets after Bev Bevan and once he's done the Official Opening Ceremony they will be known as the "Bevan Dumperies".

" I think his name will be known long after I've gone" said Mr Trousers.. "Im going to offer him the opportunity to have first go!!". 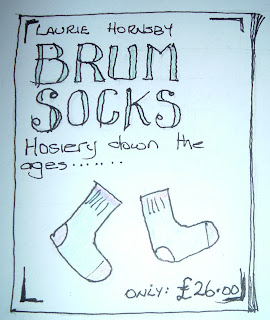 Local newsagent, Elsie Bottoms, has a large sign above her corner shop advertising a "Book Sighing by Lorry Hornby" "He's signing his new book about clothes-making in the Midlands" said Elsie "Its called Brum Socks". "I really like him, he's got a kind face, he can write and wears glasses, so he must be the intelligent one".


I dropped Susie off at the pub where there was a "60's Arm Wrestling Competition" taking place. Knowing that she would get through to the last round, I went to scout around for the Community Centre to plan my surveillance.....how can I get to see if there's any Sanatogen about? As if by magic, I heard the sound of an approaching large vehicle, I ducked into a doorway just in time to see a van covered in lipstick messages, mainly saying "I love Bev" go by. There must have been some engine problem because I noticed that there was a lot of smoke coming out of the windows, it had a strangely familiar smell?

I quickly jumped in the car and followed the van to the Community Centre. A large welcoming crowd had gathered and as the van pulled up there were cheers and screams from the enthusiastic throng as the varied members of the band fell out of the vehicle. I could tell that the band were "very emotional" by their red eyed expressions.

The Press were thrusting microphones into their faces asking questions about their alleged excessive intake of Fortified Wine and was there any truth in 'Bulls Head Bob's' disclosures. Steve said some words that were totally lost to me but he finished by saying that everything was "really Far Out and Cosmic". I secretly praised myself for having the savvy to practice my wordology earlier that day.

The Mayor then took the microphone and said "Ladies and Gentlemen, to celebrate and authenticate the re-arrival of the swingin sixties to Sedgetree (somewhere near Dudley), the local Town Committee has authorised the release of a 'small but significant' toxic cloud from the chimney of the now defunct Ammonia Plant". He pressed a button, his 8 year old daughter Saffron played the opening few bars to ELO's Birmingham Blues on her ocarina whilst the chimney coughed and belched out a kind of green and yellow tinged smoke ring which boiled in the sky for a minute then slowly spread across the town, hovering just short of the community centre. "Oooooooo, said the crowd", "Wow Yeah, Hey, like Smoke, very cool Man " said Steve.


Bev was rushed to a waiting Ford Anglia Limo to take him to the 'Dumperies' and Laurie mounted the pillion seat of a psychedelically painted Honda 50 moped, to whisk him off to his book signing. 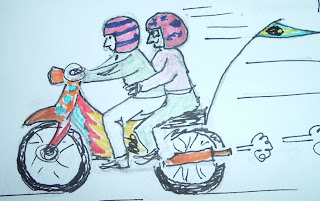 The rest of the band signed autographs and posed for photos, Danny obligingly doing some of his Rock n' Roll 'moves' and Trevor did his best "snarling face" routine which, I understand he did for the first time as he exited the womb. It certainly made little Saffron shed a few tears. He did smile at her though, as he crushed her ocarina under his boot heel. I hung around in the car, not wanting to give me'self away. The crowd thinned and departed and the band walked into the venue. The evening sky was darkening as the roadies started off-loading the equipment. I mentally cursed myself for not bringing a camera but found a sketch pad in the glove compartment.

I was about to leave the safety of the car to have a closer look inside the van when the Anglia Limo pulled up and Bev got out saying to the mayor "Groovy Man, thanks a lot for that, flushed first time too, Far Out!". The limo pulled off and Bev made his way towards the venue, pausing for a moment at the side of the van, probably to read some of the fans messages. He was now wearing a badge which read - " I've Pumped at the Dumperies". In my attempts to see more, I accidentally leaned on the car horn which took me and Bev by surprise and he scurried inside. I noticed he had dropped something as he disappeared through the rear entrance of the Community Centre I got out of the car and rushed over to retrieve it.


The roadies returned and carried on emptying the cavernous interior, amps, scenery, lights, guitars and drums. Outside the venue was an old victorian street light which sprung into life as the sky darkened further, casting a beam of light magically into the now practically empty vehicle. There was one red box in the far corner that had some indistinct writing on it. I made the decision to investigate further and hid around the corner, craning my neck to try and get a better look at the writing, hoping that it might say Sanatogen. Luckily for me the roadies were very slow which gave me all the time I needed to get my hands on the box and have a good "furtle" around. 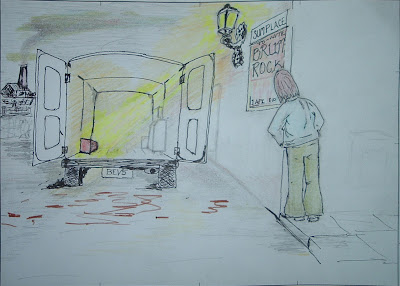 The writing on the box said "AFTER SHOW ACTIVITIES BOX" - and was sealed with a large padlock. Luckily, I had mastered the art of lock picking some years earlier and soon had the lid open. After the removal of some "Adult Toys and Material" which comprised almost 90% of the contents I was left looking at Senapods, Pro-Plus tablets, elasticated bandages, hair tonic but alas no Fortified Wine. Had I been wrong in my assumptions? A box of Fleur de Lyse pies, A Draft copy of an agreement to make a Mr D King (being the first party of the third part.... etc) the new face of Stannah Stairlifts. I imagined the commercial - as he slowly ascended the stairs, his face rising above the bannister rail, he would burst into song. "Fly me to the Moon" or something like that. As a follow up to that they could do one of him descending the stairs and as the chair touches the bottom stair he could sing "I'm Down" by The Beatles.

I was beginning to think that I had made a blunder of blunders, no evidence of fortified wine at all - but 'Lo' in the distance I could hear the tell tale 'Plop" sound of a cork leaving a bottle neck followed by the clink of glasses and cackling laughter. My adrenalin started rushing! I snuck into the back exit, sketch pad ready to do a 'flash' drawing. I opened the dressing room door, a voice shouted out "He's behind you"................Laurie turned round, glass in hand, and there, the tell-tale red ring around his lips, visibly getting younger, the definite sign of................then nothing. I awoke the next morning in the local hospital dazed and confused.

"Where am I, Is this a Dream. Have I been the subject of some April Fools jokery?"

The headlines in the Sedgetree Morning Gazette read. "TOXIC CLOUD SENDS SEDGETREE TO SLEEP" - The Deputy Prime Minister had made a statement to the effect that it was just a piece of "Harmless Toxic Fun" and he would gladly take care of the pies if no-one else wanted them. - "Damn and blast it" I thought, foiled again by those pesky Brum Rockers - " I'll get you next time ". I reached over for my trousers and pulled from my pocket the item that Bev had dropped when I accidentally hit the car horn...................................... 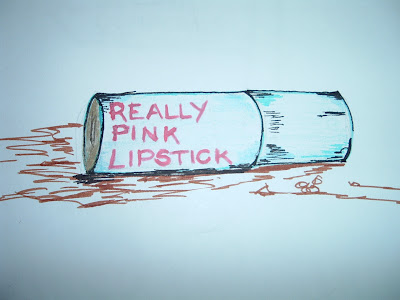 Check out here: www.brianyeates.co.uk/tours/rocks.htm for forthcoming Brum Rock tour dates 2007. Watch out for the wine!!

REMEMBER. If theres something that needs a good looking into - BOB's On The Case........ 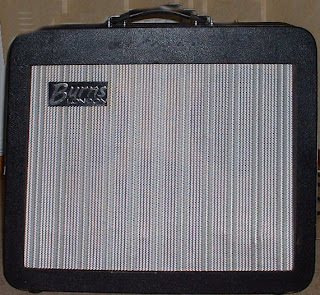 The Burns ORBIT guitar amplifier was the first ever transistorised piece of kit.

I tried one out in Ringway Music. It was very light to carry, in comparison to the equivalent Selmers and Vox's which meant you didn't have to do your back in, lugging the thing up five flights of stairs, as was often the case at some venues in the City. You could buy an extension speaker cabinet for this too. The Burns publicity statement for the amp said that to test it, it was thrown from the top of the factory roof onto the road below and when they plugged it in again - Bingo! it worked.

The thing is, it sounded rubbish to start with. The controls were unresponsive and the sound far too clean. Personally, I think they should have kept throwing these amps off the factory roof till it either improved the audio quality or there were no more left to throw. If you own one and think that it does sound good, I would make an appointment with an Audiologist.

It's worth a mention only because it was the first of its kind.

Remember to check out the second article in the Six of the Best series. "Walking on Broken Glass" written by Brumbeat musician Danny Gallagher about his beginnings and the recording of the first BRUMBEAT LP.

See Ya Next time

Contributions or comments to: Bobsbullocks@gmail.com