There's not much of interest going on around the city that has any relevance to Brumbeat for this month so I thought I would take a trip down "Guitar Memory Lane" and look at Burns Guitars. (I have not included all models and I am not a guitar 'Nerd' so please don't pick me up on small points like the amount of screw heads on the scratchplate etc).
So many of the early bands were equipped with this make of instrument so, let's start with: THE VIBRASONIC, a budget guitar of great quality though it was as ugly as sin!! I could never comprehend what the designers were thinking of when they started work on this guitar, its awful appearance however, was more than made up for by its technical specs and its range of sounds. 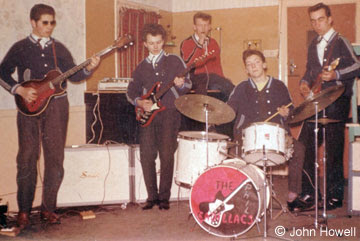 (Selmer Amps,Watkins Copycat, Framus Star Bass and (centre) Burns Vibrasonic) - Johny Shane and the Cadillacs.
This guitar had a sister in the shape of THE VIBRA-ARTIST that was equipped with fewer knobs to twiddle about with. It was a popular choice for those starting out on the rocky road to constant misery. It had a kind of Telecaster headstock but the rest of the guitar seems to have been designed by a committee. The small body looks incongruous fitted with a Bigsby type Tremelo with its arm covering the whole length of its podgy body. 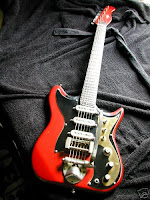 OK, so Burns had grown up a bit and produced a really good guitar for the time. The Vista Sonic was produced as a 6 string and Bass guitar and had remarkably good pick ups and less twiddly knobs. 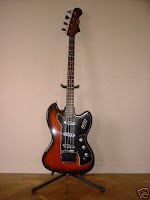 The headstock of this guitar looked as though a giant had taken a bite out of it with its serated edge. Someone must have said something about the body of the earlier models being small because all of a sudden the bodies became massive. One large bodied model that caught my eye and which I tried out for a week was the Burns TR2, a semi solid with controls cleverly hidden beneath its scratch plate and a smaller Tremelo arm. 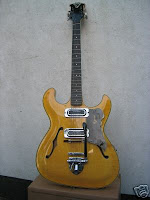 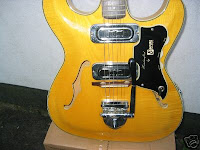 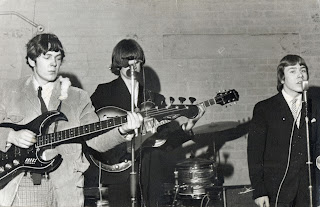 The Black Bison was a monster of a guitar (here shown in the expert hands of Leigh Higginson, The Yamps). The sheer size of this thing was incredible and though it produced a good sound it soon lost its popularity with guitarists developing weak shoulders because of its unwieldly weight.

The model range was augmented by the Baby Bison, a smaller and more manageable variant for those who didn't need as much Horn!! 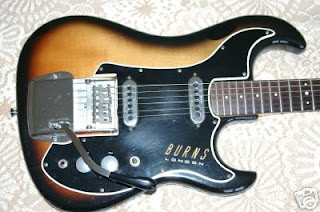 A big piccie of this model. This was a very, very nice guitar to play. For once Burns got it right with the right size, right amount of controls and a fast neck. This was really the Spitfire of the range, it looked like a good guitar should and played just as well. If you own one of these beauties look after it. This model was also available as a Bass.

Burns guitars must have thought they had cracked it when The Shadows changed from Fender Stratocasters to the Burns Marvin.

The company should have seen what was on the musical horizon though with the emergence of The Beatles. Guitars that had been designed to play instumentals were becoming a thing of the past. Far too clean in its sound and far too prissy to be cool,(that awful looking headstock) the model sold in small numbers only. The model was reintroduced in the Nineties for those who wished to reminisce but I can't really think that it was a good idea. This is the sort of guitar for groups who played working mens clubs whilst doing the Shadow Stroll but outside of that not much use to anyone.

For lovers of this instrument, you probably think I'm talking out of my arse but at the end of the day its only my point of view.

Anyway Brummies thats it for now, except to say its Valentines Day this month so remember the one you love.