I AM BOB ZIMMERMAN - WINDOW GAZER
I was mulling over a story I did a short while ago about being a music shop 'window gazer' when I was younger and it made me think about the reason behind it's attraction.  It's a bit like wanking, we all did it but hardly own up to it!... standing for hours just looking at a particular musical instrument.  Why did we do that? nothing stopped me from doing it at all, fog, rain, snow, desperately scraping the ice off the window to get a better view during the depths of winter.   Was it in the firm belief that this instrument would suddenly pass, magically, through the glass into my hands? The fact that there could be nothing to gain from this activity never entered my head, in reality it became almost addictive.  I even recall walking away from a window for about a hundred yards and then returning to have another gander for half an hour.  Nowadays some 'PC' git would say I had Obsessive Compulsive Disorder....no I didn't you tie-dyed tosser, it was called being in love with a Gibson!!  She was young, curvy and attractive, in a cherry red sort of way.  Scrupulously clean and shiny beyond belief with a couple of knobs I would love to get my hands round.

It was a form of masochism though, because you knew, for sure, that one day the guitar or whatever, would be gone and you would experience that ballsaching, heartbeaking sensation as your stomach plummeted to your scrotum with a hefty thunk!.    You found yourself tentatively looking around in disbelief, making sure no-one could see you in your state of shock.  And then... Shit! there's a soddin' trombone in the very place that your guitar stood, lazily resting on its stand, I'm not gonna stare at that thing, a trombone!! of all the things to put in it's place? you're secretly grateful though, that they didn't put a kazoo there, that would have been just too insulting.

Why have they changed the display?, they know I come and look at it everyday.  Panic- stricken, you press your face flat against the shop front window searching the darkness within to see if there was a trace of YOUR guitar.  Where is it?  Your face is contorted into all sorts of unflattering shapes as you drag it down the window.  The disappointment comes flooding through your soul as you realise that it has gone forever and off you go, head down like a rejected lover, trapsing the streets, rabid with rage and swearing your allegiance to some other music shop.  Great big smear down the shop front though, that'll serve them right?

These days I am more than a few years older and a lot wiser than then.  With a mature outlook on the realities of life, I look back and laugh at that aspect of my youth and foolishness - as I find myself, along with four other guys, staring through the window of the 'Incontinence and Walking Aids Boutique'.

I go every day, with Wednesday's off for a spot of  'sexual therapy, wiv' her indoors'...yay!!

I know that one of the 'window gazers' is secretly admiring a strap on, leg-bag, cause he's the only one at the controversial 'Incontinence' end of the shop front.    The other three and me, at the safer 'walking stick' end of the window, had all been musician window gazers too!   None of us, even 'Strap-on man' need any of the services available there!!   It's just that the glass at this particular shop is always washed every morning and we can do some formation nose-pressing in hygienic circumstances, if we have a mind to?

"Mmmm! a  new model, three pronged Zimmer!!.   If I ever needed one - thinking ahead - I bet I could walk twice as fast with that model, plenty of grip from those bulbous rubber feet, maybe I could cut some grooves into the rubber, for wet weather conditions, even carry a second set - Slicks maybe for 'warm pavement' situations? They would definitely help during a bit of child-swerving and avoidance techniques at the school crossing chicane!!"

There could be money in this.  Maybe I could get Lewis Hamilton to endorse a 'Signature" model, he's just perfect in the wet.....?  "OK guys, noses at the ready........press away".

I am thrilled to hear that Roy Wood has been given a Mojo 2010 Classic Songwriter award in their honours list. Roy is a true Brumbeat hero, great bloke, not full of bullshit like some others. This is great news indeed. I can almost forgive 'Curly'.

MEMORY LANE GIGS...Once again, your man on the street has been rummaging around his cyber drawers to help restore your recollections of the incredible music scene of Birmingham, and its environs, in the late 50's to late 60's.

THE ADELPHI, WEST BROMWICH
The building that was The Adelphi in New Street burned to the ground in 1971, however, I managed to find some film recorded inside The Adelphi during an ATV dinner dance in 1962.   I believe that this is the only inside footage available, you lucky people!  It was a little before my time as a proper musician and it's silent I'm afraid but it would appear that even then, in the audience were two Mackeson fuelled revellers who thought it would be 'super' to take their bikes with them.  Also a couple of "swingin' birds" winning a TV.  Brings a tear to my eye........enjoy.  Dancing scene from a 'Bands Eye" view.  A great but short piece of film history.  Click Below:
http://www.macearchive.org/Media.html?Title=2926#

EVEN MORE OF THE GREATEST GIGS IN THE MIDLANDS
THE CARLTON/MOTHERS , ERDINGTON          THE RITZ, KINGS HEATH 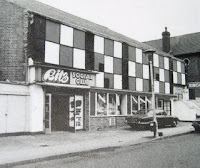 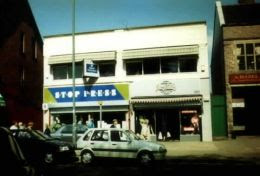 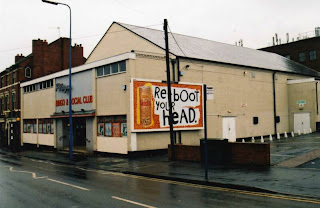 I played at all three of these places a few times with The Plaza being one of the favourite places because of it's revolving stage which provided a great dramatic entrance, whizzing round as you were announced.  If you didn't have a road manager the last number could be a bit of a nightmare though.  As you finished your set you had to run to take the leads from the back of your PA speakers because as the stage starting to revolve again, in the opposite direction, it would drag them crashing to the ground. The Beatles and Stones both gigged here along with every great band of the sixties.
I've read recently that the place opened again in May for live music though it will never re-live those days when every band, that ever was, regarded this place to be almost hallowed ground.
PROBABLY THE TRUE HOME OF BRUMBEAT 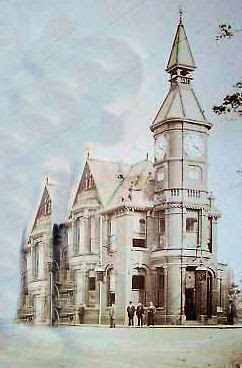 YES SIR, IT'S - THE BULLS HEAD, COVENTRY ROAD
Now this is a VERY old photo and I've had to take some liberties with it but can't find another picture of the place anywhere. If you look carefully you can see a cart just at the side door.  Five blokes standing around drinking and smoking, they must have always had bands there!!  Loads of people will remember lugging their gear up those two flights of stairs.  This was such a great place to play, I have really fond memories of nights here. It was always packed when we played there, probably when you played there too.
I think most good Brummy bands did gigs here so I won't do any 'naming of names' because I'll get people saying "I played there as well, add me your list".  However don't let that be a reason not to make contact here.
FOND FAREWELL
Goodby to Pete Quaife, co founder and bass player of The Kinks.  Pete had been undergoing  Kidney dialysis for some ten years, although it is not known if this was the reason for his passing.
WHATS IN A NAME?
HOORAY IT'S COMPETITION TIME AGAIN.
Liam Gallagher has announced the new name for his band - "Beady Eye".

Coincidentally, at that very moment, the Gang of Four at the pub were playing a game, which was to come up with a name for our band using only descriptive words. 'Gobby Wanker' had us in fits of laughter until 'Swaggering Twot' tipped the scales in it's favour. It would look really good on a poster too. I wonder if Liam needs a support band? doubt it though, he can definitely fill the whole stage with his own 'aura', he is the re-incarnation of John Lennon...... How do you remove 'aura' stains?

Send YOUR Entries for our Gof4 competition to "Swaggering Twot is Nothing" Bobsbullocks@GMail.com , if the Lyrics to 'Doris' (Jun blog) don't sell, they could well be on their way to 'YOU' if you win. There will be no other copies made, this is more genuine than 'Frankies Mints' or those other companies that advertise on the back of Sunday supplements. You're probably working away at your entry right now!! Just to show you how genuine I am, "Lucy pass me that piece of paper"...sound of scratchy pen.... there couldn't be fairer, I'm a man of my word.

I'd like to win them myself but competition rules mean I can't - just my luck!!

"Every Morning at the Mine you could see him arrive"....not any longer I'm afraid.  Jimmy Dean, singer and composer of  'Big Bad John' has recently passed away.
Pete Townshends guitar sells for 64,219 dollars.
A Day in the Life lyrics sell for 1.2 million dollars.
Bob's "Gis a Snog Doris" lyrics remain unsold - unbelievable!!  It's a competition prize of a lifetime.
Honest John Prescott has been made a Lord after saying for years that he would always refuse to enter THAT place.......the Gang of Four think that he's going to be known as Lord Suet Crust of Cowpieland.
HIGHLIGHT OF GLASTONBURY.  Thom Yorke and Johnny Greenwood of Radiohead playing in a small tent devoid of TV coverage. The audience and those two were 'at one with each other' during their short performance.  Great to see that ONE band who could have quite easily headlined in place of the crap Gorrilaz and got a big earner too, chose to 'Keep it Real' and give something back to their fans.  Absolutely Brilliant!!!
Still no news from anyone who was in The Executioners...surely someone must have heard of them??
Bob