YOURS IN CONFUSION?  I get quite a few e mails from people and some of them have unusual first names but you know, I just can't keep up with the bizarre names people give to their offspring these days.

Just this week I had a e-mail from a girl in Tipton, she's obviously a fan but too embarassed to write me a message, it simply said.

"Yowma!", I wonder how that name came about?

SET FASERS TO STUN......Well we got over freezing January, amazingly I didn't have to take back any presents this year. Lucy has a great heart but kept buying me clothes that make me look like a Romulan, all bleedin' shoulder pads.  She's Star Trek mad, me and the kids call her Captain Slog but despite her lack of good judgement in her Telly viewing, she's not a bad un'. So anyway, as well as it being St Valentines Day this month, it's our 37th wedding anniversary and I've planned a romantic surprise for her on a Star Trek 'theme' - "Oh Bob you're such a sentimental old thing" I hear you say. "I know...I'm like that" comes my reply.

I've been burning the midnight oil in the studio, plonking on me new Telecaster and have written her a special song that hopefully, shows the depth of my affection for her. I've plumbed the depths of my literary and physical soul to deliver something that I hope she will listen to again and again.....

It's called "I'm Gonna Beam You up the Wormhole".

OGGIE'S HOFNER SUPER SOLID 3.
A blog that dedicates itself to the sixties music would be drastically incomplete if it didn't include something about Hofner guitars.  Now I'm not gonna go on about all the models that Hofner produced, there are fabulous websites dedicated to Hofner guitars where you can browse away to your hearts content.This is the best one: http://www.vintagehofner.co.uk/ look, enjoy and drool!!

Briefly, Hofner had been making some lovely acoustic guitars for years, with the Committee being it's flagship, a beautiful piece of work.

The transition to semi-acoustic guitars with fitted pick up's soon followed. However, these models aside, I want to talk about one of their best solid body guitars, specifically, the Hofner Super Solid 3. This was the foundation guitar of practically every young group or musician that wanted to emulate Hank Marvin or the Shadows but couldn't afford a Fender. I never owned a Hofner but practically everyone else did....my reasons were economic, otherwise I would have just loved to have had one.

I recall Oggie getting his brand new Hofner Super Solid 3, 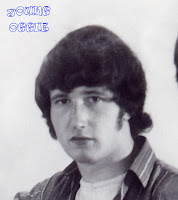 I went round to his house the day he got it and was so impressed, it was immaculate. He'd owned it for two hours and had already polished it for one hour fifty minutes. I never heard a tune out of it for eight weeks, he was a bit worried about taking the shine off the strings!

When I eventually heard the strength of the Hofner's pick-up's in comparison to my budget guitar, I realised the difference - I think it was probably the first time I began to appreciate the technical details rather than simply the aesthetics of guitars. Hofner had not only excelled in the pick up's though, the volume and tone controls were a nice modern design and placed correctly and it had the really 'cool' (I thought) pick-up selector switch located on the bottom cow horn. I could just picture myself reaching across the guitar to switch my pick-up, mid-way through a solo. "That'll impress the girls, I'll definitely get a shag tonight" - mind you I remember actually thinking that if I owned a Watkins Dominator, as I walked through a dance hall carrying it, one of the girls would think "Mmm great amp", I was a very sad young man!!

The '3' sported a Stratocaster body design of course 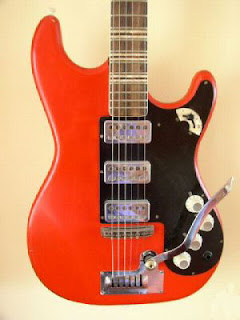 and it was 'built to last', the paint was deep and very glossy. A black scratchplate, adorned with 3 gleaming chrome pick-up's was a visual treat, particularly the red coloured variant. It looked oustanding. The neck was I recall, a little on the 'generous' side - depth-wise and was liberally embellished with pearloid inlays that stretched across the fretboard and kinda' gave it a nice 'look of the times". It was obvious that some real design thought had gone into this guitar.

You could also comfortably play up to the fifteenth fret which was amazing for what was a budget instrument. It knocked the other budget guitars sideways in its quality build and forced the other companies to do better themselves.

All of a sudden nearly all groups were using Hofners fitted with flat wound strings, connected to a Watkins copycat and a Watkins Dominator. Not only could they sound like The Shadows but had guitars that looked every bit as good to an audience who knew nothing about instruments beyond their appearance. These days people are far more informed.

The headstock too was very nice with beautiful sculpted tuners and Hofner nameplate. A substantial tremeloe arm was incorporated, which was quite firm to use, a bit Bigsby-ish I thought. From a personal standpoint, design wise, I think they could have improved the shape of the arm a little, I never understood why it was almost dagger-like with its pointed end. "You could have your eye out on that thing" I could hear me Mum saying. It would have had Jimi's eye out probably if he'd had one, he'd be biting the strings and blinding himself at the same time, 'cor' luv a duck, what a carry on that would have been. Anyway, it had a beautiful clean sound throughout the tonal range and looked stunning for it's day but, with time, music styles changed and it's sound fell out of favour like some other guitar brands.

This guitar though rightly deserves to be treasured, it represents a real milestone in popular music both in terms of its design and it's success. It bought a quality budget guitar to a huge market of would be Hanks and there were thousands of em' - in my street alone.

Sadly, Oggie doesn't have the guitar anymore but still has a 'crackin' duster' and liberal amounts of polish so, "Wax on, Wax off Oggie".

THERE GOES A PIECE OF HISTORY. PAUL LINCOLN - THE 2i's COFFEE BAR SOHO . I was chatting to my mate, The King of Skiffle, this week. He told me that sadly one of his old friends, Rock and Roll legend Paul Lincoln who had been the owner of the historic 2i's Coffee Bar in Soho, had recently passed away. We musicians and music lovers alike, all owe a small debt to him because the British Rock and Roll scene started there. Cliff Richard, Tommy Steele, Terry Dene, all the various members of The Shadows, Wee Willie Harris, Vince Eager, Billy Fury, Tony Sheridan, The Most Brothers, Adam Faith, Les Hobeaux all started in that tiny basement room and for a while Paul Lincoln managed a lot of those acts and many more after them. Most of them also worked behind the coffee bar or swept up at closing time too for about a quid a week. Co-incidentally, Brian Gregg who I interviewed in December was a member of Les Hobeaux. 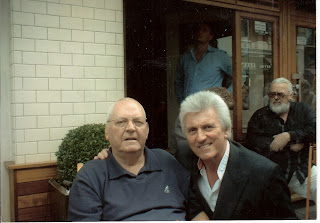 Paul Lincoln, an Australian, was a showman through and through. Not only did he own, in partnership, the 2i's but also the All-Nighter bar in Gerrard Street which was considered to be the real centre of Rock n Roll by those 'in the know'. He promoted the first RandR tours of Great Britain and was also a full time Wrestler who went under the name of Dr Death. Bizarrely for me, this was how, unknowingly I would have seen him on some of my outings to the Walford Road Wrestling shows in Sparkhill when I was a sprog.

In the mid sixties, as a musician, I visited the 2i's, as an act of homage I suppose. There was nothing special about it, no vibe really, the coffee was expensive and it was a place where people visited because of it's history. One could only imagine the scene during it's early years when it was considered the centre of British Rock and Roll, much like the Cavern in Liverpool during the Beatles emergence, The Marquee in London during the R and B period or Mothers in Birmingham - you had to have been there at the time to really feel it.  It has a significant place in British rock history though and the building where the 2i's was, now has a blue plaque on the wall noting it's existence for posterity.

Paul Lincoln was an early innovator and entrepeneur, he was loved and respected within the world of Wrestling and the coffee house'/Rock and Roll fraternity. I'm pleased I could have said something about him here, albeit a little too late.

FOOTBALL ROUND UP. It breaks my heart to say this but, congratulations to the Blues for getting to the Carling Cup Final. The mighty Villa have turned the corner and with their new sigining Darren Bent and are in the ascendency, great result on Saturday puts them (along with the Blues) into the fifth round of the FA Cup.  Meanwhile the Baggies are kind of drifting around after an amazing start to the season - what whent wrong there then?

So there you have it......Intrigue, music, classic guitars, history and a sports round up. Could a blog get any better I ask myself??

See you in March,