February 08 - Spotlight on The Uglys

A SAD VALENTINES KISS FROM BOB

Well, try as I might I can't believe that I have had such a miserable start to a year than this one. The experience of having such a chain of bad news, with the deaths of many of the people that surrounded my life for some years, Nicky James, Bugsy Eastwood, Rod Allen and the lovely Kex Gorin has been hard to take. Not all my experiences with those that have passed recently were nice ones.....but nonetheless they filled a part of my life and 'mind picture' and I can see them all now as I type this .......thanks for your company guys and many kisses to their families and friends

VALENTINES DAY - FEBRUARY 14, 1969.
Why The Uglys? well, its the Feb Blog and St Valentines Day features in their story - because it was also the date of recording of one of the most collectable records in the UK by Brumbeat heroes The Uglys.

This most talked about of groups, that danced on the edge of really making it for so many years, visited Advision Studios at 1030 pm on St Valentines night to record "I See the light" and "Mary Colinto". A one-single deal with MGM, the producer was Tony Cox who had been a member of some 'duo type' group and had just finished producing the debut album for Caravan. He had been up to Birmingham prior to that session to see the band live at The Adelphi, West Bromwich and another live gig at Rhodes Hall, just outside of London where The Ugs were supported by Amen Corner (how different things were just a few weeks later with Amen Corner riding high in the charts) -"The Uglys were a very, very tight band and both of the songs to be recorded were delivered with some real force on stage" said Cox. 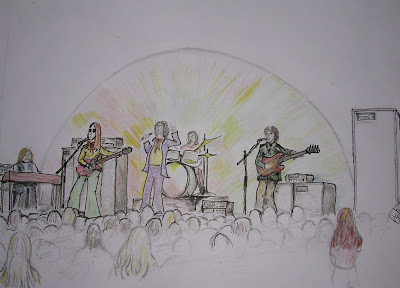 In 1969 amazingly there were only two, eight track recording desks in the whole of the UK . The Beatles had one to themselves at EMI and the other one was at Advision. The Uglys were constantly 'on the road' like some other bands at that time and had no problem in laying down a good take quickly, probably the 'take' after the engineers balance run through, which is noticeable by the energetic 'live' feel to the recording. The only extra track that was used after that first take was to record a second guitar line - one single note - to harmonise with the opening riff. Because of the luxury of having more recordable tracks to play with than ever before, more use was actually taken in the recording of Mary Colinto and was used to good effect vocally with heavy, punchy harmonies delivered agressively over a guitar rich background and insistent drumming. This was a band on top of their game. Strange then that within two months they had ceased to exist and the recording consigned to the MGM vaults somewhere with no release.

It was many years after that, in the early nineties, that the two tracks began appearing on indie labels, and were immediately picked up by the Progressive/Pyschedelic afficionados where they attracted a cult following. This following led to Sanctuary records issuing a luxuriously packaged CD of the Ugs back catalogue in 2003 "The complete Uglys". It also meant that there was a Ugs Reunion at Dave Morgans house. 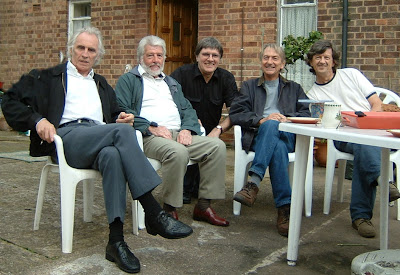 There were no master tapes of the recording available, the single being transferred to digital format at Will's studio and is that recording featured on the CD - the engineers at Sanctuary had to play around with it a bit and that lost some of its feel. Co-incidentally the recording arm of Sanctuary records has now ceased to exist so if you have a copy of the CD keep hold of it because once again it will become a rarity!!
There were only a few advance MGM labelled copies printed of the record. Tony Cox, the producer had already sold his copy on E Bay for around One Thousand Pounds. The only other known MGM copy of this single is in the hands of Will Hammond, the last guitarist of the band - in fact the last Ugly. "I actually didn't posess a copy of the MGM record but Keith Smart gave me his copy some years later, an action that he probably regrets these days" said Will with a wry smile? "Steve Gibbons has a white label acetate and Dave Morgan once had an MGM labelled copy but thinks he gave it away". So with that last guaranteed original record safely in the hands of the last Ugly he looks to have a valuable piece of history of the Brumbeat band that always features amongst the best of the best on the Brumbeat chart of top bands.

A GUITAR OF IMPORTANCE.

The DALLAS TUXEDO was the first solid body guitar available in Great Britain. I can't remember ever seeing one in the flesh, as it were, despite being as old as Methusula. I guess it wasn't too great sounding but nonetheless it deserves to be recognised as a guitar of importance. For lovers of simplicity this has it all?


Its the month of love so - look after each other, tomorrow one of you might not be here.