THE GOOD NEWS AND THE BAD NEWS

There are various street parties being held in my particular neighbourhood on receiving the fabulous news that The Spice Girls have played their last gig on their shortened world tour and have decided not to perform anymore. Whoops and Hollers are being heard everywhere...............but BAD NEWS for Nelson Mandela, great icon and world leader.........the fatuous fivesome have said that they might make an exception and sing for him at his Birthday......."What!!" he said "I thought the world loved me, I'm back off to Robin Island".


THE RETURN OF NOGA

Whilst it appears that everyone else in the UK is planning on leaving the place for foreign shores, Johnny Neal has bucked the trend and 'upped sticks' from South Africa and is in the process of re-settling back in Brum. "I'm hoping to get a residency at The Mermaid on the Stratford Road" says Noga "I was always popular with the crowd there" - house sales in the area have rocketed.

Welcome home Johnny......he'll probably take up permanent residence at St Andrews Football ground along with the other three Blues season ticket holders all complaining about the price of Bovril and Pies. 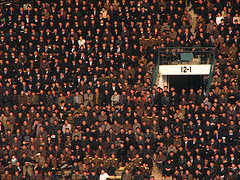 Which gives us this months competion

The winner will receive sod all.

Well, it seems that some people will do anything to play a gig these days. Bob Styler, ex-vocalist of The Yamps is in the running for the most distance travelled to do a 'one nighter'. Recently Bob hopped on a plane to Brazil to perform with a Beatles tribute band that he likes the sound of. Now thats dedication folks! 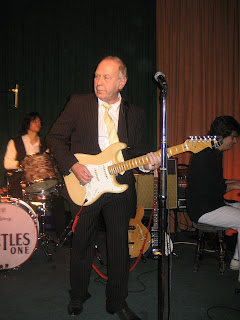 On a world political note, I was overwhelmed by the performance of Dvorak's 9 Symphony as played by the New York Philharmonic Orchestra in Pyong Yang, N Korea. OK so it's not Rock and Roll but it was played with such passion and had a lot of people in that auditorium in tears. Let's hope that it brings a new beginning to some peoples lives.

On a relative note, this piece of music produced two hit singles in the pop world in the sixties: 1. Skyline Pigeon - 'Smokey Blues Away' and 2. A piece of this symphony was incorporated in the Leonard Bernstein classic "America" by The Nice, which saw them banned from the Albert Hall for burning the American flag at the end of their performance.

Music is not just a bunch of notes.

Contributions and comments to Bobsbullocks@Gmail.com