Owdoo!
Winter approaches, time to start thinking about how miserable the festive season will be after the goverment have deprived me of some more of my assets, come the Budget later this month.   Is this the real winter of discontent?

BRUMMIES ABROAD
Thought I'd take the opportunity this month to put out messages for some people looking for old mates and to feature some more of our 'Brummies Abroad'.  Now I can't actually confirm that the next Brummie is actually living abroad because I don't know... but I know somebody who does.....
JIMMY O'NEIL
I recently wrote an article about the VOX Continental organ and in that piece mentioned the name of Jimmy O'Neil as being an organist of some standing.  In the absence of much written material about Jimmy, I think it right that I should try and give some more information about this fine Brummie musician of the sixties.  I write it in the context of Brummies Abroad, as it's believed that Jimmy lives in the States these days.   I am not in contact with him but as I had spoken with Will Hammond last month I asked him about Jimmy - they had been musical mates for years.
WH:  Jimmy O'Neil? great bloke and a brilliant musician, he was from an Irish family from the Yardley Wood area.  I think he started his musical career playing piano with the Jon Carter Image, playing the youth clubs and small dance halls scattered around Sparkhill in Brum.  I could be wrong though.
I got to meet him when I was around about 14.  I think Jimmy must have been 17 or older because he had a motorbike, a nice one too.  I had been used to talking music with friends who, like me, had grown up teaching themselves how to play but Jimmy was on another level completely, he was an accomplished, trained classical pianist.    We 'hit it off ' from the very beginning and started playing music together round at his parents home where there was a piano.  He used to come and pick me up on his motorbike and I would balance myself and my guitar on the pillion which was no mean feat with the wind hitting the guitar case.  There was always a bonus of going to his house - getting some of his Mum's Cherry Pie.
Early on, his name had been mentioned to me as someone who could play the piano 'a bit'.  I was knocked back on my heels when I actually heard him play.  His fingers used to float effortlessly, across the keys, an absolute joy to watch.  We talked for hours about music and particularly about things like, structuring discordant harmonies and the like, we both had great enthusiasm.    Sometime later we both found ourselves working at the Wholesale Food Market in the City centre, I was a junior salesman on a fruit pitch and Jimmy worked as a salesman in the Fish Market.  The working hours were 5am to 11am which suited the life of semi-pro musicians.
The VOX Continental came out and he bought one straight away.   We played together in the same group -The Yamps - for a short while, doing things like House of the Rising Sun and a load of R and B things by Jimmy Reed, Willie Dixon, Howlin Wolf and their like.  His skills as an organist were amazing and he played with loads of passion, we worked very well together.
Jimmy came by one day to say that he was going to London to join The Walker Brothers, I was flabbergasted, I wasn't bothered about him leaving the group so much, as I was excited for him.  He was a mate as well as a musical partner and I was really pleased he was joining a famous act.  I didn't see him for about a month, then one day he turned up at my house looking like a star, wearing fabulous clothes, sporting the Walker Brothers type hairstyle, driving a new red Triumph Spitfire and not smelling of Salmon!!   I was very impressed and happy for him.
The Walkers were then a four-piece outfit with Scott Walker on Bass, John on Guitar, Gary on the drums and Jimmy O'Neil on the organ.   They played one night at the Brum Cavern (or should I say the scout hut), around the time of 'Make it Easy on Yourself'  where I popped down to see him.   They were doing the normal 'Reagan double' and went from there to the Plaza Handsworth for the next show.  He told me, at that time, that the group would be using a full blown backing band and his tenure as the 'fourth Walker Brother' would shortly be coming to an end.  I hoped he'd be coming back to Birmingham to rejoin my group but he got an offer from The Ugly's which he took.  We continued to play together socially.

I joined up with The Uglys myself a little later on but was disappointed that Jimmy then switched to playing the Bass instead of the organ, and though he was a good bass player, I thought it was a real waste of great keyboard talent.   We were playing a gig at some Town Hall somewhere and there was a Bechstein grand piano on the stage, the support band were setting up their gear and various town hall employees were 'doing their thing' preparing for the night when Jim strolled across to the piano and started playing a piece by the Norwegian composer, Christian Sinding - 'The Rustle of Spring', an evocative, melodic piece - everybody just stopped doing whatever they were doing and stood 'open mouthed'.  You could have heard a pin drop, everyone burst into applause, recognising his enormous talent.  I think Jim felt embarrassed by the attention, he was more focused on the music.


In 1968 Jimmy left The Uglys, joining as the bassist for The Mindbenders, then left The Mindbenders, got married went into the antiques world, did something else then went to the States.  I haven't heard from him since 1970 when we had a brief musical encounter for a while but I was in another place at the time so it was doomed to failure.  I believe he lives in America permanently now.  I have some fond memories, I'd love to play music with him again" WH.
BRUMMIES RE-UNITED - JIMMY ALEXANDER 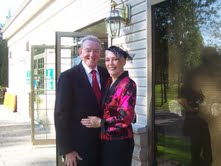 This is a call going out to find a long lost mate of Norm Crandles (Lee Stevens), another Brummie abroad, who is looking for old band mate Jimmy Alexander.  Norm makes the occasional trip back to the UK from Canada to see his beloved Aston Villa and has taken the opportunity to renew some old friendships with Johnny Neal and some of hs band.  If you are reading this Jimmy or if anyone knows of his whereabouts, an e email to the address at the bottom of the page will set the ball rolling to reunite these two old musical mates.
and whilst we're on the subject of Johnny Neal....................

Whilst other Brummies are still doing their thing across the globe, Roger 'Moon' Shaw has just returned to the midlands from his life abroad, having lived in Turkey for the last 40 years.   Roger hailed from the Great Barr area and was lead guitarist with The Zeniths and The Silhouettes before featuring in several line up's of Johnny Neals band.  From The Starliners right through to the Johnny Neal Sound.  Roger met up with some of his old band mates recently.  Johnny's band all seemed to have had nicknames and Rogers was because of his round face, like the moon.
Pictured below from left to right, Johnny 'Noga' Neal, Roger 'Moon' Shaw and 'Tiny' Tim at their recent re-union. 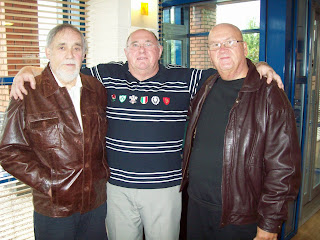 Roger, like most guitarists of the era, listened to the blues and was also influenced by Chet Atkins during his formative years.  Such was his dexterity that when Johnny Neals band backed Gene Vincent at The Carlton, Vincent himself said that he was the best 'picker' he'd heard outside of the States.

So a happy Brumbeat survivor is welcomed back into the fold.  Roger now lives in Telford, where he continues to play and has a home studio.  Anyone wishing to make contact with him should simply e mail me at the normal address.
MAKE MINE METAL
OK you metal freaks.  Remember Henry's Blues House?   If you were or still are, a Metal Head why not take a look at the 'Home of Metal' website, set up to honour Birmingham as the birthplace of that type of music.  What did we call it before "Metal' - loud, I think!!  Still in its infancy, the website is just the place to visit to swap your thoughts or contribute a memory.  Rob Horrocks is the guy to speak to.

Still no new about The Executioners....
Cheers
Bob