It appears that Birmingham City Council are pinching my ideas. After reading June's blog what did they do? They dumped 65 tons of sand in the Bull Ring and called it a beach - but now 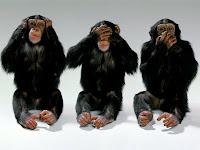 their world of 'borrowing ideas' has finally gone into whacky orbit. In their pursuit of even more gimmicky trendiness they have now come up with yet another BRAND NEW, third-hand idea. Just the opportunity to form another 'quango' led by someone who can't quite get enough expenses racked up on their 'necessary council duties' to buy their holiday home on the Costa del Fortunato!


Ladies and Gentlemen, we kindly give you - The Birmingham Walk of Fame.


Gold stars embedded in the pavement of Broad Street with the names of famous Brummies engraved into them - yahoo, I can hardly contain me'self!! We have certainly, had the great fortune to have had some of the worlds best at one time or another including, Tony Hancock for enduring blissful comedy, Alec Issigonis for designing the Mini, JRR Tolkein for some book or other!, John Wyndham (Day of the Triffids), Nigel Mansell for goo'in really fast round and round a piece of road until he was world champion at it and George Cadbury for all that chocolate. Of the above mentioned six, three lived close to my house and only one is alive but after a short conversation with him you may think otherwise....


So just where will Tolkein's star be then - Nowhere!!!.......the Council have decided that to be a famous Brummie you have to be alive. (or bizarrely you can also be a non-Brummie, foreign visitor who's just passing through the city). I find it ludicrously fascinating that people would want to spend part of their valuable time on this earth, walking through the centre of Brum just to read someones name on the pavement. Why not just get the graffiti artists to spray the names on the Job Centre walls whilst they're waiting to get their benefits? It would save a fortune and keep them occupied.

So then who will be the first awardee of this prestigious Star - Brumbeat favourite - Ozzy Osbourne - Hooray said the crowd. He will be attending the ceremony on 6 July.

This comes hot on the heels of receiving the Mojo 'Icon' award. I believe that Ozzy deserves every bit of fame and recognition he gets. It has been a long hard road since his early days with Black Sabbath at the Bear or the Arts Centre at Edgbaston and now he is one of the few celebrities who people know just by their christian name. The council have'nt said where they think it appropriate to put his star but, for me, the Hall of Memories is probably right out of the question! I thought they should put it down a white line in the centre of the pavement (it may be ironic that at the very same time Ozzy is having praise and adulation heaped on him by the Mayor whilst unveiling the said Star, a young musician is being arrested for having a bit of weed in his pocket!! ??

Other nominees include Lenny Henry - good Brummie, Frank Skinner - brilliantly funny, great Brummie, West Brom supporter and Elvis fan, Duran Duran - whose star is planned to be outside the old location of The Rum Runner where they were the resident band for some time, UB40, Robert Plant, Sir Simon Rattle and the fantabulous Julie Walters ( Macaroons Miss Babs?)- one of the greatest Brummies ever.


The organiser has said that he is also in touch with three other people, two who are from Birmingham and one from Hollywood?!! - Oopsy daisy, I almost forgot to include another 'nominee' - TV presenter Cat Deeley who is famous for being pretty! - so there we have it, pretty girl = yes, world literary genius = No. This whole commerical idea is a bit like a tabloid franchise that started off in London - the pre-condition of their particular 'Star Walk" was that you had to be a Londoner - so just where in London was Nicole Kidman born then?


This project is proposed to last for fifty years - Yes!!! FIFTY YEARS??? - with gold stars all around the City. I wonder if there is a family connection between the council and the manufacturer of gold celebrity stars?

Well if there's a chance to earn a bit of money, I'm not backwards in looking forwards and for my part I've already put in a bid to have a commercial outlet adjacent to Ozzy's star. I'm going to change my name a bit, to be more 'Ozzy freindly' that's the Politically Correct way to say sort of stealing his name but mis-spelling it to avoid street prosecution by the Trading Standards W**kers - sorry, the letters 'o' and 'r' dont appear to work on my keyboard. 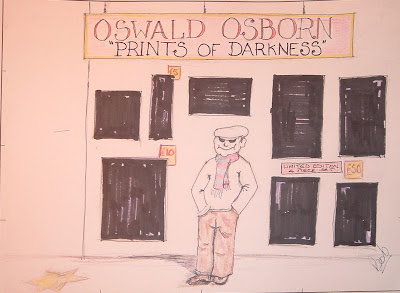 WHAT A GORGEOUS GUITAR!!

Right then, you retro freaks. 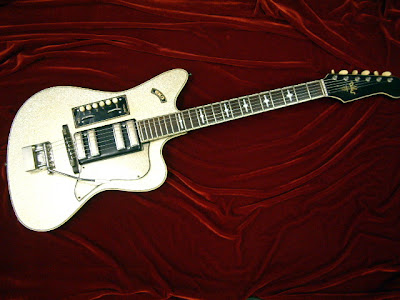 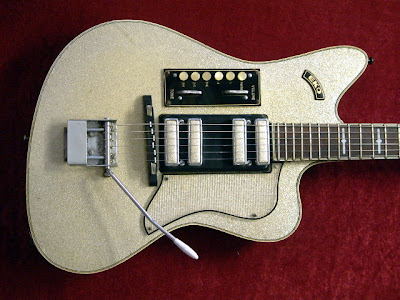 Dallas were the producers of the very first solid body guitar available in the UK. This Dallas/Eko is an Italian designed beauty that probably sounded pretty average for its time but its looks are simply stunning, with a cream silver sparkle finish to the body and nice, stylish inlays set into the fretboard. The bottom cutaway starts at the 15th fret so you could have played practically all of its 22 fret neck. Its lines are almost art deco and the body shape very reminiscent of the later Fender Jaguar/Jazzmaster range. Strangely, the headstock is marked as Dallas with the body bearing the Eko emblem. I would love to have this guitar, even if it was just to look at. My thanks to Frets Guitar Centre for the pictures. 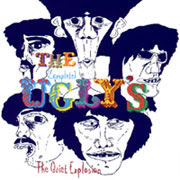 No, I dont mean girls who liked The Uglys. I read that in the recent Miss Great Britain competition, the Birmingham entrant was represented by a girl from Stoke- on-Trent because the organisers couldn't find any girls pretty enough to represent the City!! A 'spokesperson' for the Miss GB organisation said "We were desperately looking for a Miss GB entrant from Birmingham but in truth, there was no-one suitable who entered" . I am only reporting this story - Dont shoot the messenger!