CHRISTMAS SALE MADNESS!!
Aren't the Winter Sales something to look forward to? Idiots elbowing their way through the crowds of normal, everyday people like me just to get socks with 20 percent knocked off. I'm starting a 'Sales Armour' business next year and plan to have, fashion co-ordinated Cricket Boxes, Carbon Fibre Boob protecters and a wide ranging variety of 'Fetching' helmets. Can't fail?? The one thing I do like about the Sales however is, that its the only time you can see groups of women fighting with each other over a pair of cheap knickers without having to go to a porn site!

This year, I got gifts from my loved ones that I actually wanted. I think they all thought I was going to peg out when I was hospitalised so I didn't get those normal 'Dad' gifts - you know, the sort of things that I mean, knee scratchers or musical ties!! I can almost feel someone out there thinking quizzically "Hang on Bob, that's what I got this year?".

BOB PHOTOGRAPHED??
Wow!! we've had oodles of snow which naturally, not everyone likes, but seems to make Christmas that little bit more festive. My daughter and I even found time to play out in the snow blissfully unaware that the long lens, Black Country papparazzi were watching, trying to grab an opportunity to expose my identity. Fortunately I was wearing my 'shades man'. The following photographs however appeared in the Sedgetree Gazette.... 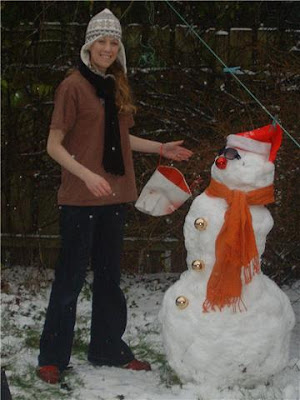 This was taken following Christmas dinner, Skippy attends me with sick bag at the ready.
The Gazette also must have been at work with the airbrush, removing my glasses, because they released the following close-up photograph.. skin colour correct, dripping red nose correct, my eyes however are a romantic shade of hazel - phew identity intact..... 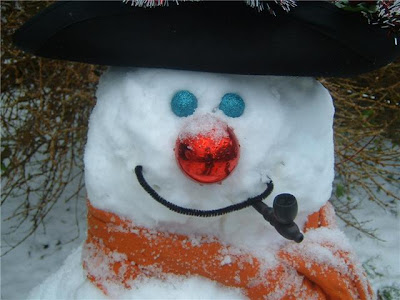 BUDDY HOLLY MUST HAVE INVENTED FEEDBACK!!

In the early Fifties Rock music started to rear its ugly head above the parapet of decency and moral correctness. Its hard to believe, these days, that something so innocent could have caused such a commotion and indignation to some people. Below is a Buddy Holly review that I stumbled upon whilst meandering through the cyber world of Rock oddities - this is not made up by me (like the rest of my inane ramblings). The Gang of Four at the pub were in tears when I read them this:

"Artistry has been kicked out of the stage door and performers who can provide ephemeral thrills are taking its place. Audiences are in search of the momentary gimmick, of which they tire whenever another novelty is introduced. At least it would seem so (writes Peter Holdsworth) from the fanatical reception given to a screeching guitar player and his two colleagues when they headed the bill at Bradford last night. They were American Buddy Holly and the Crickets. Unless they had previously read the lyrics or heard them sung by an articulate vocalist, I would have defied anyone in the audience to tell me what 70 per cent of the words which issued from the lips of this foot-stamping, knee falling musician. Where on earth is show business heading? The tragedy often is that many of the performers, like the trio last night, have a basic talent which they distort in order to win an audience's favour. On an elaborate display board at the Gaumont announcing a forthcoming musical contest, is fixed a washboard. What a pitiful symbol it is of present-day entertainment. Like its worshippers, it would be better employed in the dolly-tub!"

OK, you folks. I would like to say many thanks to all those who have sent me their Christmas and New Year greetings and in return, here's wishing you all a prosperous, warm and peaceful New Year and "Tune in again next month folks for more hilarious, rip roaring, side splitting humour from your man on the street"