It would appear that I have upset some people around the world by not including them in my salutations from the opening paragraph of the last blog.  So as well as the other countries I mentioned already, I would like to say "hello maties" to New Zealand, Finland, Spain, France, Russia and Ukraine (Zdravstvuyte druz'ya), and lastly Argentina...Hola! 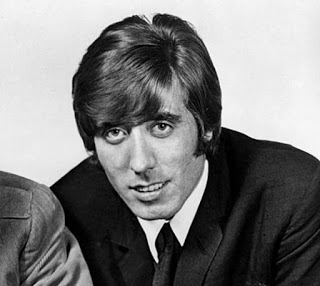 A couple of months back I did a piece on a chance discovery by a friend, of a CD copy of Moody Blues R&B powerhouse bassist, Clint Walker's biography,"My Life, The Waltz", written under his real name of Albert Eccles. I asked if anyone could give it a good home and I would try to pass it on.

So I'm pleased to say that my recent contact with Argentina was through an email from Joaquin Jovier, a fan of the blog, The Moody Blues and Brumbeat saying he has a collection of memorabilia and was in contact by email with Clint shortly before Clint's death... but never managed to get a copy of the autobiography.  He asked if I could send him a copy of the CD.

BOB'S TO THE RESCUE
JOAQUIN..WHERE ARE YOU?
I am not the owner of the disc in question and I don't want to get into into sending copies of anything out but 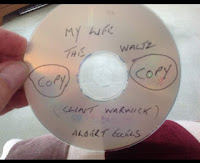 have contacted Bob Styler, all round good guy and Brumbeat musician who is currently performing with The Transporters, who has the disc and he has very kindly sent it to me to pass on to you.

However, Joaquin, I have tried replying to your email but it appears that your email address doesn't accept replies so please try again with an address I can post this off to.

I'm so pleased that this will be going to a fan of probably the best R&B group that came out of Birmingham in the 60's alongside The Spencer Davies Group. We were blessed in the Gritty City with hard music and soulful singers like Denny Laine and Steve Winwood who were just head and shoulders above the other vocalists of the day.  It was a fantastic music environment, bands in every pub and success waiting on every doorstep....or so we all thought.

More on that in the next blog maybe.
HARLEY BENTON 12 STRING
I bought myself a Christmas gift back in October, the incredibly affordable 12 string electric guitar from Harley Benton but, as it was for Christmas, I left it in its box unplayed till Christmas day.

market a couple of years back and no-one really took much notice of them, including me, after all its just a budget guitar for starters right?    Not quite, is my answer to that.   In certain cases they are more "creators of opportunity" for those who don't have thousands of pounds to spend.  In my case I wanted to own and play, if only for a couple of songs, an electric 12 String but other options start from around 450 up to 5000 pounds and I didn't feel comfortable with paying a lot for it but naturally wanted some quality for my money to boot!  My eyes first alighted on this particular Harley Benton whilst surfing the net one day and when I saw the price of 200 pounds I thought it was a misprint or probably the guitar would be unplayable and you got what you paid for.
However, I thought it was worth taking a gamble to buy this budget 12 string because after all, if it was no good for the stage I could use it just for recording purposes
where the distinctive sound of an electric 12 string was needed.

I was mega pleased when I first opened the guitar box (which was not packed particularly well I have to add) because the guitar itself was immediately pleasing to the eye.  There is no hiding the fact that it looks very much like a Rickenbacker, a hollow body guitar, very light and although the headstock appears gigantic, in comparison to the small body, my fears of it being a "neck diver" were quickly diminished.   It is nicely balanced, has a neck action that was really beyond my expectations and was in tune and playable directly out of the box.   The overall finish was impressive with nice bindings around the body and the F sound hole too.  I played a solid Fender 12 string a couple of times in the 60's and this felt just the same.  This has a wider neck that a Ricky, thank goodness. 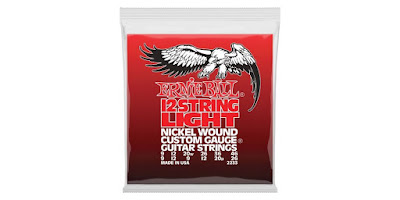 I had been prepared to be disappointed with making a cheap choice but found myself breaking into a nice smile as I started playing it.   The pick ups are good
and there is a reasonable tonal range from the tone pots themselves.   It doesn't have the exact Ricky Ring to it but enough to fulfil all my needs.  I shall be changing the cheap strings but nothing more.

It did have a couple of tiny cosmetic blemishes but none that make any difference.  One particular cosmetic deficiency is that, if you look inside the F hole you can see traces of the varnish spray inside the guitar body, this recognised blemish features in most of the on line reviews so maybe in the future, if it becomes a trendy guitar one day, it will be a sign of authenticity.....stranger things have happened at sea!!

WOULD I BUY A HARLEY BENTON AGAIN?
I don't have an answer to that because my precise need was catered for by this guitar which happened to be massive value for money, and it's a far better choice than buying direct from China, even though these guitars are made there, they are under licence to Thomann so at least there is some level of product control.   I wouldn't have looked at this brand of guitar to buy a principal instrument for stage use I have to say, but neither would I have looked for an Epiphone or a Squier Affinity.  I'm not "dissing" the brands, it's personal choice but it's really the beginners market that HB are at right now, however, they are producing better instruments further up the price range but essentially giving the beginners a good product for the price and that can't be bad can it?  They are the 60's Watkins Rapier of the day.

I think I have got a great deal for little money, the guitar does what it says for next to nothing in real terms.   So if you are a Beatles fan you could get so much enjoyment from duplicating the George Harrison sound without breaking the bank.   If you were willing to pay the extra Four Thousand Pounds to get a real Ricky I doubt you would be able to distinguish a big difference in a live band setting between the two guitars so you could protect your bank account and have some fun at the same time.

Now then The Byrds, "All I really Wanna Do".....
My mate said that playing a 12 string was the quickest way to empty a room!
another said "I bet you play "Stairway" in secret......Not a Chance!

VALENTINES DAY OK Its Valentine Day this month and being an old romantic I am taking Mrs Bob for a 46th wedding anniversary ROCK weekend break to Gibraltar!, "Oh you old softie Bob"....not really, its a lot cheaper than buying concert tickets these days.   I thought it would be interesting to be there on BREXIT Day.   So if you are reading this on publishing day, I will be "Your Brummie at the BREXIT Front".

Hi Bob, I'm Pedro Joaquin Jover, I love your blog, love all of the Birmingham music scene. Some time ago I managed a blog along to my friend Jorge Devincenzi about ELO, called "Secret Messages from Argentina" later became in "ELOZoom", we made many friends like Bev Bevan, Kelly Groucutt, Dave Scott-Morgan, Gerry Levene († 2011), Jim Onslow and Steve Maher (sadly passed away) from Tinkerbell's Fairydust band, thanks to Steve, we learned about Tinkerbell's connection with Jeff Lynne and their song "Follow Me Follow", pre Idle Race era. Many of these friends today are on our facebook account.
I also managed a fanpage about "The Moody Blues" and it was there that I contacted to Clint Warwick, just when he released his album.
Soon after, Pamela Phelan sadly informed me that Clint had passed away.
Currently we only manage a fanpage on facebook about ELO and related bands from Birmingham.
Very grateful for your response and your search on Clint's posthumous album, it has been a great honor for me.
Our warmest hug from a distance from Argentina and best wishes to you.