Ding-Dong the Christmas spirit is upon us and I LOVE IT !!!! 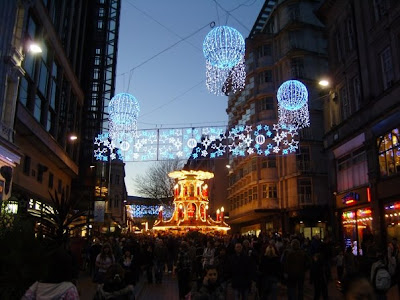 BRIAN GREGG 'IN THE SNUG' WITH BULLS HEAD BOB.
THE WRITING AND RECORDING SESSION OF
- SHAKIN' - ALL - OVER

Brian Gregg is an icon in the world of Beat Music and I was more than pleased to have a chin-wag with him about the recording of the BEST beat song ever written.   He's a fabulous guy.......   Geographically speaking, Shakin' All Over is outside of our bailywick but in musical terms, we Brummies shared and relished the massive impact of it's heritage.  Every night in every bar, and probably twice a night -  this song was played by every Brummie Beat group - guaranteed.     A record and recording that stands as a model of what a great band should sound like and it's impact affected every red blooded musician from it's first release in 1960 to the present day.  I just know that some young band, probably at this very moment, have just discovered Shakin' All Over and are thrashing it out in a garage.

ANSWERED!! ....
THE GREAT RIDDLE OF WHICH GUITARIST PLAYED WHAT....JOE MORETTI, MICK GREEN, ALAN CADDY - IS BROUGHT TO LIGHT AND LAID TO REST.

CHRISTMAS AT THE CARLTON
If you were a popular Brummie band during the 60's your Christmas Gig List would have been full to bursting for a couple of months already.  If you were 'canny' though you always held New Years Eve open for a bit longer,  to get a better price, and could normally play a 'double' that night.  These days you would be lucky if you got two gigs for the whole of the month.

One Christmas, maybe 67', New Years Eve to be precise, we played at The Bulls Head, finished there at 10.00 - I think the Idle Race were on then up till midnight, I'm not sure - we then drove over to The Carlton to play up to midnight there and then straight on to the Elbow Room to play till 2.AM.   Every gig at The Bulls Head was great, but playing to a jam packed house with everyone in party spirits on New Years Eve was extra special, even the bouncers smiled, or maybe it could have been some wind!  They always seemed to grimace at me, I think they could sense my fear!!    It proved a little difficult to leave the place though, with several high spirited girls demanding New Years kisses before we left - naturally the part that all musicians had to suffer!!  I always felt exploited....suffering at the hands of women.


On arrival at The Carlton we made for the entrance whilst the roadie did his thing, carting 4 x 12 cabinets up those metal stairs at the side, it must have been back breaking, particularly having just humped it all up and down the stairs at the Bull.  We went through the front into the downstairs foyer where Phil Myatt was holding court and and there was much 'Happy New Year-ing' between us all.
The Way of Life were playing on stage as we arrived.  Apart from the Jones brothers I'm not quite sure who else was in the line up at that time but they were a fine band.   As you walked up the stairs the sound of the band got louder and louder, then it hit you full in the face as you cleared the top stair. 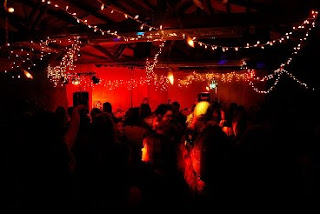 There was always a good atmosphere at The Carlton and on New Years Eve the place was HEAVING, the air was a blue haze of cigarette smoke, the smell of perfume and beer pervading everything.   The heat that night, inside the venue was incredible, all those hot bodies leaping around and the stage lights contributing their own share of therms.  We headed into the bar area and spent some time chatting to the group of girls who always followed us around and bought us christmas gifts.  They were great and loyal fans.

Having warmed up at The Bull, we were 'up for it' that night and had a really good time on stage getting the crowd going, it was twice as hot upon the stage as it was down on the dance floor.  We played our set and did the 'Midnight Countdown' thing then finished. We were all soaked to the skin with sweat - with still one more gig to go.  The roadie meanwhile, was humping the kit back down the two flights of steel stairs.

We arrived at The Elbow Room in that sweaty condition too, but now physically drained, after the 'sauna' at The Carlton.  The Elbow Room was always good to play at though, with some 'groovy' clientele.

We must have looked like drowned rats and smelled like drains as we entered, but we joined in the ongoing fun whilst the roadie humped our kit up yet another couple of flights of stairs.  He was a real hero and all round good guy, not with us any longer I'm sorry to say.  After the last gig of the night, we 'wound down', partied and left our gear there to be picked up the day after.   We must have paid him a good bonus for that night.  A triple was never a recommended thing to take on but on New Years Eve was always worth the money.
I'm sure this scenario will bring back memories for some of you guys who went through the same sort of thing at exactly those places and I know that if you close your eyes you can definitely picture it, almost hear it but thankfully not smell it!!.....Christmas at The Carlton, Happy Days when Live Music was King.  (For you download freaks, the photo used in NOT the interior of The Carlton - sorry)

HAS MACCA GONE MAD???
Paul McCartney seems to have spent his life fighting for equal recognition with John Lennon - criticised wrongly, in my opinion as a 'lightweight'.   I believe that he was the greatest driving influence in The Beatles, aside from his awesome output of songs.  It was he who had the project ideas, he wrote and played some of the best remembered guitar solo's - ie. Taxman - he was by far, the best bass player on the planet and he also wrote some thundering rockers.   I have always been and will always be influenced by him musically.
But why is it he seems to lose the plot completely?  When he does that, he falls right into the hands of his worst critics.

He doesn't need any more money.  He is a hero of rock music beyond comparison and  I'm elated that he spends the time touring.  The Beatles were the most innovative and creative bands of all time who struggled for years to become a great little R&B group, as every other band in the UK did - only the strong survived.   He doesn't need any publicity either, everybody knows who he is.

So what the heck is he doing kow-towing to juvenile Corporate Music show - X Factor!!  It is this very show that has been the downfall of independent music, it's packaged tripe - week after week, playing to the Grannies and tinytots.   So it's surprising that he would come out with a gaff like:   "Its a tribute that The Beatles are having their songs sung by the X Factor contestants" - WAKE UP!!! MACCA, for F***'* sake....it's people like these who think, and state, that The Beatles were a fabricated boy band!  Now I don't watch the show personally, but I have read some stuff in the newspapers that suggests 'One Direction" a boy band on the show are the New Beatles. I don't have to watch the show to know that it's all..... BOLLOCKS!!, what a pile of crap.

He's done it because of the business deal that will have the songs on the show available on i Tunes but the question is?

Where's his sense of pride and self respect?
Can't he see how vulgar these actions are when people are being thrown out of their homes through poverty?   Paul, you don't need any more money....give it a rest man.  A Working Class hero??
A Happy Christmas to him anyway.

A CHRISTMAS GREETING.
I would sincerely like to wish all the Brumbeat surviviors and the blog readers a truly Happy Christmas, these are uncertain days with the crisis and cuts in full swing.   Nonetheless, this is a time for us all to reflect and appreciate the things that we have, and have had in our past.  Be good to each other.

Wishing a speedy recovery and kisses to Maggie Crandles and a Christrmas 'Thankyou' to Judy Adkins for her patience.

I would further like to send a special greeting to any of you who have family members in the UK Forces serving on operational duties.   It is hard enough being parted from those who are dear to us at any time, but doubly so at the festive season.   A very special Happy Christmas to the guys in Selly Oak too.

Thanks for your e-mails of support concerning some Brummie traitors I mentioned.

AND FINALLY.....OGGIE'S CARD
OK, Here's Oggies Christmas Card, he's in California this festive season.  Last year I published a photo of scantily dressed females.  I have learned my lesson and decided that it was exploitation to ask girls to pose with just a pair of pants on........ 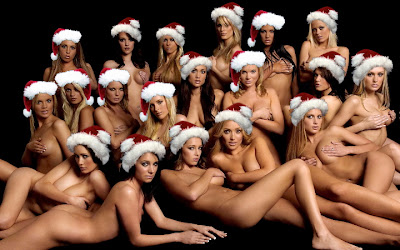 Hi Bob the gig at the Carlton with "The way of Life " at that time (pre Mothers) the line up would have been Reg Jones vocals, Chris Jones guitar/vocals, Barry Smith drums/vocals, Melvin bass. Cheers , Great Blog .
Baz Smith (Baz St Leger)