Hiya Brummies and friends around the globe,
Howya gooin?

This very day, you find me showing my extremes...not in the testicular area I hasten to add, that would just cause pandemonium.  It's more anger, at the feeling of being socially and geographically snubbed by a bunch of W*****'S.    But don't let me prejudge anyone....read on and make your own mind up who the W*****'S are.   thats how serious I am today!

On the other hand... you will findWARMTH and respect oozing out of every pore.
Now, I'm known locally as 'Joe Placid' but here we go....I might as well start with the angry bit -

SOMETIMES WE DISAGREE.....TRAITORS
The office at BRUMBEAT Towers has been a hot bed of disagreement over the last month.
John is the type of guy who doesn't like to ruffle anyone's feathers too much because he's such a nice man, however, on my side of the office indignation rules and the word of the humble Brummy speaks out.
Whilst I seethe with rage, he guardedly keeps his thoughts to himself.   Why do I seethe?  Well, it's because he gave publicity to that group of brummie musicians and their promoter Brian Yeates on last month's Pie Stand Page, who think that "referring to themselves as being from Birmingham, is a hindrance to them"!!  Johns editorial response was ("It should really enhance the appeal in my opinion! JRW"). That was John at his angriest.

I don't even want to mention their names, because to do so would give them more publicity, although I'm guilty of doing that very thing now.   I would have binned the whole thing and saved us the embarrasment of having been associated with a show that's ashamed of admitting they're from Birmingham.
Needless to say the Gang of Four at the boozer are ****ing fuming.   Nobber launched himself into 'abuse mode' with an assortment of conjoined swearwords I'd never heard before, but all of them ended in -ers!

I now give you the lowdown on a recent result of a vote from 'A selected voice' of the inhabitants of Aston who were in the pub at the time.... "Mon dieu, Gerard" -UTV.


RESULTS FROM QUESTIONAIRE, HELD AT A 'MEETING' OF THE BROTHERHOOD OF BRUMMIES AND INVITED GUESTS FROM THE SISTERHOOD 'ON DEFINITELY AN EQUAL FOOTING'  OF BRUMMIE-ESSES OR "BRUMS", DEPENDING ON YOUR ASPECT. - 38 ATTENDING.
(Quantity of 'gender blend' will be supplied if requested but will be resisted by certain elements of the brotherhood/sisterhood (or vice versa) of the 'fra/materinity' if certain issues arise pertaining to a percieved derogatory word or insinuation OR insult by any party in the world whatsoever, and their Mum.) dum de dum de dum......

If there is an 'up' side to this sorry tale, then it's because I am pleased to see that at least Gibbo isn't a part of this.  It's probably just the same material served up under a different name anyway, so if you saw Brum Rocked, or The Move or Bev Bevans 'Move' or any of those other permutations of the same group of people, I imagine there'll be nothing new apart from a bit of Froggy's stuff.  Go and see them if you want, but be careful not to speak, they probably won't understand your accent....  I imagine GT thought he wouldn't be having a pie in the face any longer? - welcome back.
Perhaps Roy Wood was right when he talked in such a derogatory manner about the Move reformation..... flogging a dead horse.

A TRUE BRUMBEAT HERO!!
Now for every low point there is a High.   Ladies and Gentleman, here is a real hero, who has done masses to promote Birmingham, is proud of his heritage and asks for nothing in exchange.  I also know that he would quake at the thought of anyone writing anything about him.  Particularly me. 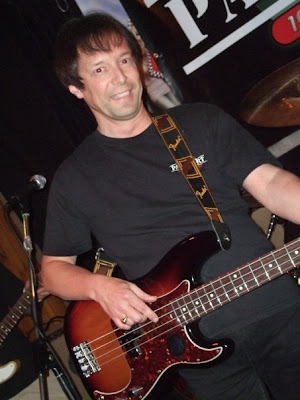 JOHN R WOODHOUSE
Just because he doesn't seek any publicity, doesn't mean that he isn't going to get any - not as long as I'm around that is!

Ten years ago, bassist John Woodhouse, was thinking of a little hobby to entertain himself with.  He remembered some stories his uncle had told him about the days of being a musician during the 60's in Birmingham, the incessant sound of beat groups and Chuck Berry rhythms, the gigs, the night clubs and band hangouts.  John was already a fan of the music from the West Midlands and has a great record and CD collection of all the bands.  He thought that he could create a personal website about that subject.  Little did he know, or envisage that 10 years after, the website would be such a huge success.  From early beginnings, people started contacting him with details and accounts about groups they had played with, a small trickle soon became more of a constant flow.    A lot of stories were passed on, often contradicting each other but this is hardly surprising, as all the events had taken place 40 years prior to the website being launched.

As time passed and information grew, some clarity began to emerge and group biographies were amended to amplify or remove some stories that were "Imaginative" and in a couple of cases clearly fabrications - Elvis never played with a band from Small Heath!!
﻿﻿
﻿There are now a massive amount of biographies archived on the site and although John receives some biog's sent in written form, they all need to be edited to fit the BRUMBEAT bio format, checked for inaccuracies and then re-written in his own inimitable style.  When I say that written bio's were sent in, they mostly consist of  "I played with this group, then this one and then the other" and from this undetailed information John has written full pages of relevant information about the bands activities and line-up changes.  The construction of these bio's are really time consuming affairs and can be made even more difficult in some groups cases, as the line-up changes were on a weekly basis.   The whole concept of this small army of Brummie musicians swapping groups and changing names was incredibly complex and in some cases unfathomable.  I know of one bass player who could have had a hundred notches on his guitar to indicate how many bands he had been in.  Of course John doesn't just write biographies, he has conducted reviews and interviews with a host of names from Birminghams illustrious musical past.

What does he get out of it?...in financial terms nothing.  BRUMBEAT is a 'not for profit' website run by someone with imagination and a resolute determination to map the years when Birmingham throbbed with the sound of a group in every bar, pub or dance hall during the years that saw unparallelled changes in society, fashion and the arts in general.

Only those who lived through those days can truly know what a mind blowing experience it all was, at its climax.   Without a person like John, that experience, starting from the very start of the Group phase would never have been passed on and this archive would never exist.  As such, his contribution to the preservation of a generation of Brummie musicians is incalculable.  This website has aided the most familiar glossy music magazines with research into their stories and has assisted record companies with information and helped them to gain contact with group members, more often than not without any form of acknowledgement at all.

John has another tremendous asset.  He is a good, enthusiastic musician who likes to play rock n roll and plays with a couple of bands, the main one being PASSPORT.  He has had a load of gigs and has rewarded himself with a new Fender Jazz Bass.    Just where he finds the time to hold down his job, look after his family obligations, fulfill his commitments to the bands AND write stuff for the website is really something to be admired. 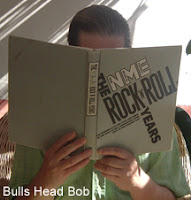 About 5 years ago, I suggested that we pool our resources, promising that "We wouldn't regret it". Well we have had some opposite views at Brumbeat Towers but mostly we are of the same mind and its great to work together, we just approach things from different angles.  The folk who were a part of the BRUMBEAT scene are becoming fewer and each time that happens, it only elevates the importance of the work undertaken by one of the nicest men about and I personally thank John for his dedication.

Ten years is a long, long time and I know for a fact that I speak for all the musicians and anyone else with any form of connection to the BRUMBEAT era, when I say thanks and rightly applaud him for keeping those days, the spirit and the history alive.

I give you
John Woodhouse,
BRUMBEAT Hero.
Happy 10th Anniversary
THE BIRMINGHAM WALK OF FAME
I believe that the Birmingham City Council should take note of John's achievements and think positively about Birmingham's Broad Street, 'Walk of Fame' star allocations.  I would certainly like them to give great thought to giving John Woodhouse or even simply BRUMBEAT some just recognition for 10 years of unpaid and incredibly important service to the history of Birmingham's music scene - in the years when it was proclaimed that the sound coming out of the West Midlands was called
BRUMBEAT!!!
Here's to another 10 years....
COMING TO YOUR COMPUTER SCREEN IN DECEMBER
Bulls Head Bob's Christmas Bonus to all the BRUMBEAT readers.  Fantastic "In the Snug"  interview with BRIAN GREGG, Bassist for Johhny Kidd and The Pirates.   The story and "The Recording Session of  'SHAKIN' ALL OVER' - amazing stuff!!  Exclusive to BULLS HEAD BOB and BRUMBEAT, the worlds greatest BRUMMIE partnership - and proud of it!!
Bob
copyright:  Bullsheadbob
contact:     Bobsbullocks@Gmail.com
Posted by Bulls Head Bob at 06:00

Pretty good to read about the office at BRUMBEAT Towers and about the result is also good to know.