Hello Brummies,
Well after the snow and the freezing temperatures of April, I am beginning to wonder about the truths of global warming. My 83 year old neighbour, Elsie Gussett, says that she can't remember a colder April except for the ones in 1983, 1976, 1963, 1952, 1948,1947 and all of those during the war years? She also says that under no circumstances will SHE be carrying the olympic torch, if asked, until China frees Tibbles, a cat she owned which disappeared after the opening of a nearby Chinese Take Away! Furthermore she states she has been Pink all her life and doesn't want to be Green like most people do these days and neither does her friend Betty.

BOB INVESTIGATES: THE MUSIC EXCHANGE
SHADES OF CHERRY STREET
To all the muso's of Birmingham's 60's and 70's, Cherry Street will be forever embedded in their memories as the location of Kay Westworths music shop. This tiny little place in the centre of the city was the friendliest of music shops. They had only a small selection of instruments for sale but the ambience was unequalled, it was the sort of place that you could hang around all day just chatting and it was practically guaranteed that whilst there one of your mates would drop in for a chinwag or to swap a few guitar phrases. "That sort of music shop only existed in the past" I said to Nobby, my "Moaning over a pint, companion"..."All the music shops in Brum nowadays are impersonal and only after your money"......."I know one thats not" he said. If you are the sort of person who loves music and want to meet other musicians, there is a tiny nook of civilised and welcoming muso heaven in Stirchley where you can even get a free coffee!!! "Thats Bollocks" came my tart reply. Time for Bob to Investigate:........ 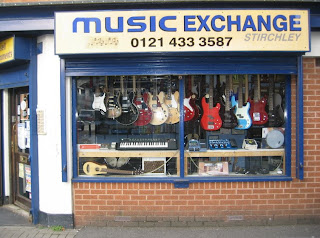 I tentatively entered The Music Exchange on the Pershore Road expecting that look you get from shop staff like your'e a prospective thief. I was immediately put off guard when someone smiled and said "Hello..........Blimey its Bob!!, hello Mate, would you like a cup of coffee" - not only was my cover blown straight away but Nobby was right, there are friendly people left in the world AND who give you free coffee. The shop is smallish, but has lots of guitars and amps, some vintage models too. "Thats nice" I said pointing to a rare old thing, "Have a play if you want to, I'll plug in an amp". Well it certainly seems to have that same vibe as Kay Westworths. I probed the staff (not in a physical sense you understand) and discovered that Steve, the shop owner has a long history of guitaristry stretching back to the 70's and his sidekick is none other than 60's Brumbeat hero Bob Styler, vocalist for groups like The Yamps, The Fashion and Traction and who, nowadays, is also a guitarist. We chatted away about old gigs, vans, girls, guitars, stroppy ego's, robbing agents, shitty managers, hair loss, no money - you know, that general chit chat that muso's lapse into immediately upon meeting. The shop has a lovely feel to it, like a comfortable old jumper.

This is one of the last independent music shops left in Brum where no-one is looked down on and where starters can rub shoulders with experienced musicians in Brum who also like the ambience of the place and pop in for picks and strings etc. The staff are great and are not short of music experience, giving advice to those that want to learn the rocky road of how to be a musician. For my money the Music Exchange deserves the 'Bulls Head Bob Seal of Approval' and I urge you all to go there and support this friendly shop. I asked Bob Styler what he liked so much about working there "I just love it when guitarists come here and play Hotel California or Stairway to Heaven repeatedly!!?????????? - Music hasn't dulled that guy's sense of humour.

Bob.
P.S. (I have since, managed to get Bob Styler to send me some yet unpublished photos of The Yamps and the original line up of Traction which are now on the relevant Groups' bio pages).

PUTTING YOUR MONEY WHERE YOUR MOUTH IS. We, here at the lavish suite of Brumbeat offices, like to think that we are not just the sort of people who talk about music without having had the experience. 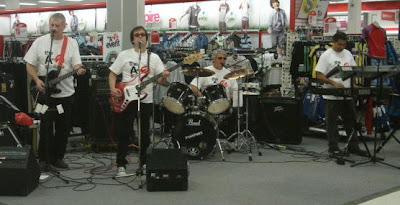 To prove this point the above photo shows Brumbeat Editor, John Woodhouse (second from left) with his band PASSPORT during a recent promotional gig at an undisclosed location. Taking in to the streets John!! and Keeping music Live.