Sad news indeed that old acquaintance Melvin Stanton (The Chucks/Way of Life) recently passed away. Melvin was a stalwart of the Brumbeat scene. Goodbye old friend. My condolences also go out to his family and to all those that knew him.

A BAD MONTH FOR THE BEATLES
NORMAN SMITH - R.I.P. 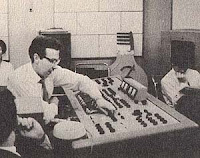 Not a Brummie, but certainly for my money, one of the people who were on the 'A' list of "most important" in the formation of British recorded music from the sixties onwards. An employee of EMI, Norman (called 'Normal Norman" by John Lennon) was the Beatles Recording Engineer and as such was responsible for developing all those incredible recorded sounds. He worked with the Fabs up to and including Rubber Soul which according to George Harrison was one of the best two LP's they ever made (the other being Revolver). I can't imagine the pressure that he was put under to produce the goods but practically every Brummie muso was brought up listening to the results of his efforts for indeed there haven't been many since who could reproduce those beautiful recordings on a 4 track machine. He was later responsible for the signing to EMI of Pink Floyd.

He later had a couple of hits on his own as "Hurricane Smith", the most well known of the two being "Dont Let it Die".

Erstwhile school friend,roadie, companion, close friend, confidant of the Beatles and later becoming the manager of Apple. He was also the man who got the band to do their Anthology which is another reason for us all to be grateful for his existence. Paul McCartney and Ringo Starr now seem to be isolated from those that were genuinely close to them and moreover, a person that could be trusted. I am sure they are both in real grief over his passing.

Rumours abound that Oh-No! (once referred to by Ringo as Widow Twanky) is about to take Heather Mills to court for stealing her crown as the country's most hated woman. "What does vilified mean, ya nah" said the Geordie bank robber who has stated that she will be giving a lot of her recently acquired money to charity, the main beneficiary being The Heather Mills Gold Prospecting Co Ltd"