I know its the first of April but want you to know that everything in this blog is true.  A FREE fender bass AND a SHOCKING photo of Mrs Bob.

Well last month on TV we were treated to a display of spite, dreadful acting, sulking,  untruths and twisted facts from an American and a puppy, woof woof!  However it proved to be nothing more than an unwanted, unimportant display of greed and self importance a diversion from my daily trudge through life, constantly depressed because I don't live in a mansion, I'm not a Prince, I'll never be a millionaire because I'm a musician and a pensioner and I don't have slaves to bully who fail to attend to my every unreasonable whim.   I'm glad my life isn't as tough as theirs, fancy not knowing where the next million will come from?  I approached the media with my story of a disadvantaged life but strangely there was no interest, not even from FOX news.

The most popular bass guitar ever made, it is pure class and its' deep tri-colour Sunburst finish is achieved, in part I'm told, by being caressed for 24 hours by a smokey eyed, dusky maiden from foreign shores.   Whether the latter part of that is true, could just be another myth attributed to the intrigue of this magnificent guitar. 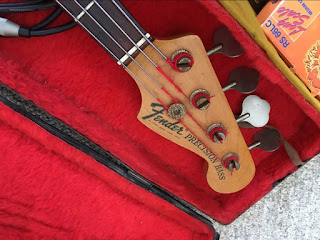 A lot of bassists insist on that vintage sound available from pre CBS models of this iconic instrument, so much so, that they are willing to lay out around £3000 for one, so it would be a dream to get a free one wouldn't it? Just a dream.

That dream came true for John Woodhouse though, editor of BRUMBEAT.net, the very person who permits me to lodge myself in his 'cupboard of convenience' for the blog at the world famous Brumbeat Towers. 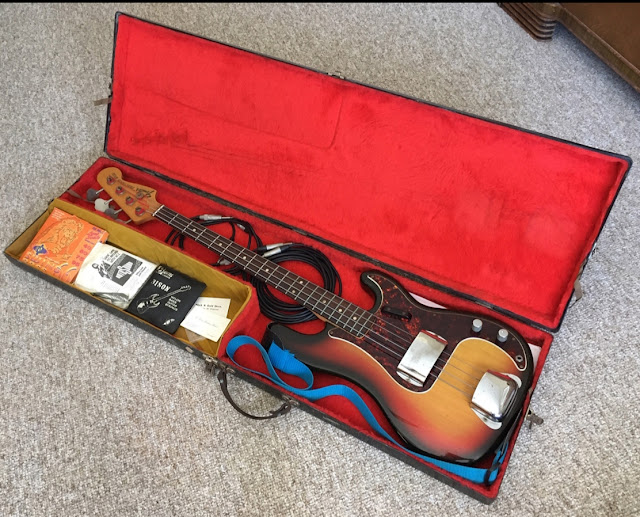 of a 71 Fender Precision bass from an old friend of the family, a certain "Mr Rex"......a former jazz and social cabaret band player for many years around the clubs, and around the world.   For many of those years he had played a double bass so the Fender hadn't been slung around the stage by some drunken rocker or in fact, left the shores of the UK. It had spent a lot of time in its original case and the above picture is how John opened the case all neatly organised with Burns Bison strings and set lists, clubland cards with booking agents phone numbers.  A real treasure chest of provenance and we all know that.......

These days, the second hand market for guitars is full of copies of classic guitars and having proof of authenticity is everything and it's not just a receipt that counts.  Like us humans, old guitars develop characteristics of their past life.  Buckle rash on the back, cracks in the varnish, pitting of the chromeware where sweat has got into the scratches and formed little spots of oxidation, not pretty but pretty unfakeable. 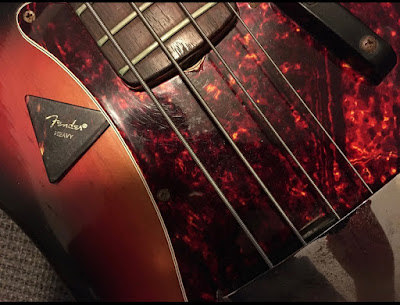 John said, "What struck me was that unmistakeable musty smell when I first opened the case" (then he gets a little more bass player-ish)........" I sniffed the scratchplate, and it had the right smell, you know? Age and authenticity past gigs, stale beer and cigarette smoke".

One can see the beauty of this guitar in it's original condition, original case, nothing swapped out, just as it was made and has paid its dues and taken some light knocks. However, no matter how beautiful, I might not have given it the scratchplate sniff test but then again, I'm not a bass player? 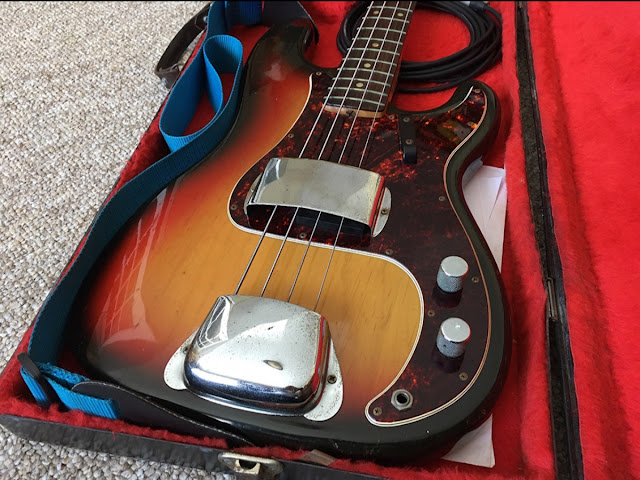 And here it is, a thing of beauty, with it's new owner, the very lovely and very lucky John Woodhouse, we all owe him a debt of gratitude for the time and effort he put into the greatest Web Site for bands of the West Midlands of the 60's.  BRUMBEAT.NET. 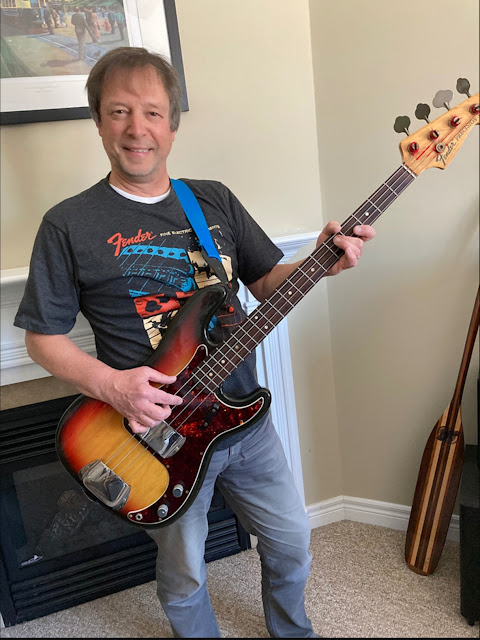 He says he's not even going to change the strings. That's a nice thing from a great guy.  Its in good hands I think, I say "think" because John confessed to me in a moment of weakness that he had thrown a Selmer 50 watt Crocodile skin amplifier into a SKIP.
I wish I had someone like Mr Rex!!
SHOCKING 1960's PHOTO OF MRS BOB
During the lockdown I went into the attic looking for old photos, as one does, and came across a photo of Mrs Bob, the woman I love, Mother to the Bobettes and General Builder and Plumber in residence.   I found several including the one below, which is of Mrs Bob and her family on holiday in Blackpool in 1960, the very year of the birth of Brumbeat and the swinging 60's.   Within a year I would be playing my first gig and she would develop a liking for The Bunty, that famous girls comic.  You can tell that she was 'before her time", in a fashion sense, for having John Lennon glasses before he was even famous.  She would have been great in The Shining.
She was from "up t'North" and me from Brum, we met in Newquay, Cornwall where she had spent some years as a bareback rider for Billy Smart.
She looked just the same but with a horse underneath her. It's no wonder I found her so irresistable.  Love the one you're with.... 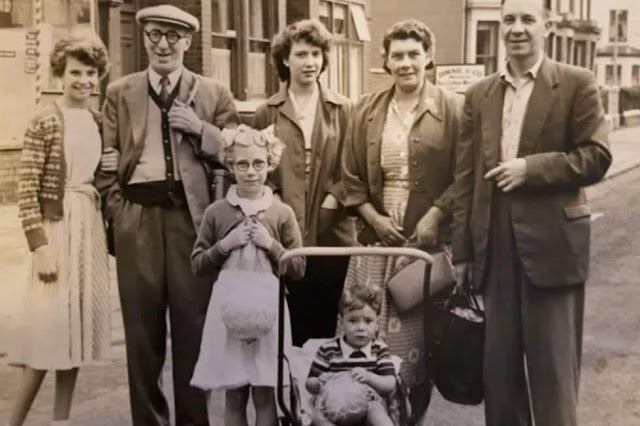 FINALLY
The UK is the greatest place on earth and dont you forget it!!
UTV!!
Bob
Copyright: Bullsheadbob
Contact:    Bobsbullocks@Gmail.com