Hello Brummies, Brummie musos of the 60's now in their 70's, all of those around the world who check in to the blog and all the girls I've loved before.

Happy New Year!  Well 2020 was the year of high drama when everything could have gone "tits up" very quickly.  As if the Covid situation wasn't bad enough we had a would-be Hitler in the White house, lieing, cheating, setting families and races against each other whilst guiding pension funds into his own family coffers.   It felt good to be British, even though half the UK hated the other half who didn't want to be a part of the EU and some Jocks who don't want to be in the UK even though more than half of them voted to stay in the UK.  So, for the sake of equality and my own peace of mind I decided to hate everyone,  apart from Big Al and a few close friends, problem solved.  I hope that this year will see some resolve to get back on our feet again and return to some normality.     I had a wonderful fun Christmas despite not being able to hug and kiss my family.

Santa delivered my Tascam 24 track SD recorder and I have been fathoming my way through its intricacies and many digital delights.  Strongly recommended purchase if you have some spare dosh.  For me, a much better option than some computer software.

On the run-up to Christmas I was pondering, as you do, what I could

give to certain folk and one problem was what to buy for my daughters partner who is a good guitarist and has a luthier built Telecaster plus a couple more tasty guitars plus a wondrous amount of expensive pedals and such.   The good thing was that, like me, he is a whole music lover and is happy to switch from jazz, to blues and rock and country so that broadened my options.    I opted to take a bit of a risk and buy him something moderately cheap, which is a word that doesn't feature in his vocabulary, so he might not like it.

I bought him a lap steel guitar and once again it is a Harley Benton.  I bought the HB Slider II from Thomann which came with a soft cover, lead and Steel for under a hundred pounds!     I can tell you now that he Loves it!    I'm not surprised either, when it arrived at home I checked it over and was amazed by its fabulous appearance, attention to detail and overall finish.  It's not at all what I expected for comparatively little money and after hearing him play it I am more than happy with its sound.   Back in the day you would have heard it only on things like "Sleepwalk" and it was regarded as some kind of novelty instrument however with guitarists like Dave Gilmour using one with Pink Floyd it gave it a touch more credibility and furthermore its sound featured heavily during the Jackson Browne and Crosby and Nash years. 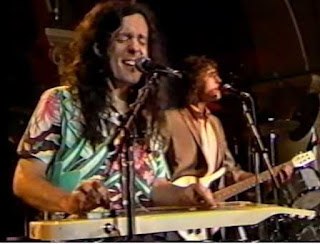 The person who provided that sound for our American cousins was the magnificent David Lindley who could be as hard and dirty as you like or soft and ethereal such as on Crosby and Nashs "Out of the Darkness".
If you want to see one of these at its rockin' best watch Mr Lindley playing "Mercury Blues" on YouTube and any misgivings you may have about it being a seriously good instrument will be cast to the wind.    Remember this too, the Stratocaster with its tremelo arm was designed to mimic the sound of an Hawaian lap steel guitar.

I have been offered a lot of gigs during this virus riddled year and turned them all down, I play, to play "live" and to fully engage with the audience, not to have people seated 6 feet apart in a sterile environment or waiting to be told the gig has been cancelled.    We are all prisoners of the virus and although I feel for all the technical and sound crews who have been shelved until things improve, they are not the only ones to suffer....its most people.  Being a musician is the hardest of professions as it is with heavy financial investment for little or no return for the majority, even in the best of times, but earning or not, it doesn't remove the passion and love of making music so I live in hope that once we get playing again, that all you musos out there who have been honing your skills during this period of inactivity will come out refreshed, inventive and busting a gut to perform.

I conclude this piece of frippery with a wish for peace, love, tolerance and understanding for all.  Thankyou to the NHS for everything they have done to try and improve peoples lives whilst putting themselves in danger on a daily basis.   I am exceptionally pleased that we have left the snake pit that was the EU but it struck me that the majority of younger Brits have never known what life was like before we were all institutionalised so I understand their fears.  Perhaps now as we forge ahead with our own destiny safely back in British hands they might even come to enjoy the pride of being British with all our technical and scientific knowledge and expertise in every field and let's not forget......world leaders in the music field and especially Brummie musicians and bands.

Take Care of the Ones you Love,