Another month bites the dust and what a month it was!! Hot as anything followed by the lightning storms that filled the heavens for a couple of days.  Followed by more storms and fierce wind.  I've had fierce wind more than a few times mind you and recommend a bowl of  stewed plums for a couple of days...... The live gig situation is terrible and the forecast doesn't look too good either,  nonetheless we need to keep our spirit alive and what better way than a touch of reminiscing back to the early 60's when there was live music in the form of pop groups in every pub in the City of "Brummagem by the Cole". What a fantastic era. 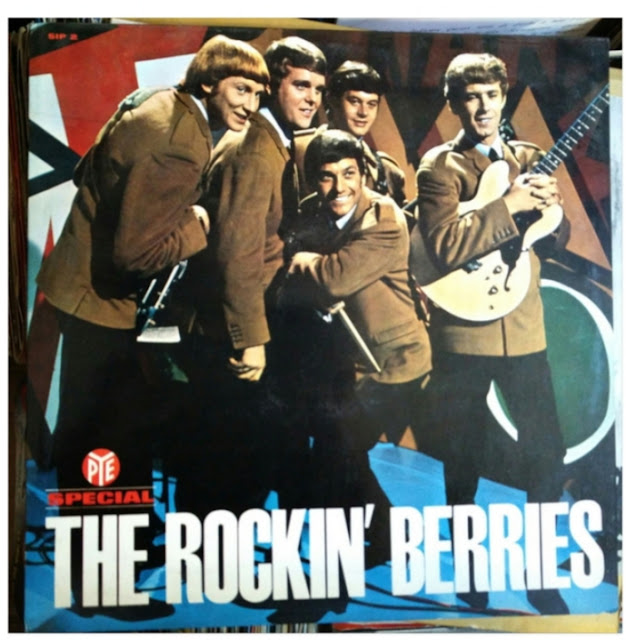 As some of you will know, we lost the great Chuck Botfield, lead guitarist and founder member of The Rockin Berries on the last day of June.  Due to a commitment I only had time to make a passing comment so please read the article by John Woodhouse at Brumbeat.Net by clicking HHERE.   Chuck was a lovely guy and inspired a whole generation of Brummy guitarists including me.  As a passionate learner I would go and see him occasionally and take my little pocket note book to jot down things I could work on or chord runs and things.  He played Chuck Berry songs just like his hero!!  He had fire in his belly in those days.

As can plainly be identified The Rockin Berries were formed at the height of Chuck Berry mania when BRUMBEAT was at its zenith for Beat Groups and in Birmingham, Chuck Botfield was one of its leaders.

Johnny B Goode was the first thing we all had learned and the Chuck Berry rhythm suited the guitar like no other for Rock music, pulsating staccato half notes stabbing away over, four to the bar, bass runs in line with a four on the floor bass drum  BEAT music.  It opened the flood gates for groups to take any song and "Berrify it" by playing it faster and adding the rhythm.   A famous example would be "My Bonnie"  by Tony Sheridan and The Beatles.   The singer would be equipped with marracas and tambourine as extra percussion for those Bo Diddley moments!  With the arrival of the guitar solo the hi-hats would be opened to crash away, increasing the madness and during the "Screaming Times" the girls would go crazy, the whole band encouraged by the response would be elevated to greater heights and I, for one, would be dripping with sweat, head down, really really, playing my heart out.

All those hours of constant practice were paying off and the excitement generated by the music filled me like nothing else could, I hadn't even heard of adrenalin but I was swimming in it and the group were always so enthusiastic it almost took your breath away.  There were stages we, the first wave of electric guitar groups, wanted to achieve, first paid gig, getting suits, getting a van and then getting it covered with lipstick messages from the fans then more gigs supporting bigger bands, getting a fan base, being top of the bill,  improving all the time, better equipment, getting a record contract and then being "Screamed at" and.....getting pulled off stage by eager females.   We had seen other bands like the Stones and Beatles etc being mobbed by hordes of teenage girls and wanted to experience the thrill of it all....adoration!!

It was a crazy, exciting time for groups and although I'm glad I experienced the thrill of live performances from basic Rock, through the psychedelic phase and up until the end of that wonderful decade the BEAT phase was by far the most enjoyable.

Through it all, the Chuck Berry riff, intros and solos appeared in differing forms and have done ever since although, these days, it lacks the excitement and emotion of having been through its creation and played it first

I have a Tanglewood Electro acoustic which I have owned for 22 years, it has a beautiful warm tone and anyone who plays it loves it.  Its pre-installed Fishman pre-amp passed away peacefully recently and no amount of battery changing, swearing at or tapping it with a screwdriver would revive it.    I contacted Tanglewood asking if there was any replacement available, sadly no, not for old guitars.  I love the guitar and use it with a Marshall acoustic amp.  Now, I live in a remote neck of the woods so, owing to this lock down malarkey,  the normal supplier wasn't available so I looked on Ebay to see what I could do to "solucion-ize the problem" and saw a Fishman that was about the same dimensions as the one that needed changing.

I purchased a Fishman Presys blend Preamp, I was impressed by it having a microphone inside the guitar body as well as the normal bridge piezo pick-up strip which you can blend together to get a greater range of sensitivity and tone. 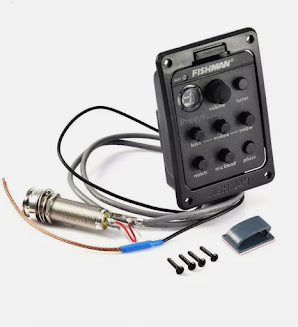 There is always a danger of forgeries on sale and indeed there were a deal of suppliers advertising the same preamp all at different prices starting at around £12.  Buying the most expensive doesn't guarantee you are getting the genuine article either,  so how much of a risk did I want to take? 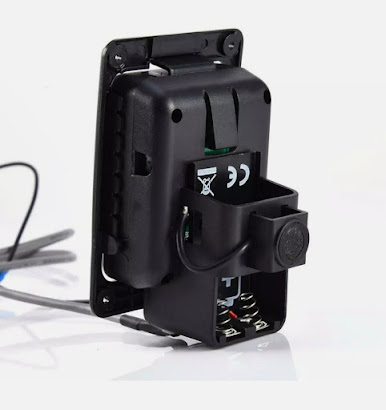 I went for £25 plus post thinking if it blows up I will have to suck it up and say I'll never do that again.   So, anyway within a week of paying it was at my door.  No luxury packaging, ziplock bag with Fishman tag inside a padded envelope.   The contents were all there minus the 9v battery.

The build is good, everything clips together nicely, there are some pictorial fitting instructions but I found some better installation videos on Youtube.   Taking out the broken one was easy.  The refitting process was just a question of sanding the opening to accommodate the slightly wider Presys and from then on it went smoothly enough for someone who is used to doing fiddly things, it would have gone a lot smoother had I purchased a new set of strings to replace the ones I had removed!!    3 days later with new strings attached, I slipped in the battery, attached a guitar lead and turned it on, there was a bit of a squeal from my bedside mini Laney amp that sounded "mistake like" but was resolved by me tightening the newly installed Jack plug connection, then it came to life.   It sounded a whole lot better when I connected the guitar to the Marshall however I will have to get accustomed to regulating the balance between mic and piezo till I find the "sweet spot". 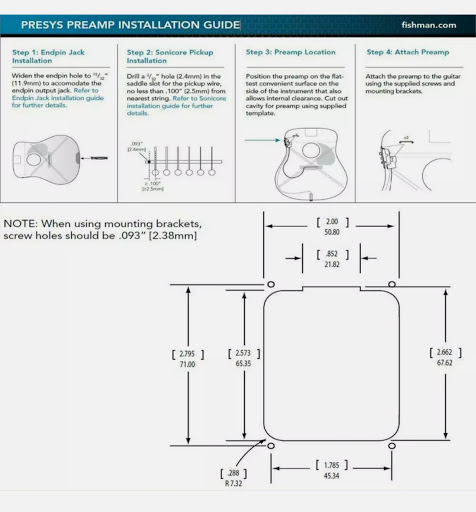 I would have to say that this system, whether a knock-off or not, does the job fine, of course I don't have another example to judge it by.    It is a comparatively easy job to do and well within the grasp of someone with a bit of common sense and pacience, so if you have an old acoustic that you would like to use in your stage act or for recording without taking the expensive route of buying a new electro acoustic guitar you may find this a much cheaper option.   A Stanley knife, a drill and drill bit, Phillip's head screw driver and some masking tape is all you need, plus of course the pre-amp.    It's the cheapest way to electrify your acoustic guitar for stage or recording use and you get the satisfaction of having done it yourself.    Good luck!!!!  I should add that you might want to think twice about doing this to some rare or expensive instrument!!!

Please be careful out there, do wear a mask, do use sanitizer, we have to live with this awful virus so please try not to pass it on.  That aside, be as happy as you can and love the ones you're with.