What a scorcher!! nobody sliding around in the mud at Glastonbury for a change and FREE WATER and sun block at a festival is unheard of before, good job Mr Eavis.   I am not one of those who is lucky enough to go to Glastonbury this year but am lucky enough to play at festivals occasionally although the word Festival is so widely used these days it could be anything.  Mrs Bob and I go to the annual "Festival Shagstock" at our local boozer "The Shag and Crumpet" even though its not a Festival at all, its in the car park.  This year the bill  consists of the village dance troupe of 6 to 13 year old girls, all at differing levels of ability, calling themselves The Little HorrorZ and HOT STUFF followed by a Silent Drill Marching Display from the Girl Guides - which would be the same girls who just did the dancing plus hat.  "Big Dave" is on next with his Tribute to the hits of Jess Conrad, so that means he will be off a couple of minutes later.  He had been in heated discussion with the landlord that he should be the last act on because he'd played at least two prior gigs.
However, top of the bill is the landlords son with his pre-puberty band who are "Satans Henchmen" well, when their Mums let them.  It will be their much anticipated first gig and will be attended by all the girls in the village who just happen to be......... less hat.  A splendid time is guaranteed for all.

It was interesting to see that Janet Jackson was on the same thinking terms as "Big Dave" and perhaps, based on the amounts of gigs she'd done, had the official Glastonbury poster reprinted in America putting herself top of the bill.  Below is the Glastonbury poster. 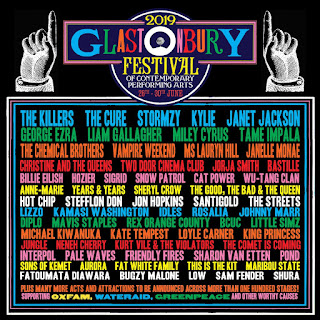 Here is the poster that Ms Jackson sent out as a tweet. 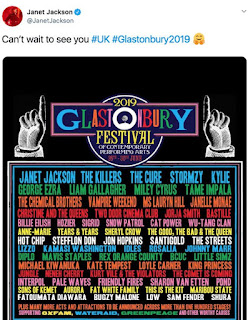 A few years back The Wurzels were booked for Glasto but pulled out because they found out they weren't on the Pyramid Stage......it doesn't get more bizarre than that for me.  The Wurzels??

A BIT OF HISTORY
The birth of British Rock and Roll was televised every Saturday evening "Live" at 6.05 and was aptly entitled the Six Five Special.  Although naive by today's standards it was a must in our house and my 2 elder sisters would be getting some jive practise in whilst it was on before going out to The Galleon Dance hall close to where I lived.   My Father thought they were going Ballroom Dancing but they would arrive at the Galleon and change into their Bopping gear.   Six Five Special was the only TV show that catered for the modern music of the day.  A couple of the acts were a bit suspect and not really Rock and Roll like Don Lang and His Frantic Five, a Trombone player and his jazz band with a name change and Miss Winifred Atwell, a Trinidadian pianist.  However, the rest was Rock and Roll and we loved it.   It became the music of the youth and furthermore, started a rebel based social structure within the UK.  If ever there was someone who portrayed all of that anti establishment rebelliousness it was the fabulous.........

WEE WILLIE HARRIS
There were two people who stood out on that show for me and that was Joe Brown and the fabulous Wee Willie Harris.  At 5 foot 2 inches, Willie had been the resident pianist at the 2i's coffee bar in Soho, the birthplace of British Rock.  His appearance was dramatic for those times, pounding away on the piano like Jerry Lee on acid, he was wild.   With his drape jacket and bow tie and THAT HAIR!! totally unacceptable in British Society, so much so he was considered a decadent influence, by the British Press, on the youth generation of the day moreover, the programme 6.5 Special was considered to have crossed the line, morally speaking for promoting him.   It was big news.  For me he was the first Punk, disorderly long red hair, drape jacket and absolutely insane on stage. 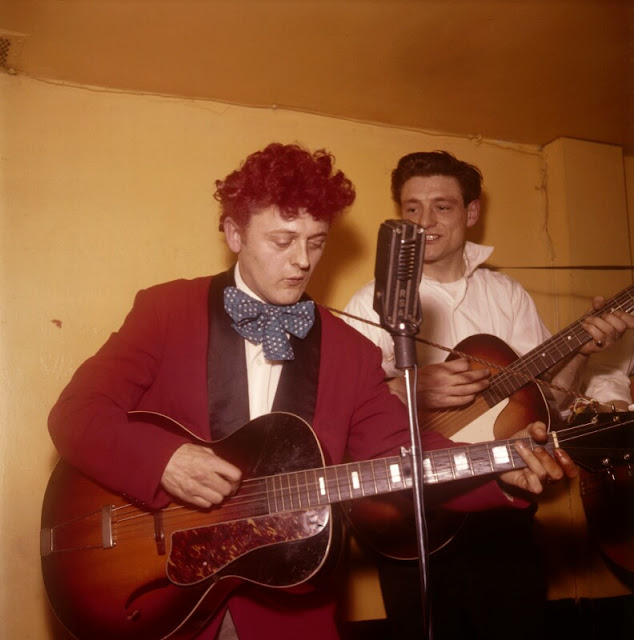 Playing the guitar was a necessity.  There wasn't always a piano available to a touring musician.    Willie had his first 78rpm release, "Rockin at the 2i's in 1957
followed several others including "I go Ape" but he failed to get a record into the top 10. 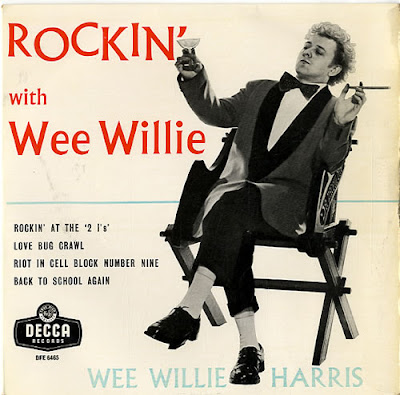 He was the Headline Act of the Moss Empire Live Tours and was loved by the kids and hated by their parents. Music taste changes but that didn't mean he stopped playing and performing, because he has been at it since that first job at the 2i's playing everywhere across the world.

I've heard recently that he has finally hung up his boots and called it a day.
His final retirement.....  Although that could change.

Willies fame was a roller coaster affair like many long standing acts.  He was fortunate, in the 70's, to have been mentioned in Ian Dury's song "Reasons to be Cheerful, Part 3" and had a resurgence onto the scene.

Willies last CD release was in 2018 appropriately on the "Rollercoaster" record label. The Wee Willie Harris story.  Sixty one years since that first recording.

I believe its true to say that the period that had the most influence on the British musical youth, including those who would grow up to be the 60's rock mega-heroes from Birmingham, was from the late 50's onwards and like me, those mega heroes too watched the 6.5 Special on a Saturday evening, we were the same age and with our newly acquired acoustic guitars we copied all their moves and songs and all had our favourites and we became the groups that emerged in the dance halls of the 60's influenced purely by these rock n rollers except that, we were louder.   It is reported that John Lennon and Paul McCartney queued for his autograph at an appearance in Liverpool.

He was energy, he was rebellious and that little guy with his shocking unkempt red hair was the meanest of the bunch.  One of my heroes.  Thanks Willie.

FINALLY.
Its Barbecue madness here.  I've put on on pair of shorts for the occasion but have bolted the back gate so nobody can see me in them, the Bobettes think its funny but you don't want to go around frightening people unnecessarily do you?