First of June means it's the start of summer in the Bob household, over the Whitsun Bank Holiday we watched Cliff Richard in Summer Holiday whilst browsing through holiday brochures, scattered across the table for far-off destinations that I doubt we will ever be able to afford to visit.  It was great to 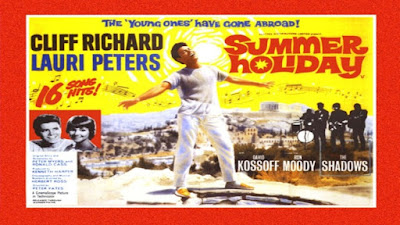 see Cliff and The Shads' again and I was mentally whisked back to my youth, being totally absorbed by that group and their effect on the British music world of those days, just a stunningly good group.  It pains me to hear young guitarists these days mocking Hank as a guitar force.  Everything has it's time though and personally I'm pleased to see the back of that Prog Rock noodling shit, as least Hank had some soul to his playing.

Mrs Bob has been to the Bank holiday sales in town and returned home grinning from ear to ear full of pride with her thrifty shopping bargain of a new bikini that was two sizes too small but only cost 8 quid.  "I beat off three other women for this, the ticket price was originally 35 quid" she said, showing me the old label.   She then signed up for a 3 month Gymnasium 'Bikini Special' membership that cost 90 pounds!!   "Thats cheap" she said.   Stuck for words.

Anyway it's given me a bit of peace because in preparation for going to the Gym she has taken to wearing her leotard and going for daily jogs, she uses the MP3 player I gave her for Christmas that I'd pre-filled with Cheryl Cole tracks, she says they make her run faster.   I keep saying "Lucy you can't run away from her, you have to turn it off!
DAVE HYNDS
Most important thing first.   I am very pleased to say that ex Cheetahs and Fairfield Ski drummer Dave Hynds is back on the scene playing drums and writing songs again after being away for a long time through illness. 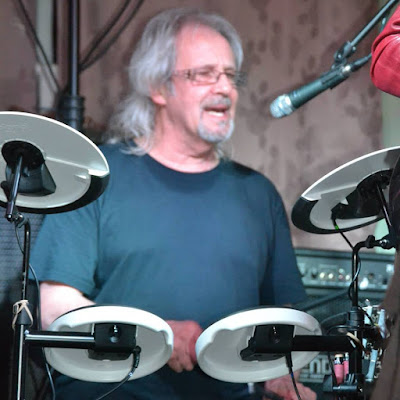 Great to see you back and 'at it' again Dave.  I know I won't be the only one who is gladdened by this news.   Onward and upward big man.

ANOTHER GIBSON RARITY
THE AMAZING GIBSON L5
Not too long ago I did a piece about a Gibson J200 King of Rock, owned by Paul Brunt.  My advice at that time was if you wanted to buy a guitar which will grow in value then you should always go for 'one off' run of limited editions of below 200. I think the King of Rock is valued around 4000 pounds for the low serial numbers.  Now if you've a bit a cash lying around and are worried about the UK and what could happen to the value of the pound should Brexit happen.  You could think about buying something like this guitar, an L-5 in an extremely low edition run of ONE and is currently available on EBay. 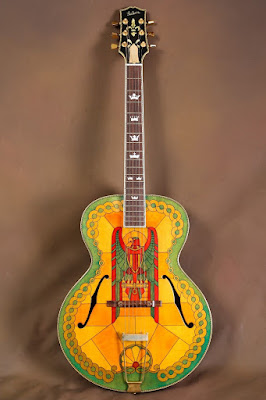 GIBSON L5
I shall just paraphrase some of the details from the advert for this stunning, one of a kind, stained glass style Gibson L5.


Made by top luthier Bruce Kunkel of the Gibson Custom Shop...it is the only one of it's kind.  It is in mint condition and comes with all original paperwork.

Visit EBay for all the mouthwatering details of this fabulous thing.

It's sporting the King of Rock pearl inlays as used on the J200 but the headstock is a different shape. 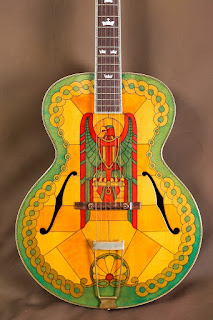 The downside of owning such a beautiful instrument as this does mean you would be worried about getting an accidental 'ding' in it SO you could, at the same time buy a guitar to play whilst looking at the Stained Glass beauty in a glass case.

I think I could look at this piece of art for a long, long time, I wish it were mine.   One thing if you're thinking of doing one yourself is that Bruce Kunkel is brilliant, massively respected and works for Gibson.   You probably don't.

This Bruce Kunkel Gibson L5 is on offer at
27,345 pounds 71 pence.  The auction finishes at the end of the June or thereabouts.

UPDATE
FIRST MUSIC VIDEO
A while back I wrote a piece saying that the first proper worldwide music video made was by Alex Wharton, ex manager and producer of The original Moody Blues.

An iconic piece of black and white film for the 1964 song Go Now.  Two months ago I was contacted by someone from the British Film Institute who are currently compiling some data to produce the definitive list of who and what came first and I was pleased to pass them on to Alex.

This caused me to re-investigate the claim on hearing that there had been a reference to a Czech film promoting a 'review' in 1958 as the first music video. The song is called DAM SI BO BYTU.    There is something here though that we need to clarify though, is that a Pop Music Video? or simply advertising for a show?   In 1958, in Soviet controlled Czechoslovakia, you would have had to be one of the chosen few from the communist party to actually own a TV so hardly anyone would have seen it for a start. Based on that premise we could say that any piece of music recorded on film, whether viewed or not, was a music video, and that is clearly not the case.

In 1927 the first "talkie" film The Jazz Singer was released with 6 music tracks sung by Al Jolson, it was the first recorded piece of singing on film so one would presume that preview clips of the film would have been shown in cinemas advertising the movie....so does that mean that it is the first music video and not the Czech one?  It's confusing to say the least.

I looked around the net and other places investigating further and although not relevant to the claim as being the first, I came across a remarkable 1968 music video, also from Czechoslovakia. Now it may not come as a surprise to learn that I don't speak Czech but some clips explain themselves through visuals and I have one here that you should definitely watch.  The song is called TRA LA LA but I believe that it translates to:

BIG TACKLE BOY
Synopsis:   Pretty girl is loved by a Czech chimney sweep but she discovers whilst on the roof with him that he only has 'small tackle' and whilst she loves his cheeky smile, she fancies his older and fatter, brother who makes his living as an Oliver Hardy look-alike and is endowed with an appendage that has to be carried around in a wheelbarrow.  The presenter of this 1968 clip appears to be under the influence of some halucenogenic, mescaline based drug.
Click on the link below, you won't regret it.

I once read an interview with Cliff and he said "I used to wake up and feel Elvis inside of me"? Uh Huh.

OK folks, be kind to each other and enjoy your holiday planning.