How Do!! Brummies and Music Fans,

Last month the popular music world lost one of it's greatest assets, someone whose skill graced a million songs and influenced and affected guitarists such as Richie Blackmore, Jimmy Page, Jeff Beck, Eric Clapton and me!!   Thankfully, I was the only one to successfully avoid guitar glory....."Well done Bob" you say, "Think nothing of it mate" would be my reply, just in case you were thinking of commenting on that fact at a later date. For the uninformed, there were simply brilliant guitarists around before Jimmy Page.............I am sick to the back teeth of reading that Jimmy Page played on this record or the other, or references to his 'Licks and phrases" which he got from all the blues greats and then I get even more pissed off because he never denies any of it.  Would it be too much to ask him to say "Actually that's not me", certainly in the case of solo's like the Kinks epic "You Really Got Me" which is Dave Davies for sure and which caused a real rift between the Kinks and young Page and his cohorts.   The fact is, the guitarist that you were more likely to have been impressed by on a lot of those records, thinking it was Page, would have been Big Jim Sullivan.   He was the real ace professional session guy and I'm not going to list all the records he appears on, I doubt if he ever knew the true quantity of sessions he did; suffice to say it was a massive catalogue and Jim was "BIG" not only physically but really was The Gaffer when it came to studio work.

He was the master of the guitar and gave tips and lessons to Mr Page and Richie Blackmore alike.  He was Tom Jones' guitarist for many, many years and you don't get a job like that if you're average!    My own preference of his session work would be the driving guitar solo on P J Proby's "Hold Me", this was the FIRST use of a Fuzz Box on record in the UK, not by Keith Richards on "Satisfaction" as is often claimed.  What a sad loss, I raise my glass to the King of the Session Guitarists BIG JIM SULLIVAN.

BOB'S GARDENING SECTION
Age Has it's Benefits
When it comes to a Smelly Bush!!
As you all know I'm a devotee of the soil.   My fingers have probed around many bushes in the past which have left their distinct aromas to remind me of where I've just been........I know a stinkwort from a fresh flowery hybrid alright!... it makes me think that, if I know bush aromas, so would anyone else my age and presumably with some of their own 'furtling' experience.   Well apparently older folks in Bedford are lacking in that area, or are they?

Recently the Bedfordshire Police knocked on an elderly couples door to ask why they were growing this smelly old bush:


﻿The Bedford Police said they'd never seen a Marijuana plant quite as large as this.   The elderly couple said they had innocently bought a cutting at a Car Boot sale and quite rightly planted it in a nice sheltered position on a South facing wall to catch all available sunlight, not forgetting of course to pinch out the growing tips when the plant had developed four sets of leaves, feeding it weekly with Nitrogen.  Naturally, they kept a large quantity of natural manure from the compost heap close at hand in a large planter, that's quite a wise decision for the older person, have your manure where you need it most, you don't want to be humping barrow loads of manure around all the time, it's not good for your back for a start.

BOBS TIP.   From a gardeners point of view I would say that they gave it a little more Nitrogen feed than necessary, after all it only stimulates leaf growth which is all well and good in the early stages of a bush's life cycle.  However, a more caring and experienced gardener would definitely have eased up on heavy Nitrogen feeding and thought about replacing it with phosphate a little earlier, then they could have looked forward to far more healthy and abundant flowers, which can be cut and dried and arranged in a vase if you want to.   Our nephew Timothy seems to be fascinated by them and constantly takes snippings.

After the discovery, the couple allegedly invited the Police indoors to have a "Nice cup of tea and a large Muffin" each, after which the Police emerged and pronounced that the couple had obviously made an innocent error in their purchase, in fact, they had all been laughing and laughing and laughing about the incident over tea; furthermore the constabulary congratulated them on their extensive Bob Marley and Willie Nelson record collection.

The plant was rumoured to have been removed to the police allotment association for further investigation and the elderly couple were adjudged to have been unknowing victims.  No known photograph of the couple exists but I have it on good advice that this could be them: 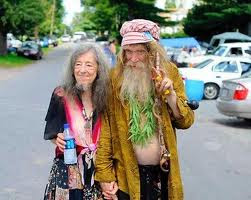 This photo might even be from that very car boot sale where this obviously innocent couple purchased their cutting.﻿

I have to say right now that they are not alone in this sort of experience at a car boot sale, me, Crazy Malc, Mick the Plumber, The Skiffle King and Nobber have all been innocent victims of buying a wrong cutting.  In Nobbers case he made a total of 132 bad purchases, "I thought I was buying Pansies, it was all just money going up in smoke" he slurred.   I'm pleased that the constabulary are treating this fad for selling illegal plants, by unscrupulous individuals to the elderly, with the maturity that these frail beings deserve.

BOB INVESTIGATES
Now maybe it's because I was influenced by LP covers during the 60's, looking for hidden clues and messages in the photos, that made me return my gaze to the official Police plant photo further and I came up with a couple of observations that made me think that perhaps they weren't that innocent.  It looks like there is a small bong lying on the ground to the left of the bush and what is that little animal ornament I see lurking under the foliage??   An incinerator dustbin was wisely kept close to hand to destroy the evidence garden waste.  Protective netting had been positioned around the plant's front to presumably stop Mr Rizla, their pedigree Shitszu from "messing with the bush man'' after Rizla's earlier leaf eating experience when the dog was found to be tightrope walking on the washing line.

There's no doubt that I could be wrong in my assumptions.  However, could it possibly be that the Bedfordshire Police hadn't watched the episode of "CSI Bedford" that dealt with obvious clues??

BOB'S FEMINIST SPOT
Some people scoff at Feminists saying that they over-react at the slightest
provocation.   Nonsense I say!!  Feminists actually like some of the things men like, beards and moustaches for example.    I'd best mention though, from personal experience, don't cross the road when you see one coming towards you, you will only make them angry; just let them barge you aside and, as they pass, you might even hear that telltale static 'crackle' discharge of their leg hairs rubbing against each other.   Anyway I digress, all the world including Feminists love cuddly animals and Scottish Jigs and Reels to name but two because really you can't do all this jigging about without a woman to hand now can you? and Feminists are sometimes women too.

As an homage to the 'chicks', this music blog and my new book 'Feminism - Let's make it legal', here are a couple of LP covers from the Brumbeat period of time to remind them that I, 'Bob of Bullshead' am at one with the Sisters.  Let's start with a nice cuddly animal. 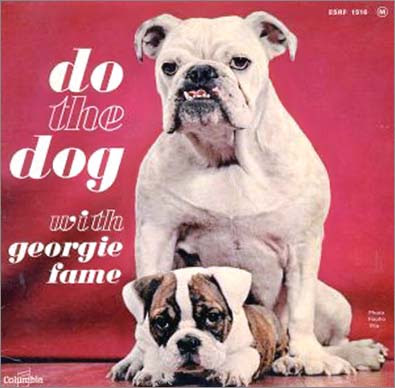 Well thats the lovely cuddly animal taken care of, now for the Jigging. 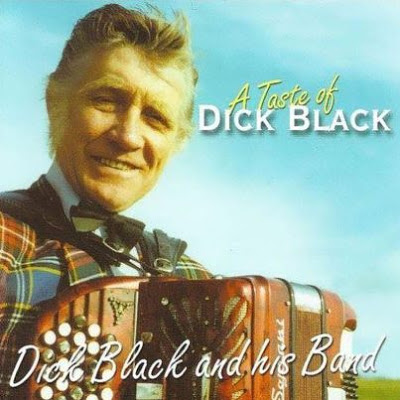 The Pirates!! The Pirates!!
They were the first of the best bands to come out of the Rock and Roll era and rip the dance halls apart with their electric stage performances.   Brian Gregg, all round good guy, incredible bassist for The Pirates and co writer of 'Shakin' All Over', Britains greatest rock song, is going to Pontins for a weekend next July and whilst he's there taking a paddle and scoffing rock, he's going to join up with Pirate's drummer, Clem Cattini and 'do a Pirates gig' at the Festival of Rock n' Roll.   This is a real opportunity to see this iconic British Bass player in concert with his other iconic mate.  More info will be forthcoming nearer the date.

Just in case you need to be reminded what a select and respected musician Brian is, here is a photo from a gig he did a few years back with Rod Argent,  Clem Cattini, British Rock n Roller Terry Dene and great but unfortunately late Big Jim Sullivan.  I'd have given my right arm to have played with this line up. 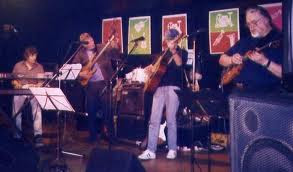 PETE OLIVER AND THE
DALLAS RANGEMASTER 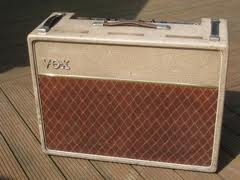 The original brown VOX AC30 was the amp everyone wanted to own when it made it's first appearance.   It had a beautiful clean sound and of course had 30 watts, and had VOX in gold on the front!!   There was a drawback though because when we all started playing harder rock music, it was definitely lacking in biting treble, the sound of the time.  We were on a mission to pierce the eardums of anything that passed our vicinity, I sort of regarded myself as a public menace.....luckily for me I had chosen the economically enforced route of a second hand Selmer Twin Selectortone that did have some bite to it, so could randomly frighten old grannies who dared pass my house and when arriving for 'Bookings' I would raise an eyebrow and sort of sneer at the toothless Brown tolex freak belonging to the guitarist in the other band.
But not for long........................

﻿
﻿I was recently chatting with the very nice Brian Nicholls, the Black Country's 60's music expert, about old kit and he said he'd had a 'Brownie' and remembered going into Ringway Music in Birmingham and discussing the problem with Pete Oliver.   "You should definitely buy a Dallas Rangemaster then" said Pete "It will lift your amp and give it the treble boost that you need".  Brian, like the rest of us were his advice slaves and accordingly purchased one and was very impressed by it's increase in 'bite'.

A couple of Varsity Rag 'gigs' later, Brian re-visited Ringway Music and said "Hey Pete, there seems to be a bit of a problem with that Rangemaster because everytime I use it on stage it picks up Taxi and Police radio broadcasts as they go past"......

"Oh, yeah" said Pete with that broad smile on his face "They always do that".....

kinda cute, great story and very Pete Oliver. Very early electrics......Brian, I'm sure we all have fond memories of our wonderful old friend still.   There was an 'audience bonus' for attendees at Varsity Rag gigs in that, if you had ordered a taxi to go home, you would know when it had arrived.

Just heard that the Pope has named 7 Saints, I can't wait to hear his choice for the back 4, cause Southampton have always had a dodgy defence.

Rumour at the boozer is that there's a new Brummie supergroup being formed called 'Bev Bevan's Bev Bevan'.   As yet there is no clue of who is in the line up but Mick the Plumber thinks 'The Sabs' Bill Ward will be the drummer.