JOHNNY NEAL AND JOHN SINGER
Well here's a sight for sore eyes.   Johnny Neal sent me this recent picture taken at Yardley Wood shopping centre with himself and ex Birmingham band manager and promoter, John Singer, who was on a flying visit to the UK from his home in Spain.  "It was the only place we could both get to for a quick coffee together" said Johnny. 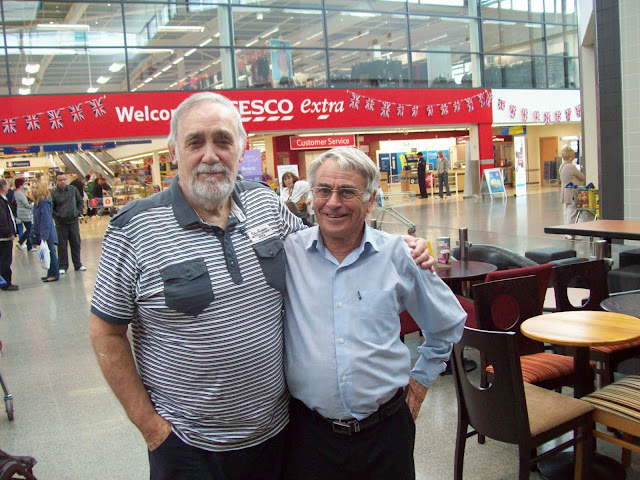 John Singer was manager to both Johnny Neal and, co-incidentally, myself and I have to say that he looks to be in good health and really hasn't changed much, it must be all that frantic 'busying around' he does.  Johnny has always said he was the best manager he had.  John Singer certainly managed a lot of the best musicians in Birmingham for many a year as well as promoting the famous Birmingham Town Hall concerts, The Carlton and Mothers at Erdington, The Adelphi and other venues, he also promoted gigs at the shrine of Brumbeat music The Bulls Head on the Coventry Road.  He drove a variety of Jaguars, we musicians had a variety of bicycles.    It transpires that there will be a Mother's reunion later in the year and John, as a former Director of Carlton/Johns Ents will be an honoured guest.   I bet he didn't pay for Noga's coffee....

When Bob met John
When I was somewhat younger, 15
I think, I was the guitarist for a reasonably good little R&B band and one day we went trawling around the agencies, as you did, saying "Hi" and hoping we'd arrived just as there was a need to fill some gig.

It was a great thing to pop in just as the agency needed someone because then you had a chance of getting some future work through them.  We all stomped up the many stairs of "The Munsters House", on Wake Green Road, entered the secretary's very small outer office, and through her open door saw John Singer at his desk in the "inner sanctum", he looked very dour and I got the impression from the way he looked at our appointed leader, Crazy Malc, resplendant in his  leather jacket and French beret pulled 'just below one eye" that he couldn't see a future for us at all!   It was at this very moment that Crazy Malc took it upon himself to say "Hello Mister Singer" and advanced into the inner sanctum with an outstretched hand, John Singer went berserk......."You can't just come in here, who the fuck are you???" " We're The Bollocky Bills of Bearwood"...."Fuck Off!! You can't see me without an appointment.......Now get out of here!!".

We all sort of stumbled rapidly out of the tiny outer office, in fact I don't think all the band members actually made it in to the outer office before we were ejected.    We all hovered about on the landing, whispering and sniggering but not daring to laugh out loud in case he heard us through the wall.   Just then, Crazy Malc took it upon himself to re-enter the outer office......."I just Fuckin' told you to get out of here!!" was heard at a decibel level equal to Conchord on re-heat!!

A couple of years later, when John was my manager I was working 7 nights a week, I reminded him of the 'office' incident and he said he remembered it and thought it was very funny.   I don't think he ever gave us a gig though. He said he thought we were far too risky which I always took as a bit of a compliment.    I'm glad to see he's looking fit and thanks Noga for sending this in and it's great to see you looking so good too mate.   One of the best voices to come out of Birmingham with one of the most important managers.  One for the scrapbooks.

DIAL 'B' FOR BRUMBEAT BANDS PHOTO 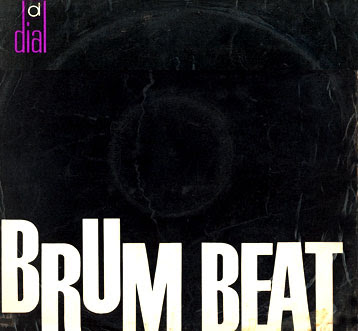 There are two 'BRUMBEAT' LP's in existence and the first of those is on the DIAL label.  In essence all the groups on this LP were Ma Regan's groups and were lucky enough to be able to get themselves recorded, albeit for one track and the LP was marketed as the sound of Brumbeat.

The recording itself was done at Hollick and Taylor on a kind of 'shuttle' basis.
Right.... "Next"  plink plonk plink plonk.........."Next".............etc and it no way represents the Brumbeat sound at all, dreadful, lifeless low volume recording levels that were all too prevalent in those days and the choice of music was hardly what you would call exciting (The Lady is a Tramp for example).  It was a good showcase for those groups though, most of whom, were excellent live bands.  Those appearing on this LP are as follows:

1. The Senators - She's A Mod
2. The Crescendos - Gandy Dancer
3. The Shakes - Silvery Moon
4. The Sinners - Sleepwalk
5. Frankie Williams And The Highcards - The Lady Is A Tramp
6. The Fortunes - Cygnet Twitch
7. Mark Stuart And The Crestas - St. Louis Blues
8. The Grasshoppers - In Love
9. The Two Corvettes - Runaway Guitar
10. The Solitaires - Over You
11. The Congressmen - The Shuck
12. Roy Everett And The Climbers - I Believe
13. The Renegades - Hungarian Mod
14. Cal Denning And The Cimarrons - Pretend

The Renegades, in their US cavalry outfits, would go on to have great success in Finland.  Perhaps that was because, on closer inspection of this photo, one of them appears to be slightly ahead of his time and was going for the gay vote.

Anyway heres a brilliant photograph for you of all the bands on that LP together in a kind of "school Photo" shot.   I have taken the opportunity to enlarge different areas of the photo for closer inspection by you eager beavers and hope you find yourself or some of your old mates in their.   Many thanks to the honourable Daniel O'Gallagher of The Solitaires (4th left, front row) for this truly great picture.  I see your hair was still in 'swept back' mode then Danny.   Some nice vintage guitars there too. 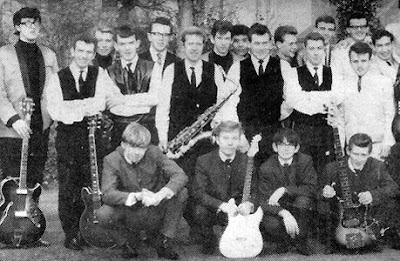 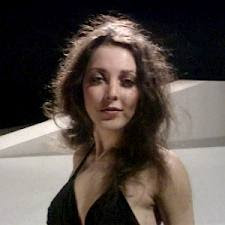 Well it was last year but only seems like last week that I announced the death of Flick Colby, the leader and choreographer of Pans People.   It comes as a real blow to see that Louise Clarke, founding member of the dance group, died at the end of August.

She was a stylish, vivacious, sassy and very sexy dancer.  I have no doubt that had she met me, she would have pursued me till I was all her's - I don't believe I would have put up much of a fight.  She was smokin'.

Ah, how time passes without you really noticing.

Take it easy, keep rockin' on and most of all keep in touch.

Great music isn't only for the young, if it's in your blood take every opportunity to reward yourself with the greatest pleasure ever....

Don't take the time to make excuses for why you can't play, it's not a kids game, just get yourself back to the reason why you started playing in the first place, the love of Live Music.  Well, all excepting my old mate Oggie who had more of a deluge of females in mind that I can't really fault.  He certainly cashed in.

OK that's about it for this month my old couch potatoes.   I'm off to watch Mrs Bob's 'Gymnastics for Youth Group'  good grief, I never knew you could squeeze so much into a leotard!!