THE ABSOLUTE FIRST POP MUSIC VIDEO
Much credit has been claimed by many different bands, including The Beatles, for having made the first music video to accompany a current song release.  George Harrison, with his normal and irreverent attitude to all things 'Fab' said, jokingly "So we invented MTV".

Well I'm here to state that the credit for having made the very first music video belongs to one man, ALEX WHARTON, ex-manager and producer of  Birmingham's, The Moody Blues.  In my 'In the Snug' interview with him last year we discussed, in some depth,  the recording session for Go Now.  I wanted to centre the interview on that particular subject for the publication but during our discussions we had talked, in passing, about music and the visualisation of songs as an art form.   Following the recording session of Go Now, in a developing Marquee Studios on Wardour Street (a half re-monted garage), Alex put up a black curtaining back drop, positioned some minimal lighting and filmed The Moodies miming to their current hit.

Filmed in black and white, half illuminated faces of the band, with Denny Laine's position in the line up being moved from the foreground to the back left of the shot through the course of the song, are perfect for this ethereal piece of film, I would say video but of course there was no such thing then.   The half illumination reminded me of the 'With the Beatles' LP cover that was out in 1963 so perhaps there was a possibility he had also been influenced by this striking LP cover art.  I didn't ask him if that was the case.
After filming the first session Alex superimposed another film of a girl, wandering aimlessly down a pathway, over the top of the Go Now film.   It's effect is hypnotising, giving the whole thing an atmosphere and helping to portray the sentiments of those very moving lyrics.   He brilliantly kept the superimposed girl 'shot' to the left side of the band video and her blonde hair appears to be floating around the heads of the band towards the latter part of the song as if she were in their minds.  Alex's creativity and artistic originality has either been intentionally forgotten, stolen, blatantly ignored or claimed by others who were a part of his life at the time.  I choose not to use their names because to do so would be to give them some credit.
Alex has never asked for any recognition, he is not fuelled by his own ego, there are enough people out there who have enough ego to fill a lake, dropping names and make spurious claims - a smokescreen for mediocre talent.   However, I truly believe that Alex deserves to be recognised as a real ground breaker.  I said in the last article that his handling of the 'Go Now' recording itself was a masterpiece of production and I still stand by that belief.  Others may disagree, but they would be the people who recorded Hermans Hermits or some other disposable music like that, clinical and sterile pap.

There have been some remarks about the similarities for the much acclaimed Queen video for  'Bohemian Rhapsody' and the Go Now shoot, particularly the latters closing shot.  Who is to say who or what influenced peoples artistic decisions.  Life is full of  subliminal images stored and re-utilised sub-conciously in some other form, music is based on that same formula.   What is true though is that Alex Wharton did it first!

The Beatles made their 'video' for the record 'Hello Goodbye' in 1967. Alex Wharton filmed the Go Now session in 1964. I don't believe that there was anything before that.    Alex has never recieved one penny for that piece of history, we on the other hand are all the richer for his efforts.  So for what it's worth, thanks Alex.
'GO NOW' - THE VIDEO
http://www.youtube.com/watch?v=qLgdcGEqgcw

IT'S NEVER TOO LATE TO HEADLINE!!!
Was it The Gorillaz that bored you to death at Glastonbury?
Had all your food nicked out of your tent?
Caught a dose of crabs "from the toilet seat??"
Big Name festivals are humungous by reputation and that being the case, anyone with a sense of fashion thinks they should be seen THERE because it's the place TO BE SEEN.   However, it doesn't mean that during the Festival season it was the best PLACE TO BE....Basic ticket prices for Glasto this year were 195 pounds!!....each!!   Now I'm a frugal sort of guy but love great music so I had an alternative Festival season and went to:
NETHERBURY 2010.
Firstly, Gorillaz didn't make an appearance.
There were no tents.

There were slightly less fashionistas...but
There was a girl that SOLD crabs!
and top of the bill were
SHINDIG 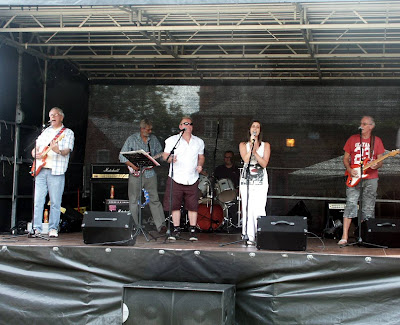 Tony Russell (left) had been featured here on the BHB Blog last August in the Hank Marvin/Fender Stratocaster piece.  Now he's a headline act with his band Shindig.  "We owe it all to Bulls Head Bob" says Tony, one mention and here we are, in a park".  Shindig showed their versatility and rocked their way through their set.

The band are a very much sought after act in the 'club' world where they bang out early sixties hits blended with a few of The Shadows instrumentals.  A real inclusive package for those who are into that period, what's more, these guys lived through all those times learning their craft with the changing times so there's no band more authentic than this one.  Look out for them. 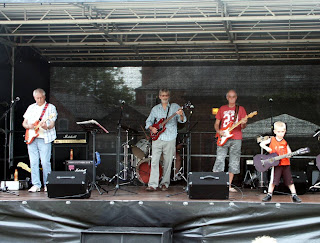 In the true tradition of Festival spirit, guest artists make surprise appearances with featured acts.  At Glastonbury Kylie Minogue teamed up with the Scissor Sisters.   Not to be outdone, SHINDIG  attracted the NETHERBURY debut appearance of the Black Country's hottest young guitarist 'Lil Charles.....or as he's better known 'Ar Kid'.  Armed with his luthier made guitar he laid down some hot gritty licks with Shindig providing him with a rockin' backing.   His sheer presence and confidence on the stage, struttin' his stuff was enough to have the crowd roaring their approval.
Go-Go-Go little Charlie!!!!!

THE FUTURAMA - FROM THE SUBLIME TO THE RIDICULOUS
Way back when, it was impossible to buy a solid body guitar and even when they became available they were either built in Italy, Germany or Czechoslovakia and imported and badged under different names for sale in the UK.  Those were the days when a 'solid body' electric guitar was simply seen as a faddish thing that would be short lived.  The Futurama III was made in Czechoslovakia by the Resonet factory and imported by Selmer.  It was called the Futurama III because of it having 3 pick ups.  It was an excellent guitar, given the competition from other guitars on sale at the time was limited and, although it's looks wouldn't have knocked you out too much, the electrics were really excellent.  George Harrison famously spent time drawing pictures of this guitar in his schoolbooks whilst daydreaming about success. 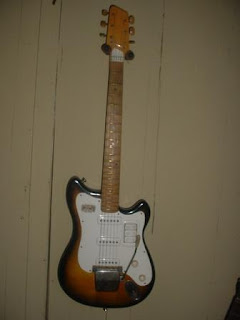 The guitar itself was quite well put together with 3 pick ups, volume and tone rotary controls and three  Rocker switches for tonal selection.  An uncomplicated tremelo arm assembly gave the opportunity to bend some notes, long before the physical finger bending of strings was a known thing.  Nice sunburst finish and natural fingerboard.  The strap button on the upper cutaway was not placed very well but apart from these little imperfections it was quite a stylish option for a budding guitarist and many, many blossoming guitar heroes chose this model as their first solid body instrument.


With the lifting of the UK importation bill, guitars flooded into the country from the USA and with the likes of Fender, Gretsch and Gibson models becoming desirable, those earlier guitars found themselves on hooks in second hand shops.  However guitars from the US were costly and with the enormously popular solid body Hofners and Watkins Rapier models selling fast at the budget end of the market Selmer introduced a new range of re-modelled Futurama guitars to increase it's share of that market but this time made by Hagstrom. 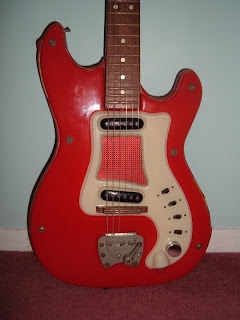 I remember very well passing Jones and Crossland and seeing, for the first time, the new Futurama models (II and III) hanging on the wall.  The body shape of the Stratocaster had been adopted, like its competitors, but that was the only thing that had anything going for it.   Cheap, tacky plastic covering, screwed onto the guitar itself was hardly impressive in my eyes.  Nonetheless, curiosity got the better of me and I went in and had a closer look.  The build quality was horrible and this guitar would probably have been better placed to sell in Woolworths department store, not a serious music shop.  It was like a toy.  I know that these days folk like to think that any guitar from the 60's has a collectable value, well if you are into kitsch and tacky memorabilia then this is the very thing for you.  But with guitar dealers asking silly prices of around 400 to 500 pounds for something that is only suitable to hang on a wall and look at, I have to say that they are incredibly over-priced.  If you really want a Futurama from the 60's for your collection that is worth having as an instrument and not as a design disaster, then the Czech made Futurama III is the guitar to get.   These comments purely reflect my personal opinion but I have watched some Youtube clips of this guitar and they tend to reinforce that this guitar sounds as bad as it looks - dreadful.

BRUMBEAT DOT COM!!
Hot news from the office.  The best Brumbeat site in the world is now to be found at http://www.brumbeat.com/   Add it to your list of favourites.  This is the only site about Brumbeat that offers you a 'second to none' list of band biographies AND a monthly blog filled with facts, features on old kit and guitars and of course my inane ramblings.  What more could you hope for?   It doesn't even cost anything.  Bloody miracle if you ask me.  We should be given a star on Broad Street for our services to Brummie rock music. 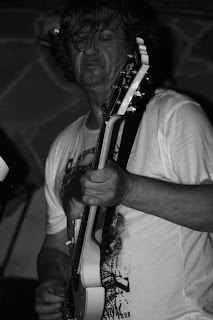 The ex-guitarist of The Uglys, is currently 'knocking em bandy' in the central part of Spain with his band of Spanish musicians at various blues and rock clubs.  "The club scene here is brilliant and vibrant once you've cracked the market and your name gets around, the audiences are knowledgable and very enthusiastic about music and we're going down very well".

"There are some beautiful clubs to play at and some fantastic musicians here in the land of the guitar.   I really had to lift my game, a bit like the old Brummie scene where you had to work hard and get a reputation to get into the better bands in the City".