Time to take stock of one of our Brummies Abroad....
GRAHAM ASHFORD. 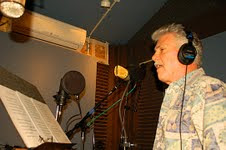 I have heard recently from Graham (Bobby Ash/Brumbeats) who has just returned from his annual six month stint living in Hawai and is back in California, slumming it!....  Graham is hard at work though, recording a 10 track CD of self penned songs for the Hawaian market whilst holed up back at home.  How glum must that be?  Its been hammering down cats and dogs back in the UK.

I, on the Black Country side of the Atlantic, have been revisiting some of my old West Midland courting places, Bilston Glue Factory, The Ammonia Plant at Sedgetree where me and Mavis the 'Manipulator' experiened some  real chemistry and my favourite of all time.....da-da-dada ......... downwind of the Golden Wonder Crisp factory at Tyseley, Mmmmm it was an olfactory delight on Salt and Vinegar day.   We move in the same circles, Graham and I. To me, of course, he's simply 'G'.   BHB and G - it's the dream ticket.
We'll be makin' music together soon, I can feel it in me waters.  All I need is the air fare and a grass skirt..

THE VICTORS, THE FUGITIVES AND A LASTING FRIENDSHIP
You may recall me publishing a photo of The Victors sent in by bassist Ken Reeves which I really liked and still do, in fact here it is again: 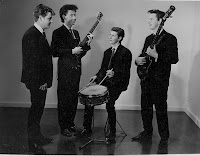 This was followed up, a couple of months later, by yet another photo, sent by John Parish, this time of The Fugitives which also caught my eye.

Unbeknown to me at the time, both John and Ken had been lifelong mates and had started out down the rocky, but grand music road together when they were sproglets.

John sent me a couple more photos including one of his earliest groups, which featured both he and best mate Ken who, during the next few years, would be bassist for The Victors, The Yamps and probably a couple more bands along the way. 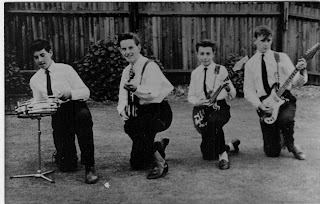 Ken and John in the centre of the picture.  Hofner Colorama in Johns hands, looking at the body size of Kens bass I'd guess at a Hofner club or Framus, doesn't look big bodied.  Not sure about the guitar on the right, looks a little like a Futurama but has the wrong headstock, could be a Vox maybe - giz a clue someone?. 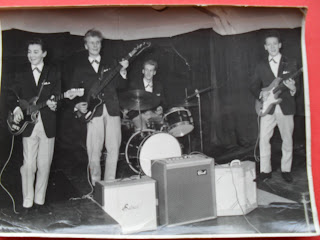 Here is another of Johns group photos, John on the left. They were very well dressed!! - from Solihull that's why - if they lived where I did, you shared a pair of jeans with the bass player, one leg each. Luckily, mine was a good mate, well the one in the early days was. The last one would have charged me rent. Had an extra pocket sewn onto his 'leg' to hide his stiletto.

Selmer, Bird and Watkins Dominator amps, Hofner guitars and a very early appearance of a Stratocaster.  No microphones are evident, so a Shadows type outfit I guess.   I really think this is quite an amusing photo because generally, in those days, a mark of a successful band (from another groups perspective) was based on their equipment, as it gave the appearance that they were earning a lot of dough.
I just love the way they have lined up their gear, in front of them!!   I just fall about at that, in a nice way that is...very naive and pure, just the best fun ever.  The smallest bands had some of the best times, having a musical adventure combined with energy and the love of playing music.   They were'nt spoiled by the work-like 'professionalism' of bigger groups.  The further you move away from purity, the less the enjoyment is.  I really miss those particular days.   BRUMBEAT was not just about big name groups.  It was that energy and enthusiasm on a massive scale for a while and ALL these guys were a real part of its foundation. 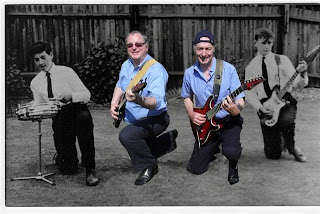 2010 and here they are again, still mates, still playing and now available in colour!! - of course,  nice guitars and matching clothes!!  It's real testament to the bond that musical mates have.  Good on you guys, you have my deepest respect.

Now then, when is it my turn to have the jeans for a whole night Dave?

ZELLA STUDIOS/RECORDS
In the June blog, Hollick and Taylor studios were featured but they certainly were'nt the only studios about in Brum that were popular with bands.   Let's talk about another very well known studio, Zella.   Zella studios had been known as Ladbrokes studios for many a year and the same amount of people who recorded at HandT recorded at this studio as well, which was situated on Essex Street. just around the corner from Jones and Crossland.   Spencer Davis, The Move, The Uglys, Idle Race, Band of Joy and Black Sabbath who made their very first studio recording there, "When I Came Down" (available on some bootleg recordings), were all regular customers along with a host of others.   It was a smallish studio but had some ambience to it.  Tiny control room I remember.  Johnny Haines had been the sound engineer under the Ladbrokes regime but now he was the main man there and did a good job.  When the studio name change occurred it also spawned Zel-La records of which there were many releases, and differerent coloured labels over the coming years.   Heavy Brum band Magnum who had used Zella extensively, ended up buying the studio from Haines in the 80's. 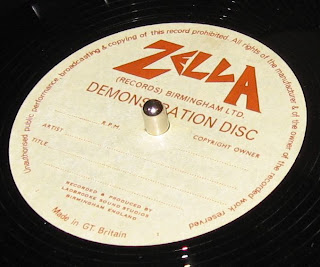 So along with all those better known names there were masses of demos cut there.  Psychotron records have notified me of a couple of demos that have surfaced recently and are currently for sale.  This is a great opportunity to reunite some musician with a piece of their past.  The two are as follows:

John and I were discussing the merits of early 30 watt amps.  There were only two real good 30 watt amps available in the early 60's, the VOX AC30 and the Selmer Twin Selectortone.  I had the latter.  I had gone the normal route of a small 8 watt RSC practice amp, Linear Conchord cage amp and then onto the Selmer.  I can't tell you what a 'step up' this was.  It was like growing up.

Why buy a Selmer over a Vox AC30?  The Vox was the amp of the moment, it was attractive with gold lettering and was used by the Shadows and later The Beatles too.  I bought mine during The Shadows phase. I guess it was probably a choice based on my available funds though and I bought a second hand blue/grey model.  The joy of this amp over and above the Vox was it's built-in tremelo effect which was really good AND also sported a spring reverb.  The Selmer had a great row of push button switches which would enable you to switch between preset tones, from a gentle bass sound right through to ear splitting treble.  I didn't venture much towards the gentler end of the sound spectrum however.  My Selmer had a bit of a dirtier sound to it than the Vox, which may have been the overall virtue of this amp or, quite probably had just got that way through years of me  'givin it some welly'.   It certainly loved playing the likes of 'You Really Got Me' right through to, and including, the Blues phase.  It is worth mentioning that VOX added their treble boost control as standard in 1963 which could well have been their reply to the sound that was already available from a Selmer Twin.

This amplifier was incredibly heavy and built to last.  I recall dropping it down a flight of stairs and would invariably come crashing down off its stand (chair) when we was 'rockin', with the reverb making a hell of a noise as it landed on the floor.  Like all other muso's I carried a couple of spare valves but generally speaking I couldn't fault this lovely old thing.   The Bluey was superceded by the Croc Skin covered model during 64, (although it had been initially launched during the Autumn of 63 at the Music Fair in London) became a favourite of The Beatles and was used extensively during the recording of Revolver. 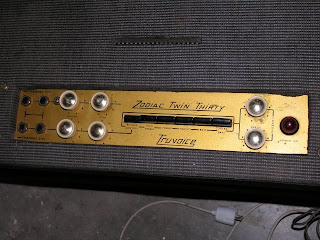 The Croc Skin model was now called the Zodiac and further, featured a glowing green light in the centre of the amp facia material which indicated the depth of tremelo effect being used.  Pretty gimmicky addition that didn't really serve any technical purpose.  The Selmer badge had now been moved from a small badge in the top left corner to one that spanned the whole width of the amp across the bottom.  Outside of the cosmetic appearance, the amp itself remained practically the same but now there was the option of a 50 watt model being available.  The controls changed little from the original ones.

It was only some years later that I moved on to Park amps (of which there will be a bigger article forthcoming) when 30 watts just wasn't enough to fill the places we were playing.  In fact most 30 watt amps became a thing of the past at that time.  I can't, for the life of me, remember what I did with that Selmer amp, wish I had it now.
It turned out during our conversation that John had owned a Zodiac up to two years ago when he
- THREW IT IN A SKIP!!!!!!!!!! - for our North American friends - a DUMPSTER!!
I can almost hear you guys fainting out there............I couldn't speak when he told me.   People in the States are scrambling to get hold of one of these wonderful amplifiers so please don't 'Do a John'.  Also the Croc skin amp appears to be favoured above the bluey.   Well listen you people, in my opinion you would be doing just as well to get yourselves a bluey, dont be a slave to fashion.  They are both seriously great amps.  One has different make-up, thats all.