APRIL - GIGGING AT THE WING WAH?

Hooray, Spring has sprung!! Oh the sun, aint it bostin', I can feel the vitamin D coursing its way through my delapidated frame making me feel like a frisky young thing again.
Spring in the Black Country, kind of evocative. Sedgetree experiences the aroma of the local glue factory mixed in with the background sounds of the council road works going on, priceless British pleasure. Giggin at the Wing Wah? well thats the name of the Chinese restaurant that used to be the Hen and Chickens, Langley, on the Wolverhampton Road. Normal gig for all the Brumbeat bands. When The Overlanders were at No 1 in the charts with 'Michelle' they played there for ten quid owing to bad management in not negotiating a contract that covered the likelihood of them entering the charts. 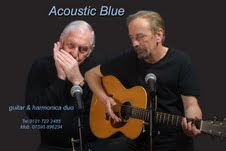 Acoustic Blue, who I mentioned a couple of months back, appear to be getting a string of gigs together and last month played at a whole load of places, unfortunately I wasn't aware of the dates but if you fancy a gander at this blues orientated duo they will playing at The Boat Inn, Cathriene de Barnes, Solihull on 4th of April 8.30 -10.30. So why not go along, support live music but more importantly support the survivors of Brumbeat.

The Harmony H75 to 78. Harmony were once the biggest guitar maker in the world and produced many a model but the H75 to 78 model was their flagship instrument. Twin cutaway Gibson 335 style guitar finished in a nice natural honey sunburst (H75) - the H76 was identical but had a Bigsby trem arm. This was followed by the H77, the only difference from the 75/76 being the colour - red sunburst with the H78 having the Bigsby. OK, the fact is, it's not a Gibson and doesn't have powerful pick ups but it sounded just beautiful and mellow and was probably one of the best guitars for a good rythm sound that I ever came across, there were lots of buttons and bells to hone the type of sound you wanted from it. This guitar was extremely light and comfortable to play 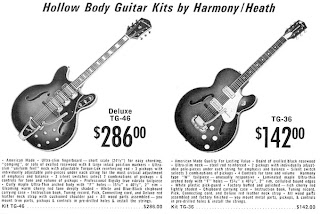 In America you could even buy it in Kit form with the guitar body itself prebuilt and you did the rest, mounting the pick ups, tremeloe etc. For some reason this make of guitar never really got the sort of credit I believe it deserved as an all rounder. These days, if you see one for sale, buy it my friend, it's the guitar to have. I can think of three Brummie bands who used this here geetar'. Another BRUMBEAT band who also used it were The Fugitives pictured below. 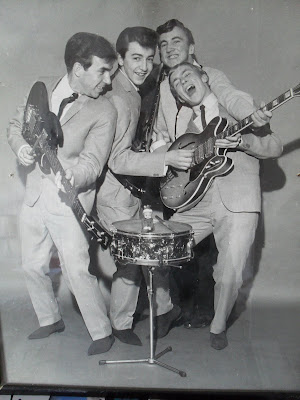 Thanks to John Parish (second left) for sending me yet another great photo. The Fugitives were from the Solihull area, formed during 67/68 and played many a gig at the Solihull Civic Hall even once supporting Gene Vincent. They were also a band that worked for Ma Regan. Sporting their tailor made suits from Jacksons at 12 quid each they must have looked the Biz on stage. This picture tells a story or two, though you may not think so at first glance. There were two more members of the group who were not in the shot!! the other two being a guy and girl singers. It makes you wonder, why take a photo without them? Well I'm sure there was a perfectly reasonable answer to that. The photographer did the usual trick of glueing them all together in that well practiced group pose.

This picture also belies a certain resentment of one member within the group to conform. Close examination reveals that they had great gear and wore nice suits but there was obviously some disagreement about the suede winklepickers (that could have had your eye out). A closer look reveals that the guy at the back, I imagine the drummer, was making his own statement by wearing black chisel toes. There's always one!!

BULLS HEAD BOB SEAL OF APPROVAL - AND THE WINNER IS:

Outside of the Gang of Four at the pub, I have a couple of friends who I speak to regularly about music and through conversation, give me food for projects. One who was a key player in the Brumbeat days and knows everybody, the other, a likeable music guru who lives on the edge of a forest and shall be known as The Skiffle King. It was he who asked me what I thought about the Bob Dylan Theme Time Radio Hour, broadcast by XM Satellite in the States and good old Blighty by Radio 6. "Are you bonkers?" I asked, "Bob Dylan DJ-ing!!, Do me a favour". Well he did me a favour and now I'm going to do one for you.

I have not been so impressed by a radio programme for years and years. I have been glued to the contents of this radio show and really recommend it for you guys out there, if you haven't heard it already. It's a real gem and the show revolves around a theme every week i.e. Girls Names, Cars etc.. featuring some incredible tracks from way back until today.

Dylan himself entertains between tracks with an engaging and informative air that has you fascinated with this archive of music history. He is often comical and of course his own knowledge of the music business is to the fore. The show aired from 2006 to 2009 and features 100 hour-long shows. This is a serious collection of music that, for those who love the music business, should listen to. The stories of how some of these songs were written are eye opening and there is no doubt that this show has the BHB Seal of Approval. Listen Now!!! Should you not be able to find this anywhere contact me at the usual address and I will assist.

I'm sure that, like me, you have been reading the papers which feature the sex scandal surrounding the Catholic Church. Not amusing in any sense but I would have thought the Editor of The TIMES would have thought twice before giving the 'by line' of the story to reporter "Roger Boyes??"

It's coming up to Easter so buy an extra bit of chocolate for the lady in your life. Lucy is getting my donation first thing Easter Sunday, back ache permitting!!