THE GREAT GUITAR SHOP DEBATE.......
It appears that I ignited several memory threads with the report on the friendly Music Exchange at Stirchley with some of our readers and here are some of their missives from the electronic post bag for your delight. Let's start with one of Brums finest guitarists:

DAVE BALL:
"I was working at Yardleys at Snow Hill in 1965 - actually in the drum department with Barry Clements and later Johnny Haynes when the guy from Kay Westworths tried to get me to leave and work at his shop for the sum of Three pounds four shillings and sixpence a week but I said no because I was already getting Four Pounds and Ten Shillings working for that annoying bugger Charlie Hewitt at Yardleys. Should have taken it really because Charlie sacked me soon afterwards because I wouldn't go home and change into a suit 'I'm not having you here looking like an imitation cowboy, go home and change or pick up your cards" which I did, pick up my cards that is..............." 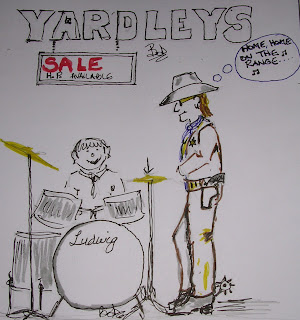 "Y'know WASP in Hurst Street, arrogant bloke**, first time ever in a guitar shop for me - charged me 15 bob for a packet of Black Diamond strings cos' I didn't know what I needed,

literally threw them at me, like he was doing me a favour. I never went back. **( I don't think that could have been Pete Oliver?)

Pop, the old guy in Green Lane Music sold me a genuine Tele croc skin hard case for about 7 quid.
Modern Exchanges, Modern Music in Dudley etc. Those sort of shops full of old Hofners, cups of tea and freindly advice are long gone now which is a shame really. I think the last was Green Lane Music who were open near Bordesley Bridge for a bit, last time I saw it open (around 1995) I bought a fire damaged Fender 2 x 15 Bass Cab for 65 pounds and the bloke even put it in the car for me, still a good un' now................

KEN REEVES on JONES AND CROSSLAND and BO DIDDLEY

I remember when Bo Diddley was on tour with the Everly Brothers. Amongst the guitar shops we frequented was Jones and Crossland (the old small one by the pie stand) - well we were in there chewing the fat when in came the man himself along with Phil Everly. Now until that time I'd only ever heard 'that' riff he made famous and which he sang everything to!! After a while though and introductions made, Bo starts picking up guitars and demonstrating his skills - bloody hell, could he play. I think the shop was then shut whilst we all jammed in a sort of master class. What a great guy, great shop and Great times..................

BACK TO THE BULLOCKS
Well it's been a quiet month for me. It seems, like me, everyone is either on or just got back from their hols' where they are probably recovering financially from the lavish upgrade expenditure to their "Executive" holiday chalet at Butlins - (that means it's not quite a gardeners potting shed). That being the case, and in line with the topic of guitar shops I thought its as good a time as any to feature a couple more old and interesting guitars etc....... I could look at them all day myself

I thought you might like to see this old peculiar thing as I featured the Meazzi amplifier a couple of months back. I find it strange that it lacks the sort of styling that you would normally expect from an Italian guitar,. I have absolutely no idea if it sounded any good....any advice? Looks real shitty to me.........kind of reminiscent of those Japanese Teisco monstrosities.

. Now, for those of you who recall the 'pre amplifier' days, you will remember this beauty with much affection. You could also buy this model with a rudimentary pick up and scratchplate combo fitted but I think this basic early model looks a real stunner. The 'F' holes are reminiscent of the later 'slashes' used by Rickenbacker and Antoria - although, I could be slightly wrong there as Framus may have copied the idea from one of those other makers. There were several other Black Rose models later on including a three pick up semi solid. ...............I think Johnny Neal's guitarist used one of these when they first started rockin the city.........

OK folks, enjoy whats left of the summer and start saving up for your winter heating bills, it appears that the energy companies are gathering in YOUR money now to pay THEIR Christmas bonuses. What's the country coming to.......they should spare a few thoughts for the elderly pensioners who will freeze to death this Christmas. Well at least they will be happy in the knowledge that Gordon, Tony and Pie Man Prescott will be lounging in luxury - not giving a shit.

Just going down the 'cut' to drown me'self.