Hello Brummies, Brummie Muso's, Knackered Old Sods from the 60's and fresh faced youths from around the globe hungry for snippets of how it was in olde Birminghame when you could pay cash for a bus ticket or go to the heart of the Irish community in Sparkhill.

Well not a great month for Villa supporters like me and now I will have to put myself through yet another year of torment.   Is it all worth it I ask myself?
probably not is the answer.   So lets get onto my:-
LITTLE RED KNOB
Some folk might accuse me of using this months title as nothing more than 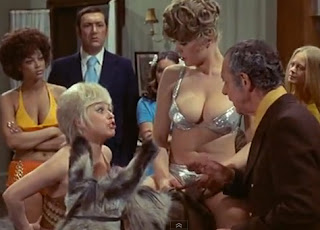 sensationalist innuendo, appealing to the dark, crude people of the night, lusting after various and sundry delights.   In fact I can hear one certain person right now tutting at my use of "Carry On" style gutter smut as an enticement to read this monthly delivery of assorted fiddle-faddle.

It all started way back in the 90's when a bloke who lived around the corner called me in and asked me what I thought about his small red knob, followed by an invitation to pay him 120 quid for it!  It didn't look very much to me but after I'd played with it I knew I wanted to play with it again.
I was a bit broke at the time and thought I could offer him a hundred.  Although it was tiny, I soon found out that, after some manipulation, it grew and filled quite a large space.  When I got home I went straight into my room and played with it on my own at every opportunity.  Others I knew had sneered at it and my band actually laughed when I pulled it out at the practise room. 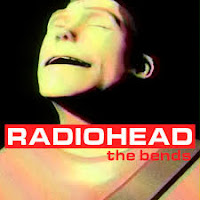 However, a couple of years later, in 1995, Radiohead recorded The Bends, surely one of the finest pieces of music ever, haunting quirky lyrics from Thom Yorke and vicious, snarling guitars from Johnny Greenwood. Nobody knew at the time but Johnny had a small red knob too!!
Once it became common knowledge that me and Johnny had little ones life suddenly changed and I found myself being hailed as Mr Joe Cool with my previous detractors now filled with jealousy at my little red knob. 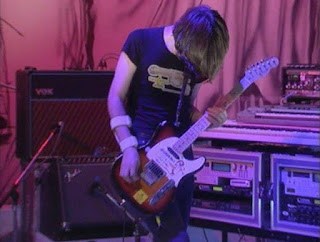 just the same as mine seen here in the picture underneath his VOX AC30.

All the Fender amp purists will be gagging and spluttering as they battle to get their heads around it being a solid state amp, that is, transistorised!
There is just so much elitist bullshit that I can take about it being necessary to have an amp full of valves.   I have a valve amp thank you very much, a Laney VC30, nice little number that cranks out a good volume and has some bite to it that I bought on a whim as it was a Brummie amp.
It is the amp I use least though.

So, I too have a Red Knob Studio 85 which I love and have used for gigs in smaller venues and principally, recording.  Here it is: 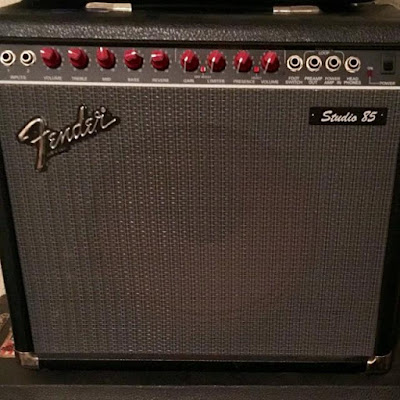 I love this amp and thought about looking for another that I could link together so I could use it for bigger venues.   It is equipped with one 12 incher and is really around 65 than 85 watts.

It is fortunate then, that whilst perusing the web I came across a bigger solid state red knob amp that would fit the bill perfectly.

The model is the Fender Power Chorus with 2 x 12 inch speakers and 130 watt output. It can be a real risk buying a second hand amp off the net without trying it out first, something I don't really recommend under normal circumstances.    However, the amp was advertised as having the same owner from new and had been used in the house only.   Normally a statement like that has to be taken with a large pinch of salt but upon examining the photos that were available I could see that there was not a single blemish on it.  It came with the user manual, and still had the Fender check tag attached to the mains cable.
BOBS BIG RED KNOB 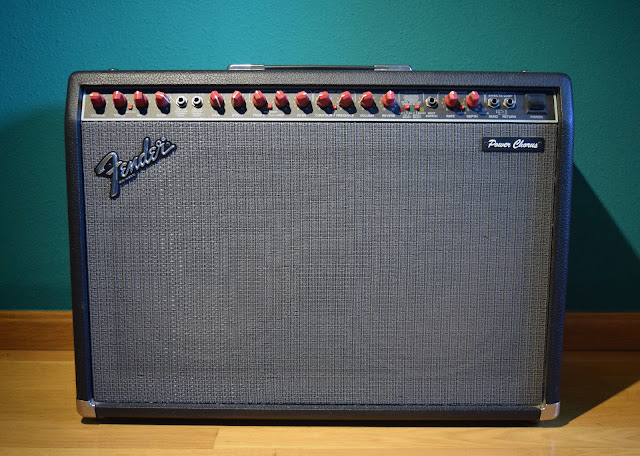 Here we have it, apart from a tiny snag on the speaker grille, it is in mint condition.

I had previously investigated several sources about this amp and found that it is built with 2 separate amplifiers, both the same as the one in the Little Red Knob!!  One clean channel which can be used for electro acoustic and one with overdrive.  It was built to challenge the Roland Chorus amp which was a great favourite of the time.   It was the last range of amps designed and manufactured in the USA at Lake Oswego, Oregon, in 1998, thereafter fabrication was moved to China.  The best of all it was 160 pounds!! 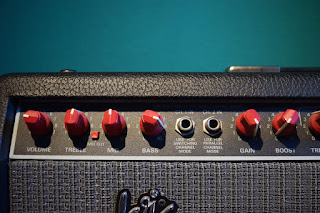 It is a true stereo amp with a clean and driven channel that can be mixed together to give you a massive range of tones and is equipped with a Chorus application too if you have a fancy for some wobble to your music!.
The USA models have LO before the serial number. 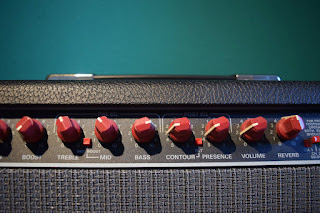 It is very LOUD and easily usable for gigging.  It came with the original four-way foot switch which is a most sought after piece of kit in its own right and, if you can find one, you will have to pay around 50 or 60 pounds for one in a shabby state.

Furthermore being solid state makes it a whole lot lighter than the standard Fender Twin which weighs in at 100 pounds. 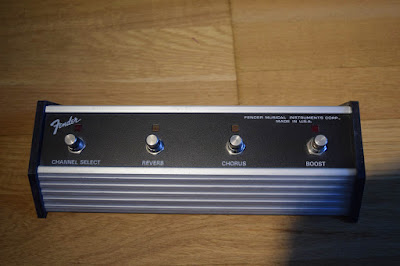 My old friend Roger Hill had a Red Knob and he knew a thing or two.

I can't tell you the amount of times I have come off stage and received comments about the sound I get.  I never mention valves but I do smile a lot.


I am extremely delighted with this amplifier and know how lucky I was to find one in such a beautiful condition, there isn't even a scratch on the foot switch!!
Now all I need to do, apart from enjoying playing through this, is to wait for some other well known guitarist to record some classic piece of music with his Big Red Knob and I'll be quids in.


So "Stop being a snob, Be like Bob and get yer hands on a little red knob"

MEAZZI CONTINENTAL WITH GUITAR CASE AMP
Well here's a stonker for you, as you know I lurve Italian style and this time its style in a box.

Currently on sale on EBay for a couple of thousand pounds is this gorgeous 1963 Meazzi Continental offered in "Collectors Condition" and not only is it a great looking thing but it comes in a guitar case with built-in Meazzi Metropolitan amplifier (not working). 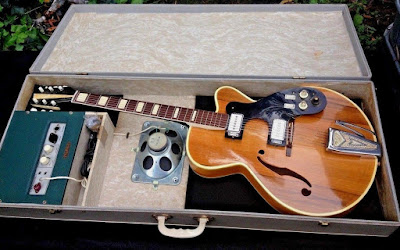 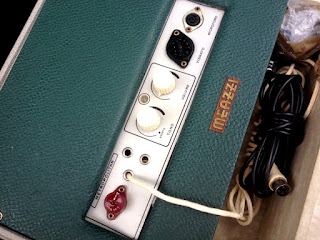 I imagine that it would sound pretty poor but back in the day this would have been a great thing to own.  I love it to death but not Two grands worth of love but someone out there might want it that much.   Lucky shopping!!

DEADLEGZ CHARITY.  ROB OLIVER
I reported last month a sterling effort to raise money for a couple of charities by Rob Oliver and a couple of his pals.  They undertook a gruelling bike ride from Lands end to John O groats and have, so far, raised over 12000 pounds. 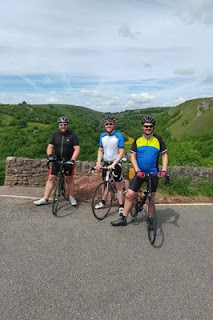 This is not a one-off, Rob and his mates have done a yearly challenge to raise money for and increase awareness of those who maybe suffering from some disadvantage.   Great result you guys and I know just how proud Pete Oliver would have been with Robs dedication, a lesson to us all.    I'm sure that you could probably donate a little more if you wanted to through the Deadlegz web site.

FINALLY
"Didn't it rain Hallelujah, didn't it rain".   By the cringe, Birmingham has never seen rain like that before.  I could have gone swimming in the River Cole and it was over 60 years since I'd been able to do that.  It was good for my enormous Hollyhocks though!!   Oops matron!!!


Take Care of each other you people,