Hey Ho! and a Happy New Year to you all!!

Many thanks to all those who took the time to write and wish me a Merry Christmas, much appreciated!!  As mentioned in the last blog, my aim this Christmas was to get myself a new guitar, well 'new to me' that is. Three years ago I bought myself a new Fender Squier Classic Player Telecaster for Christmas and I wasn't disappointed with the guitar itself, especially the neck action, but it's budget electrics were and still are, soddin' useless!

I bought the Tele with the aim of using it as a spare for gigs.  The problem being is that if you are playing, for example, a Les Paul with it's powerful and vibrant pick ups, and then you break a string and need to change your guitar, any sound balance that you may have established with the band or the balance established by the venue sound engineer will be totally destroyed by using a guitar with pick ups that have only about a half of the power and potency of Gibson Humbuckers.  So whilst the Tele is fun to play in isolation, it is not acceptable for stage work in my case. 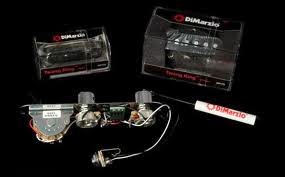 friends Squier Tele a couple of years ago and the sound difference had been dramatic and very pleasing but the upgrade is still quite expensive.  So after much thought about the way forward I decided to keep the Tele just for recording and to look out for a different spare guitar for the same amount of money it would have cost to buy a better set of pick ups, if possible, a real personal challenge!

LET THE SEARCH BEGIN. Here's what I did.......I sought out the cheapest set of DiMarzios I could find for sale, (165 pounds) and allowed myself the same amount of money to achieve my aim, not a lot of money for a guitar I think you'll agree, so this was going to be quite difficult.   I immediately eliminated Epiphone and other budget guitar brands from the search because their electrics are just as crap as the Squier. It was plain and simple second-hand bargain hunting for me!!!

I had spent days and hours cruising through Ebay,local Free Ad papers and all the usual haunts but was really not getting any further forward.  I would spot something with possibilities only to find out that there was a problem with the instrument, or the electrics!!  Still, undeterred, I had the idea of looking across Europe to see if there was anything going there, I tried Germany and indeed there were a lot of probabilities but none of them would post outside of Germany.  So, then I moved on to Italy and Spain and, as I was looking at some beat up old relic, a new entry popped up on the screen.......like a bolt of lightning, there in front of my eyes was a solid body Gretsch Electromatic going for the Euro equivalent of 125 quid.  Small bodied like the Duo Jet/Les Paul with apparently no dents or dings, so despite the distance between us, I was on the phone like a hairy bear. 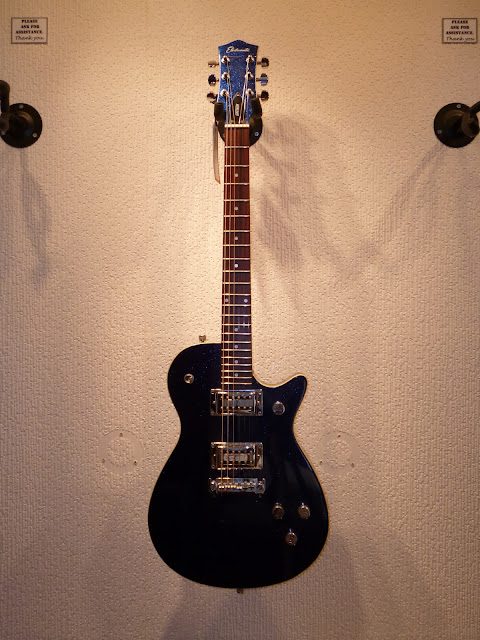 I was dreading the answer at the other end because I can only speak two languages, Brummie and Bollocks, but the bizarre thing was, when someone answered the phone, it was an English guy living abroad, what luck!   After a short discussion which also included some begging on my part, he agreed to send it to me for 40 euros more.   Unbelievable really, the cost of postage and the guitar came to slightly less than my budget by a couple of quid.

GRETSCH ELECTROMATIC
Sometime back I wrote a piece about the Gretsch Corvette saying how much I liked the original Corvette and how disappointed I was that Gretsch had then covered it in glitter and called it a Princess and other unacceptable names like that!!  The guitar I had just bought is unfortunately in Dark Blue Glitter but at least it's a dark colour.

I had tried a Duo Jet way back in 1966 but at the time I was wailing the blues and it's sound didn't cut the mustard, compared to my SG Standard.  Gretsch were too middle of the road for my liking but, on the plus side, they always exuded an air of quality, a bit like Guild.

The one fantastic thing Gretsch did do though, in their efforts to get into the solid body market, was to take their great Synchromatic electrics which featured on all their great models and stick them on a quite average solid body guitar, which is not brilliant in the choice of wood, but of course the whole thing about an electric guitar in a Rock band is it's amplified sound.

The guitar duly arrived and when I examined it, it was indeed scratch and 'ding' free, there was loads of dust around the bridge area and headstock, as though it had been standing in a corner for years unplayed.  The pick up selector switch didn't function too well but my electrician mate gave the switch a squirt of connector cleansing fluid and everything was totally fine, I couldn't believe my luck at finding this little gem.  This guitar was made in Korea, it's weight is pleasingly light, it's well put together and I was very pleased to find the controls had a sturdy and substantial feel to them, unlike the Tele.  The neck felt slightly slow but the application of some polish soon fixed that.

I was amazed too when I plugged in to my amp and gave it some volume, this little thing has power in spade fulls!!  It was then that my mind wandered back to doing some gigs with the Small Faces way back in the 60's and remembering just how cutting the sound of Steve Marriots Gretsch had been and he had used several different Gretsch models.

Am I happy? you bet your life I am!!   It took me some time and a lot of diligent investigating but I have ended up with a great Gretsch guitar for just a little money, so if you're in the market for a new instrument get looking, it can be rewarding and fun too.  I read in some Guitar Forum that the Electromatics were 'Wondrous guitars'......they are, it's a fact.

I hope some of you guys got something special too over the festive season..... I now sense a bit of Bo Diddley creeping into my soul, "Lucy grab yer' Maracas"..... 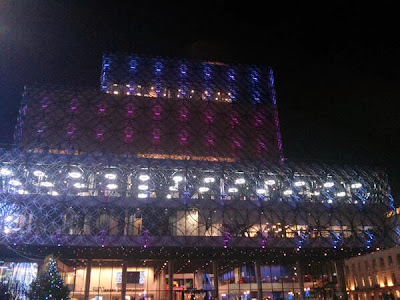 Birmingham City fans are incensed and are demanding the Library do the same for them, if they only knew what a book was? let alone a library!!