BOB HANSON.
I think one of the first Brummies I ever saw who could actually play the guitar 'properly' was Bob Hanson from Yardley Wood.   In those days Bob had a Hofner V3 which he used with a Watkins Dominator and copicat echo chamber.  He was the lead guitarist of The 'Rockin' Dextones, and they played all The Shadows and Ventures instrumentals as well as a smattering of vocal hits, as was the norm for the day.
I was recently informed by Bob Styler (Yamps/Traction) that Bob Hanson
sadly passed away on 16 Apr 2012 following a heart attack.

EARLY SPARKHILL DAYS
Bob Styler - "I used to see Bob with The Dextones nearly every week at the English Martyrs Youth Club at Sparkhill and some other local dance halls, they were a good group for their ages and were well liked.  I think Bob was a kind of local role model for the younger guitarists too.   I had recently been playing in a band with Bob, I'd gone almost full circle and ended up with one of the first musicians I'd known.  Bob had a really nice touch to his playing and I'm sad that he's no longer with us but glad that we got together". 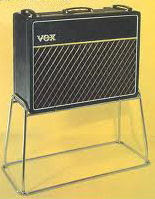 In the early 60's I was chatting to some other guitarists in a city music shop.  We were told by the owner that Bob Hanson had just bought a VOX AC 30. To own an amp like that was a big deal in those days and myself and two or three other guitarists immediately took the bus from Birmingham City Centre to Yardley Wood.  We turned up unannounced on the doorstep of Bob's family home and asked him if it was true that he had a Vox and could we see it?

We entered the living room where his parents were watching TV.  I remember the room seeming quite small (probably because it was full of spotty youths) and there, taking pride of place, almost like a sideboard in any other home, was this beautiful Vox amp with it's own cover and standing on it's silver Vox stand.  We guitarists (and Bobs parents) all gathered around it, Bob took off the cover and we were all Oh!!-ing and rabbiting on about the gold VOX lettering, the controls, the inputs and 30 Watts!!!

We were clearly captivated by it.   Bob was all smiles and was now sporting the proud look of someone who was truly superior to us all. "Turn it on Bob!" said one of the guitarists - "No sorry, you can't hear it" came the reply.  "Oh go on!!" we all said "No, you can look at it but you can't listen to it" - we left the house still excited, jealous and a bit disappointed that he wouldn't let us hear it.  Of course, the clever thing was that, by not turning it on, we all went to see the Dextones next gig to see and hear the amp in action - it and Bob were great, he looked to be in guitar heaven.   It wasn't long before he got his hands on a Stratocaster to complete his desired sound combination.

Shortly after this event my life took a different direction and sadly, I never saw the Dextones or Bob Hanson again, nonetheless his diligent approach and serious dedication to the art of playing the guitar had a direct influence on me and made me work harder to get better.  I remember being impressed by him playing those instrumentals note-for-note, delivered with great pride in his ability and of course his 'gear'.  I'm pretty sure that I wasn't the only guitarist in that area of Brum who saw Bob's meticulous playing as something to be admired.   So though it's a little late, "Thanks very much Bob".

The Dextones, like so many other groups of that day never set the world on fire but were truly representative of the sound of the early 60's when groups ruled the waves.   Bob Hanson's story didn't stop there though.  He continued to do gigs with various groups and musicians such as Johnny Neal and Mel Stanton at midlands clubs right up to his passing and although he never 'made it big' as a musician he remained true to his art and you can't really ask for more success than that.

My sincere condolences go to Bob's family and friends. 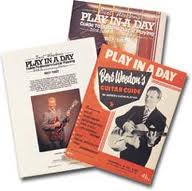 Well he wrote the greatest book on learning how to play the guitar for novices.  Bert Weedon passed away at the age of 91.   More of a Big Band guitarist, Bert Weedon was what we might call 'middle of the road' in his choice of music style and though he was influential for some musicians he was considered too 'straight' for others.  His fame arose at the same time as Joe Brown and Hank Marvin but Weedon didn't have the youth appeal that the other two younger guitarists had and he kind of got left behind, although he had a good career.  I recall him being on a TV chat show and he said "I'm now going to play a thousand notes in a minute" or something very similar, off he went, Diddle-iddle-iddle-iddle for a minute, I don't believe that anybody really bothered counting how many notes he played but that style caught on with a few guitarists.   I last saw him at a 60's event about 10 years back and he was still playing Hava Nagila and Guitar Boogie Shuffle.

THE LADIES SECTION
News clips from around the Globe
Sinead O'Connor has cancelled her world tour!!.....didn't know she was doing one, but myself and the Gang of Four would like to say "Thankyou Very Much" to her on behalf of the whole world.

Men are set to live as Long as Women.   This report in the press has brought sharp criticism from the BFC (Brumette Feminist Collective).   A recent statement from the Aston branch of the Radical MSL (Men are Shit League) said "This is just another example of a womans right to exist longer than the enemy coming under attack.   There is concern amongst the Sisters that DNA is being manipulated to give men the equal hand, and that is just not fair?".

Groupie Accidentally Sleeps With Bass Player
This article was published in 2009 in Kentucky.   Gang of Four member
'Mouse' brought it into the boozer for us to read and we thought that it
only right that this should be treated as a word of warning for all concert going, female music lovers.
LOUISVILLE, KY – The day after 'The Academy Is' were in concert, Victoria Jorgensen, 22, was terrified to realize that she had accidentally slept with the band’s bass player – mistaking him for someone important in the band.
“I can’t believe how stupid I was,” said Jorgensen. “I mean, I went up to the guy and was like ‘are you in the band’ and he was all like, ‘yeah, I’m in the band’ so I did him. Then this morning I was telling my friends and I realized he was just the bass player. This happens to me all the time.”

Jorgensen plans to do more research before sleeping with another band member.  “This won’t happen again,” said Jorgensen. “If I’m going to sleep with someone, they’d better be important. I mean, I could find someone here in town as important as a bass player.”  Adam Siska, 'The Academy Is' bass player, was unavailable for comment. 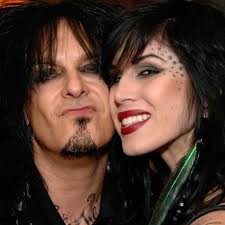 Wow!!, the air here in the bloggery is electric with joy at this first issue of The Ladies Section, or as Kat Von D, that well known entrepeneur, tattooist and apparent liker of 'the older bass player' would say "I'm really stoked!!"  Go Kat Go!!!!!  She's a brilliant artist and I don't think she's from Kentucky?

WE ARE ONE?
It hasn't gone un-noticed by yours truly that Birmingham Feminists now appear to be sporting the old logo I once emblazoned across these here cyber pages, or is it sheer co-incidence that we both 'borrowed' it from the Chicago Bulls.  Could be a sign that I'm delivering the kind of information into that niche market sector that the ladies deserve. 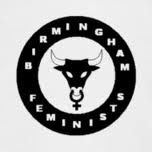 I have to say though, I am an egalitarian so cannot support their claims to be the Master Race, oops! I meant the Mistress Race.....No, not that either!!  I meant a sort of homogenous, sexually indistinct human group who have the right to complain about men.  Whew, that's better.
It's so easy to trip over one's use of words these days.

COMING SOON:   "Celulitis in the Sixties" - Was it noticeable in the back of a Ford Transit?

THE 'OLD KIT' BIT.
WATKINS - WEM 'HALLE CAT'
This rare piece of Watkins kit was a four channel mixer combined with a 4 Head, copicat type echo and separate reverb unit.  I imagine that it was primarily designed for PA vocal use.  Presumably it was called the 'Halle' cat because of giving a concert hall style reverb sound.  I never saw or heard one in use to my knowledge, and only saw this model being sold on E Bay some years ago.   I don't know how efficient it was, reminds me of the controls that we used to see on Joe 90.   Perhaps someone out there has some more info?? 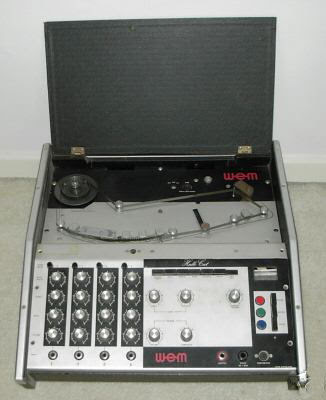 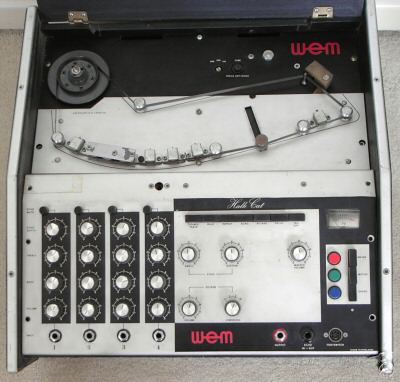