"Oh Bollocks" I thought when I heard the name of the featured band here this month, "Another soddin' tribute group". You can imagine my great relief at discovering that this group are a "Proper Band" with a rich musical heritage and a great set list. The following picture nicely depicts the band in action, reminding me of the saying that "If it looks good then it probably is"
THE TRAVELING PILBURY'S 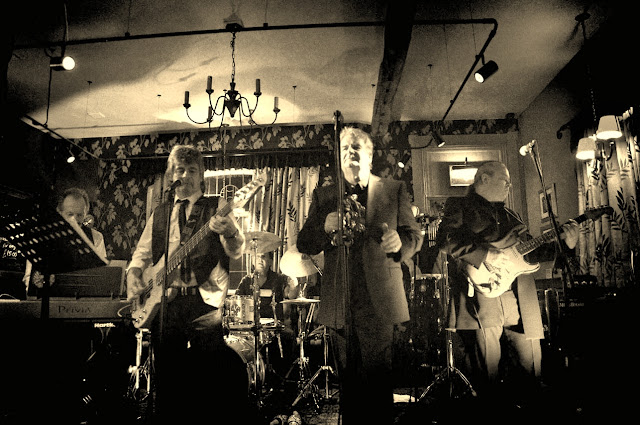 .....and they certainly look good together. All of these guys are very experienced musicians with far too many connections to other 'Name' acts to mention and, not being one of those sort of people who believes that fame by association is relevant, I shall not dwell on that subject other than to say, you have to be good to play at a good level.

In the mid 60's you would have seen vocalist John Kerton fronting The Andicaps, drummer Rob 'The Stick" Moore with Paradox and later, during the colourful, whirlwind days of psychedelia, with Ochre Daydream which also included Pilburys pianist Steph Griffin. Bands of the 60's worked hard

and regularly, in competition with other great bands, honing their musical skills with each performance. That experience is never forgotten.

The Pilburys set-list is a great mixture of songs that embrace their individual musical backgrounds from out-and-out rock and roll to some soulful classics like 'Handbags and Gladrags' with it's beautiful piano intro and the brilliant Ray Charles song "Unchain my Heart". It takes years of experience to play that particular song well and

benefits from their mature approach allied to great vocal skills.

Naturally the music of The Beatles feature, giving the band an opportunity to show off their harmonies and the set also includes a couple of tunes of Brummie origin reflecting their associations of the past. A real well rounded show. I want to be entertained when I go to see a band and this set list, played by good musicians delivers in spades.

Their coming together was prompted when Jake Commander, former lead guitarist of The Andicaps visited the UK from his current home in West Virginia 3 years ago for a short stay and some former Andicaps members and other musicians met up to reminisce and to have a bit of a session.

When Jake returned they saw no reason to stop playing together, Bassist Graham Savage says "We sounded good and the lure of playing music together was as strong as ever, the only changes in the line-up since that first session have been with lead guitarist's but once Tony Cook came into the band the sound really gelled".  Tony had given up playing but jumped at the opportunity to play with Rob Moore again, having previously been in the same group, namely Dickie Heart and the Pacemakers.

They played a couple of gigs for their own amusement but found that the demand was there and since then work has come rolling in, including a Butlins 60's festival.

John Kerton said "Playing in a band again was the last thing on my mind but when I heard how good we sounded it was just impossible to avoid, it's in the blood".  He's absolutely right, the music these guys play improves with maturity and experience.

They were all sort of reluctant to get involved with a group again but now the most important thing about this band is that they are really enjoying playing music together and that feeling always conveys itself to an audience. Go and see them or if you're a promoter, get a hold of them now, you won't be disappointed. 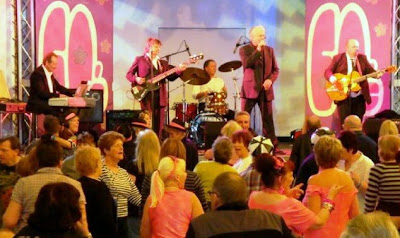 To find out where the Pilburys are playing OR to arrange a gig contact Graham Savage at grahamsav@GMail.com or view the band's page at www.myspace.com/travelingpilburys

I have to admit that I know/knew two or three of these guys, although up to now they didn't know that.

THINGS THAT ANNOY ME - PART 355, TRIBUTE BANDS.
Amongst my many hates, which with every passing year seem to be growing in number, are 'Tribute' bands.  They come in all shapes and sizes and, more often than not, are usually absolutely dreadful. I can't see that playing someone else's songs badly is a form of tribute to anyone or, EVEN WORSE, intimating that they are the rebirth of a band whose name they're a parasite to, by inserting the word 'New".

Is there a Brumbeat relevance to all this scorn, quite simply "Yes".
If you wish to amuse yourselves for a short while, why not visit The 'New" Applejacks here: http://youtu.be/SuSTju38USw Always good for a cringe!!


The female bassist who is the 'New' Megan Davies has a real talent for
"Oo-ing" in the sort of flat dirge vocal style that we only come to expect from  the likes of Bananarama.   The 'New' Al Jackson looks like an old George Melly.  I notice that the comments panel has been disabled, I wonder why?

We here at Brumbeat Towers seem to have a TRIBUTE WEBSITE too....that's novel eh?  Watch this space for future developments.

BOLLOCKS TO DENMARK!
To quote that well known Midlander, William Shakespeare:
"Something is rotten in the State of Denmark"
After a million years of importing their bacon and singing Hans Christian Anderson songs the Danes have repaid us in the most underhand manner
by banning MARMITE.....  What!! MARMITE??...Stone me, must be dangerous stuff! - If I'd have known it was THAT dangerous I would have tried to smoke it....I live life on the edge.

It is less surprising however when you consider that they also banned OVALTINE too.   They don't want their people having a good nights sleep..

GET WELL SOON
Brummie abroad, Graham Ashford (Brumbeats) has recently undergone a less than comfortable spinal operation and is taking it easy for a short while.  I wish him a speedy recovery.

and finally......
THE BLUES BLUES
Well I'm a Villa fan and like all Villa fans, I'm a fair minded sort of guy so it
was quite sad to see the 'other' team get demoted this season but we look forward to drubbing them again in the near future.

OK you guys, take it easy and be nice to each other.