JUNE - The Brumbeat Secrets of Hollick and Taylor

In my recent "In the Snug" interview with ex Moody Blues Manager and Producer Alex Wharton, as well as discussing the early Moody Blues and the recording of Go Now, we had talked about the second Brummie group he had some involvement with, namely Frosty Moses.  Frosty had been formed by two members of Birmingham soul band, Traction, in the form of Danny Gallagher (Bass), and Phil Savage (Vocals) who wanted to move on and  leave the Soul environment.  "We went to London and recruited guitarist Gerry Earsden, who was playing with Phil Collins and a couple of weeks and one drummer later we got his brother Maurice who was the drummer in a band in Northumbria to join us".  Mick Lavender (Hammond organ) came to us from a local Brum band Rum Bak Shush".  The group decamped to Wales to 'get it together' and record a demo tape of their material.  This tape found its way to many London agents/Labels and eventually onto the desk of Chris Blackwell of Island Records who gave the band their name during a visit to his office one day. 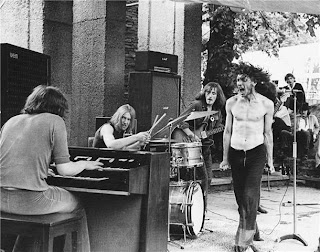 Frosty Moses 'givin it large' at Cannon Hill Arts Centre.
They had emerged as a force during the early progressive rock phase having quite famously, blown King Crimson off the stage at the best gig in the 60's bar none, 'MOTHERS' and were tipped for great things. Several agents and management companies were interested in the band but Alex Wharton had made the journey up from London one night to see them live at 'MOTHERS' after they had been recommended to him by Kenny Everett, he had first seen and signed The Moody Blues at this very place  a few years before.  He was knocked out and signed them up on the spot.  The much loved, Phil Myatt also became involved as part of the bands management.    It appeared that the future looked positive but this group narrowly missed being thrust into the world of the big acts owing to problems involving their financial backer.  Despite having a good fan base in Brum and London and some respect from other bands too, Frosty Moses disbanded shortly after the recording of this song.

It came as a nice surprise then to find that Alex had recently discovered at his home, the acetate from the session he had produced with Frosty Moses that never got released.  The song title was 'People Say' and had been the bands opening number at MOTHERS the night Alex went to see them.   Despite being recorded all those years ago the acetate was in surprisingly good condition.  "I have sent the disc to ex bassist Danny Gallagher as I felt it should be with the guys who wrote it" Alex told me recently. 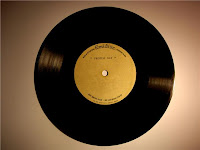 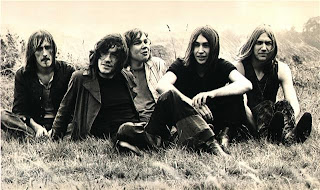 I listened to the recording and although it is in acetate form, it is produced in the same manner as Go Now, that is to say, with energy and has almost a live feel to it.  A heavyish medium pacer, opening with an unusually constructed guitar riff and is joined by a fabulous, deep and raw Hammmond organ sound growling away in there courtesy of Mike Lavender, who of course later collaborated with Laurie Hornsby for the Brum Rocked books, and it really has that 'late sixties' sound to it.   Although they missed out on the big time, it's nice news to know that there is something tangible of their past to listen to after all those years.
THE EXECUTIONERS
IS THIS YOU??
Not exactly in comparison with the Frosty Moses acetate discovery but to certain folk just as important. I was sifting through EBay and stumbled across another, more local, acetate of a band who, to my knowledge didn't reach those kind of heights?    THE EXECUTIONERS: 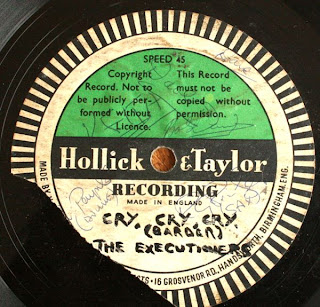 Now, every man and his dog went to the Hollick and Taylor studios in Handsworth to record demos.  Moreover, the first BRUMBEAT LP on the Dial label was also recorded there.  The Executioners, are a group I am totally unaware of but they, like many other bands, had gone to H and T to record this demo of a self penned number 'Cry Cry Cry' which was backed with the old Little Richard classic, 'Slippin and Slidin'.  I have listened to both sides of the single and the vynil quality of the recording is quite messy, but one has to remember that acetates are generally only good enough for about 10 plays anyway before serious degredation.  Music style wise, I would say it was recorded around 65/66'.  I did a little bit of detective work and found a quote from H and T studios actually mentioning The Executioners in a list of other names who recorded there, but nothing more. 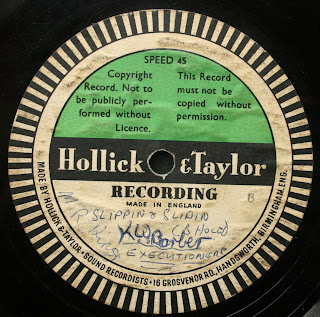 As you can see from the photograph it is autographed by, I presume, the five band members with the 'A' side being written by Keith Barber.  As it's signed I imagine that this was given as a gift to someone.  Was this you, or do you know any of the band members?  If you were one of The Executioners drop me a line.   The acetate sold for an amazing 173 pounds on 8 May 10 to a buyer in the States.  My thanks go to Pete Bonner of  Psychotron records http://www.psychotronrecords.com/  for his assistance in supplying me with the photos.  Pete is an internet record dealer from Birmingham who specialises in rare LP's and singles. He discovered the acetate in the Kingstanding area of Brum in 2008.  However, just because it was found there means nothing really, it could very well have been recorded by any band in the whole of the West Midlands.  If you're on the lookout for a special LP or disc give him a shout, he's very friendly and helpful.

I've said before that there must be some acetates gathering dust in peoples attics or basements.  Get down there and dust it off, I'd love to hear from you if you have one. 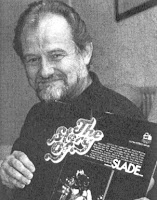 The site where I saw the quote from Hollick and Taylor and the Executioners was from the excellent web site, N'Between Times. N'Between Times, if you don't know, started as a book dedicated to the groups of the Black Country.  The book was a great success and it's author Keith Farley took the step of publishing the whole thing on the net rather making reprints, a great unselfish gesture.  I have visited the site myself many times as a reminder of some of the many gigs I did around the Black Country as well as Brum, with a variety of bands.  This comprehensive site was only realised by the hardworking efforts and enthusiasm of Keith and regrettably, I inform you that  in March of this year he passed away.  Keith was also the Chairman of Wolverhampton History and Heritage Society and his work and dedication in preserving the popular music history of the Black Country bands deserves to be recognised in some form or other.  We at BRUMBEAT offer our condolences to Keith's family, friends and fellow historians on this very sad occasion.  I don't know if there are any plans to continue the site at this stage but it is well worth a visit or two right now just  in case it isn't.   I loved the Black Country gigs.  Dudley Zoo,Walsall Town Hall, Wolverhampton Civic, The Woolpack, The Ship,  Bilston, Sedgely, Tipton etc...  Always good audiences there.  I'm sure that Keith will be missed by many, many people.

Well wasn't that exciting. To-ing and fro-ing, back door negotiations, I'll swap you two of these for one of those etc etc, just like the West Wing but with a cup of tea and a digestive. 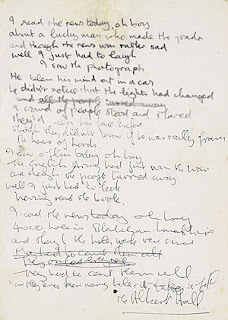 This month, coming up for auction on 18 June at Sothebys New York are John Lennons handwritten lyrics for A Day in the Life.  The catalogue price is set at 750,000 dollars but a million is probably on the cards I would think.  Interestingly, the lyrics don't include the two pieces of the song that McCartney contributed, namely the middle section "Got up, got outa bed..." and the controversial line "I'd love to turn you on" that resulted in the song being banned.  These handwritten lyrics had been the property of Beatles roadie Mal Evans and presumably he had retained them from an earlier session before the song had been completed?

I recall being at a party the night Sgt Pepper was released
we had just returned from a tour of the Welsh coastal resorts, deep joy, and about twenty of us were sat around on the floor, all trying to be the last person who could still hear the final piano chord from this song.  "Lying git" was the phrase of the night.


Hilarious really seeing as the sound was coming out of a Dansette
These days it's all I can do to hear someone knocking at the front door.

For fans of The Who, on 24 June 2010, Christies are selling the largest private collection of The Who memorabilia, including a Gibson SG circa 1970 used by Pete Townshend on the Who's 71 tour of the States. Estimate 20 to 30,000 pounds.

Its probably about time I started auctioning my handwritten lyrics.   Yes, here we are, "Gis a Snog Doris" a sad lament about a girl from Tipton who's thinking about making the big move to Sedgely to take a job as a supervisor at Sketchleys Dry Cleaners.  A real heart tugger....

"Friday morning at 6 o'clock as her shift begins,
Noisily slamming her bedroom door,
Leaving a note that says she's home at four
She goes downstairs to the coalhouse wearing her overalls...."

I don't know quite where I got the inspiration from for the song lyrics?  Anyway I'm gonna scribble em out on a sheet of paper and start the bidding at 34p.  I'll sign it if it reaches a Fiver. ' Must-Have Memorabilia'
says - 'Bulls Head Bob'  misjudged poet or just enigma!!

AND FINALLY......
So there you are then, lots of local stuff this month. Ah yes, I've added a Google search gadget in the side bar nowadays to save you having to leave the page to look for additional info should you feel the need to.

Hi Bob. I don´t know you and I wasn´t part of the Brumm scene in the 60´s. I was part of the Stamford (Lincs) scene at that time, until I left to come to work in Germany in 1971. On the first of every month I always go to the Brumbeat website so that I can read your blog...mate..if I may call you that..I find it always bloody interesting and full of facts and things I didn´t know about the Brum scene at that time. I hope you carry on writing your blog until you are pushing the daiseys up from down below..and maybe after that as well !!!!....please carry on, your "work" is very much appreciated by me and no doubt hundreds or even thousand of old sods who lived through those teriffic 1950´s and 60´s.

OK Bob..thanks a million for your blog.

Hi Bob,
I too am a fan of your style and have found things on this website that would have been lost forever had you not done some digging and published your results.

Titles are 'Home sweet home' and 'Just a wearing for you'

The 2nd record has nothing !

There are no marks in the 'dead wax' on either record to help either.

Is there any way to fill in the gaps.