August - Riders of the Storm

Some things in life look how they should look and you just know they mean business, for instance, the Supermarine Spitfire is simply the most sublime looking fighter aircraft ever produced, the iconic Jaguar E Type with its sensuous lines and sleek shape informed you, with one glance, that it was a thing of speed and beauty. A girl called Shirley, who could make the zipper on your trousers undo itself in the anticipation of the greatest shag of your life and lastly, in 1954 one mans vision produced the most iconic of guitars ever made and found a true partnership with:

THE FENDER STRATOCASTER AND HANK MARVIN. 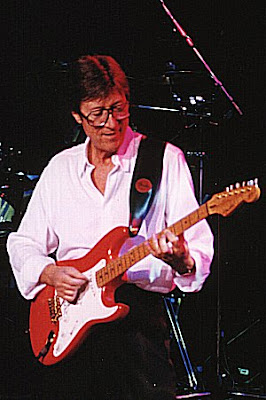 There is one thing for certain, in the early Rock days I, and probably all other guitarists in Brum would gather and stare longingly through the windows of George Clays or Jones and Crosslands at the first Stratocasters on sale in the City, a row of greasy nose prints adorned the shop windows in front of the display, freindships and groups formed at those very spots. Hours of conversation about the finish of the paintwork, which was just the dogs bollocks on those very early Strats. I remember, in particular, a natural sunburst model in a locked glass cabinet at Woodruffe's, it's futuristic shape and its great cutaway cowhorns were a thing of wonderment and you just knew that, if it was yours you would be as good as Hank B Marvin. Every guitarists hero of the day.

HANK MARVIN
Cliff Richard asked Hank what kind of guitar he would like to play and as history shows, his choice was the Strat. Cliff purchased one from America and gave it to Hank to use, reportedly the first Fender in the country. The guitar was not available commercially, in the UK, at the time due to an embargo on imports and us poor plebs had to settle for cumbersome semi acoustic things with an excuse for a pick up or some cheap Italian thing. To make matters worse it was almost impossible to buy an amplifier! Hank led us all in the art of the instrumental, the Strat combined with a Meazzi echo chamber and a VOX AC15 produced the 'Shadows Sound'. Hank was also responsible for giving us the AC30 when he asked VOX if they could make him a bigger model with two speakers. Another important factor to The Shadows sound being the marvellous rhythm guitar style of Bruce Welch, the master of chords and lightness of touch. It is easy these days, to forget what an impact The Shadows had on the music scene, yours truly was a member of their Fan Club and possessed all their LP's and EP's. As a matter of fact, every young guitarist who was about during their reign owes something to all those guys and their contribution should never be dismissed. These also include the greats - Clapton, Jeff Beck, Jimmy Page, Mark Knoppfler etc

One glance at this wonderfully styled guitar clearly shows it is designed with the player in mind. Beautifully contoured body that fits neatly into your waist, tremelo arm that was just the right length to enable you to use it comfortably, Hank used this to great effect and developed a playing style whereby he held onto the arm continously. It's three pick ups with a neat, well positioned, selector switch meant you could effortlessly, select different sound combinations. The bottom cutaway also gave comfortable access to the top frets which beforehand were simply unplayable. Even the positioning of the strap button on the uppermost cow horn meant that the guitar was perfectly balanced.

TONY RUSSELL
I was reminded about the virtues of this guitar again by BRUMBEAT veteran and fellow 'Stratocaster Window Watcher' Tony Russell who, like a lot of us served his dues around the clubs and pubs of Brum, including The Bulls Head, Carlton, The Station at Selly Oak etc from 1962 onwards, with The Stormriders, The Exchequers, The Couriers and Shingles. Tony then retired from the game and led a sensible life but, the longing to play again was just too much to resist and Tony now has an aptly named 60's revival group "Shindig"(although at present the group is 'resting' due to illness). As Tony says "When I was young I used to dream about owning a nice guitar and now I find I can afford more than one and some nice amplification to boot". (Tony top right, Brother Chris kneeling). 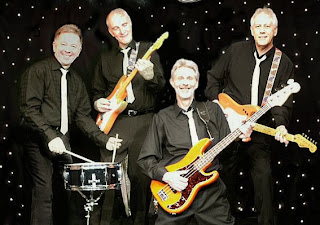 He and his bass playing brother Chris, are both avid admirers of The Shadows and they attend 'get togethers' with like minded Shads freinds for an occasional session. Tony owns a fine brace of Stratocasters, that is a Fiesta Red Hank Marvin Signature with gold fittings, a standard Strat again in fiesta red and a natural 'Classic Player' sunburst model fitted with 57/62 pick ups. He refers to his sunburst as his Buddy Holly Guitar, for obvious reasons


Tony, like Hank, has an awful memory for names hence the initials.

Tony really admires the talents of Bruce Welch and says "I still regard Bruce's part in The Savage and FBI as a real test of skill" and, of his Brother Chris, "He puts on a classy performance with his rendition of Jet Harris' solo part in 'Nivram'.

Its great to know that there are people who are still passionate for this style of playing with its precise notation and lush sound and I wish to thank Tony, Chris and all you Shadows fans and players out there for keeping that sound and those precious memories alive. Long may you Shadoogie!!

STRAT SNOBBERY. It makes me weep when people start to get 'Nerdy' about guitars, things like "thats a 1962 switch not a 58" like it REALLY makes a difference - "Its a shaggin' guitar so play it and stop gobbin' on". However, its incredible these days to see a 70's Strat described as something collectible. The only true Fender models stopped being made in 1965. To acquire a Strat of comparible quality you have to lash out thousands on a Custom Shop built model and is it a joke that people are forking out 850 pounds to buy a 'Road worn model"? That is, a perfectly ordinary Strat that has been pre-battered and scratched for you - it looks as though they've let some mexican peon loose on it with a soddin' angle grinder - if some people are stupid enough to buy it, they're definitely stupid enough to be conned out of their dough, just sheer lunacy. It is sad, in a way that todays budding guitarists will never experience that 'first sighting feeling' of a good guitar because there's just so many makes available.

If you want an authentic sound but can't afford a Custom Shop or original model Tony says his 'Classic Player' Mexican produced, Sunburst Strat " gives that vintage sound for under 400 quid", that's sound advice from someone who obviously knows his guitar. Thanks Tony.

THE BLACK PIG SAILED INTO THE SUNSET. Well another adios, to the writer of Captain Pugwash who died in July. No more Seaman Stains or Master Bates for us to giggle at!!

NEW STORE OPENING. Dudley, sorry Dudlae' has announced that a new toy megastore is being built there called "TOYS AM WAE"?

UPCOMING. I'm so-ooooo excited because I am currently talking to several Brilliant people from the BRUMBEAT days and can assure you of some exclusive, crackin' articles coming in the next few months, it's just too good to be true....somebody pinch me, Ooh, that reminds me of Shirley again - get down boy!!

What a great resource!