Well thank goodness that soddin' snow has gone. Takes me back to 1963, digging our way out of the house. Lucy said it was good thing because it has kept me from going to the Bulls Head to sort out the worlds problems with the Gang of Four, that is me, Nobber, Mick the Plumber and Crazy Malcolm. It was great to return to my drinking haunt however and after catching up on each others business, outside of drinking, we got down to the serious business of talking about music and specifically about bands that had a lasting impact on each of us.....I remembered these guys:


NOT REALLY BRUMBEAT BUT........... I want to ramble on about a 60's band from Coventry that some of you may not have come across but I had the pleasure of seeing, when we were on the same bill a couple of times, once at Yardley Technical College and the other occasion at The Rainbow Suite, in the city centre. You may say, "Come off it Bob, Coventry isn't Brumbeat", well I could extend that argument about bands from Walsall and Stafford etc that feature on the site already and this band definitely deserves to be mentioned several times on any site that is about good music. I am talking about The Sorrows.


I am not going to go into depth about them but they were a group that I have always been impressed by and was surprised when they failed to make it as big as they should have.

The Sorrows, for me, were like the midlands equivalent of The Yardbirds. Hard, resonating Rythmn and Blues delivered brilliantly. They had a few 'single' releases during the mid-sixties with the most memorable being 'Take a Heart' which was also the name of their subsequent LP released in 66. 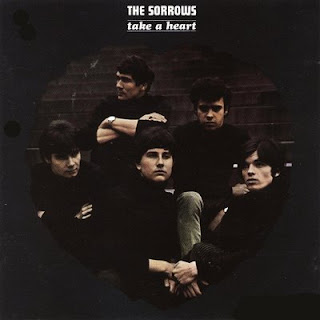 Fronted by vocalist Don Maughn (who went on to have a solo hit with "Indian Reservation" as 'Don Fardon' in 67 following the inevitable band fracture) the band blasted through their high energy set with some very nice guitar breaks from Pip Whitcher, a guitarist whose style I embraced alongside my own. They played several times in Brum so I can't be the only one who remembers them. Following Fardons departure, the band moved, for some inexplicable reason to Italy where they had a couple more releases but effectively took themselves out of the UK music market which was the most important at the time? Their album is highly recommended to everyone and although you may have to fork out a considerable amount for the vynil original. It has been re-released on CD.

For lovers of actual Brumbeat (that is Beat Groups) this is a must for your collection and receives the Bulls Head Bob Seal of Approval. 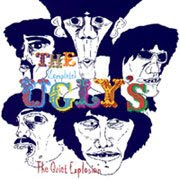 If you are a Brumbeat fan and were wise enough to purchase The Uglys CD you have done yourself a favour. Everything that this band recorded has since become a collectable item and their 2004 CD is now changing hands on Amazon.com for 75 pounds a throw. I know I should have bought two!!!

On that note of potential investment profit I shall bid you a fond farewell for this month. Don't forget to buy your Easter Eggs......

See Ya Next Time