Enough about me!! There's always an interesting story out there to be shared amongst us who remember the Brumbeat days. This month I thought I'd pass on someone else's mailbag memory of what could have been a life changing event for them. In a new thread that I shall be calling:
MY CLAIM TO FAME!!
KEN REEVES
ALMOST A MOODY BLUE!!! For those of us lucky enough to have attained teenager status and lived through the early to mid sixties as an aspiring musician, your heads will be full of memories when there were live bands playing every night in pubs, clubs, casinos etc..... constantly changing their names, with members who would be enrolled into another band before changing their minds and re-joining their previous group. I can't remember who, but one group featured on the site states that Tony Iommi was in their band (but only for one gig - somehow I dont think that constitutes full membership status?). We would all rub shoulders with each other either at the Pie Stand, one of the nightclubs or more likely, inside one of the several music shops that were spread around the City Centre. Ken Reeves from Solihull was no exception:

"As a 15 year old, a school pal, John Parish dragged me along to see a singer who sounded just like Elvis and who was playing at Solihull Civic Hall on the coming Monday. The Elvis sound-a-like in question was the late Nicky James and he was then the featured vocalist with Denny Laine and The Diplomats. 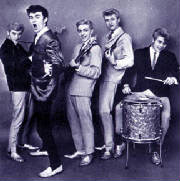 I had never seen the Diplomats before either and I was very impressed on both counts. During their performance that night Denny Laine broke a string and had no spares (not really uncommon in those days), I dashed off to another locals house and acquired him a replacement. After the gig we struck up a conversation mostly about guitars/music of course and then for next couple of years John and I would go and see the Diplomats regularly which promoted a casual freindship".

"My normal Saturday daytime activity (like many aspiring musicians)was to go into the city centre and do the round of music shops, Jones and Crossland, Yardleys, Kay Westworths, Ringway Music etc... trying out different guitars and generally chatting and playing with other musicians who regularly came in, including Denny and the gang often they would give me a lift back home to Solihull in their Transit on occasion. During this time I had played with a number of groups including a line up of The Victors with Dez Anthony who had been formed essentially as a backing band for Nicky. As was the norm we did the normal round of pubs/clubs including some gigs backing Tanya Day - she was really something! I think at one time, she was dressed in a towel or something very similar? Hot stuff for a young muso.

One day whilst walking down the street at the back of New Street Station a Ford Cortina, driven by Denny with Mike Pinder in the passenger seat pulled up, Denny called me over and said "We're looking for a bass player, do you fancy joining up with us? I was stunned that he should ask me but was then put firmly on my back foot when he said that they were thinking of playing Gospel and Soul influenced music. No decision was made and he called me at home a few nights later, here he set out their plans to go down to London. A combination of things including a tour that had gone pear shaped soured my enthusiasm. The genre of music sounded a bit wierd particularly as The Beatles and The Stones were the acts that were directing the musical trends and it sounded like a really bad proposition to me. I'm not sure whether I directly said No or that I'd think about it but the upshot was that I didn't acccept the offer.

Six months later - The Moody Blues were No 1 in the charts with 'Go Now' and I was still playing the pubs in the City. If that didn't make me feel bad enough, some time after I went to spend a holiday with a pal in the USA and in one of the major stores came face to face with a whole wall decked out with the Moodies declaring them as the new British sensation. They had made it in America. 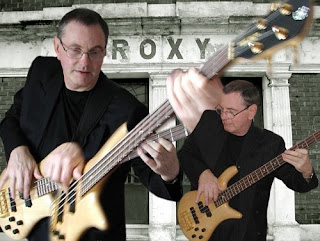 "I guess it is just one of those consequences of being in the right place at the right time and having the choice of whether to go in one direction or another. Sometimes you choose the wrong route or did I? I met up again with Denny about 8 years ago, when he was gigging at The Red Lion, Kings Heath and some months after when he played The Green Room, London. My girlfreind and went to see him with his new group, although he was good he had lost that 'sparkle' though. We kept in touch for a short while again and then I think he disappeared to the States"

GIZ A JOB........These days Ken still keeps his Bass hand 'in' and is interested in playing folk rock so, if you are in the market for a bass player just give me a nod and I'll pass on your e mail address to him...... By the look of Ken's photo he appears to have grown two extra arms ........ he must be up and down that neck like a greasy weasel. Are you reading this Denny?????

Thanks Ken........I'm sure there are many more stories out there waiting to be told. Bob.

LEVI STUBBS - THE FOUR TOPS
I once played on the same bill as The Four Tops when they had "Reach Out I'll be There" at No 1 in the British charts and although I was always never that keen about soul music I couldn't help but be mightily impressed at their slick performance, brilliant harmonies and their dance moves on stage.

The towering vocal strength of lead singer Levi Stubbs was quite stunning. He filled the stage with his presence and they brought the house down, deservedly. It is sad therefore to report his recent death at the age of 72. He had been suffering from illness for some time. (Levi Stubbs far left)


BOBBY ASH. The Ex Brumbeats vocalist who currently resides in California has just had his new self-penned recording "Hula in the Sky" broadcast across the Hawaian Islands this weekend.

Bobby sent me a copy and I can tell you now that it is a very warm recording and his voice is as good as it ever was. We here at Brumbeat hope it goes well for you mate.

Until next time, Take Care