Autumn is upon us Brummies no matter where we live and ain't it glorious?
It's my favourite time of the year when I can sit back in my rather nice outdoor chair and watch the blackbirds hopping across the lawn, searching under bushes for tasty little morsels to take back to the little ones in the nest.

Sometimes when I was a small kid and my sisters used to shout at me to stop playing the same thing over and over again on my, and this has to be said, shitty little guitar.   I would go out of the french windows into the garden if it wasn't too cold and annoy the neighbours instead!  I could hear them slamming their windows in time to the music, I would consider it as a token of support to console myself from the harsh reality that I was an outcast from suburbian life.
However listening to various instrumentals spurred me onto greater challenges and here's some that I liked/loved.
THE RAMRODS
GHOST RIDERS IN THE SKY
I remember distinctly that it was on one of those misty days that I got inspired to learn "Ghost Riders in the Sky" a song which had been around for a long time and had been a recent hit by The Ramrods in 1961.

TThere were probably a million other spotty toads who were all sat out in their gardens too?   I never had The Ramrods records so I would hear it played on the chart show on Sunday afternoon and then annoy everyone in hearing distance with my continued practising until I had it right, then would play it another twenty times to iron out the curves and then a hundred times just to enjoy it.

I played it again, out of the blue, the other day whilst doing my daily finger exercises and really enjoyed reliving that moment for a short while which brought me to this blog subject.    This is no definitive statement, merely some of the instrumentals that I enjoyed learning as a kid but have merit.

Naturally we British had The Shadows, the cream of instrumental groups and were spoiled by the amount of Shadows music to learn.  I for one, learned every track.  Little did we know what great training this would be for the future.  I am discounting The Shadows from this though because I consider all their work equally as good.  If pressed though I think I would choose The Savage, Perfidia and naturally Apache to be in the list oh! and NIVRAM and.....oops thats enough! 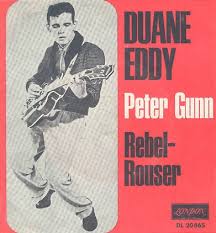 Ghost Riders sounded an awful lot like the Duane Eddy twangy guitar with tremelo.   I never liked Duane Eddy but someone rightly said about his playing of Peter Gunn was that you could go out buy a guitar and if, by the end of an hour or so you can't play the incredibly easy riff then you had no future and it was a great rock n roll riff. On the other hand it could have spurred you on to learn something more.

It was played by loads of groups at dance halls and especially if they had a sax player.

It had an amazing vibe when you played it, kind of insistent.  I'm going to include this as one of the greats for that reason and also because I saw Duane Eddy and his band at The Cedar Club in the 60's and whilst I was unimpressed with his guitar playing, his sax player was phenomenal 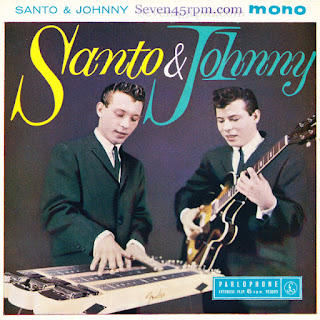 This is a 'no brainer' to put it in the American parlance.   The sound of this
record being played through a juke box was just so good to hear and So American as we sipped our froffy coffee in huge cups with tindy handles.
It was a bit of a step up in playing style, trying to emulate the sound of a double pedal steel guitar on a Hofner Colorama or something similar but I heard some killer versions of this from various groups.

The Shadows did an extremely similar instrumental calling it Midnight.

Once again on an Autumn evening, I can picture myself walking towards Moseley village with this tune in my head where a bass player lived who had the record.  We were going to learn it together and I was very excited at the prospect, it had that tremelo rich, high speed picking run-down on the damped E string as an opener to quite a haunting melody I was very impressed by this and as this band was riding on the wave of Surfing songs, I mentally visualised the group as being 'cool dudes' but the American bands always had a look of being 'quite old' in those days which was a tad disappointing but this instrumental is not only a great track but is very well recorded and still holds its own I think.
WIPE OUT - THE SURFARIS 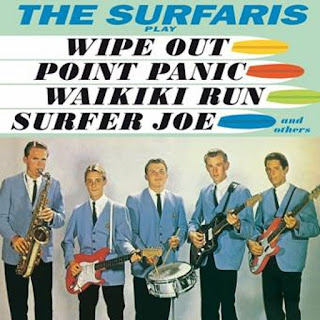 You hadn't 'made it' if you hadn't been on 'Ready Steady Go', live bands in the BBC studios giving it some hammer at 6 oclock on Friday night was the most iconic music TV show of the 60's with the best bands of the moment and some incredible live performances.  There were some lip synched clips as well.

"The Weekend Starts Here" was the shows opening line and it wasn't wrong.
The music chosen to open the show was another surf inspired instrumental called Wipe Out by The Surfaris, an incredibly simple repetitive melody line and a catchy drum roll 'riff'.  Incredibly popular. 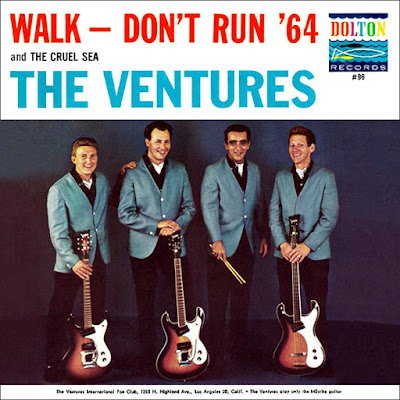 Yet another surf inspired instrumental hit by The Ventures were considered by some, to be better than The Shadows...none of those were in my group of friends thank you very much.   However this is a truly great instrumental with its run down during the first few bars setting the tone.  It was first recorded by Chet Atkins.

TELSTAR
THE TORNADOES
Biggest selling instrumental hit ever, this Joe Meek inspiration was played on a clavioline with his resident group of session group who melded into The Tornadoes and had a massive success for many a years in cabaret and playing at the various seaside resorts. 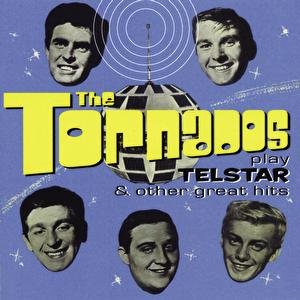 The phase of instrumentals had their day, probably with the advent of The Beatles but we all learned a lot about phrasing and developing skill sets in the art of getting sounds from your guitar without the aid of pedals.  It was more simplistic than the music of today for sure but was an enjoyable part of being in a group then and the above songs added to the rich mix of the face of changing music but have become classics.   Long may they survive.

JIMMY POWELL RIP
Sad news that Jimmy Powell has passed away.  He was a dynamic and forceful personality on the scene in Birmingham and always put on a staggeringly good show.  I recommend a quick visit to the main Brumbeat.Net site by clicking the link below for more information and access to an interview carried out by John
Woodhouse with this old Brumbeat hero.
JIMMY POWELL

So anyway you cool cats, although it's been a bit short and sweet this month I hope this has given you a little bit of yearning to get your guitar out and relive your early learning days by getting back to some of those beautiful instrumental melodies.  Give em' a go, I bet you'll enjoy it.

Hug your other half at least once a day.