Hello Brummies, Friends, Brummies Abroad, Muso's, Afficionados
BACK HOME AGAIN
Well here I am back at the old house, tucked up in bed after my summer long hospital stay. I'm still convalescing, so once again I'm afraid that this will be quite a short blog. I thought that I could lie in bed and shout down the stairs to Lucy "I'd love a cup of tea" or other reasonable requests, given my delicate state, but she seems to have developed a bad case of deafness and a sharp increase in the usage of the word Bollocks!! A quick word of thanks to all those lovely NHS people who nursed me through my month long ordeal and also my thanks go out to some of you kind folk who sent me e mails wishing me a speedy recovery. Alex, my special on-line metaphysical physiotherapist, assigned to improving my positive mental attitiude, has sent me a leaflet outlining a few simple Yoga exercises to make me supple again so, being a sharing type of person I thought I would pass them onto you in case you wanted to try them out for yourselves:

I'm sure we've all been well practised in some of those positions in the past!!

Farewell to DJ Simon Dee who recently passed on. OK, so he wasn't a Brummie or had no connection with Brumbeat but he was a certainly a great influence on the British pop scene through his Radio Caroline days, when all we had was Radio Luxembourg which famously faded in and out on the airwaves. He rose to meteoric stardom hosting his own Saturday Night TV show 'Dee Time' which attracted an audience of 22 million!! An 'E type' driving DJ surrounded by hordes of young women and living the high life of London during the sixties. He was unfortunately a victim of his own popularity and over- inflated ego so the British, as usual, turned on him and his career plummeted alarmingly overnight and within months he was bankrupt, drawing dole money of 6 pounds a week. He also did some jail time for assaulting a bailiff. Some say that he was the model for Austin Powers

ITS A REUNION OF TWO HALFS 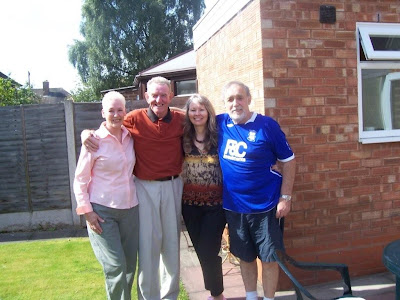 It's great when you can reunite some BRUMBEAT muso mates. Norm Crandles, formerley Lee Stevens (and The Satellites), pictured on the left, flew across the pond from Canada for a reunion with old buddie Johnny Neal, co-incidentally, their respective wives are both called Maggie! No doubt there were some 'War stories' flying about, broken down vans, crap agents, "I was always much better than people said" etc etc... Johnny is an avid Birmingham City supporter and Norm a Villa fanatic so Johnny must have been gutted when the Mighty Villa trounced the Blues the day this picture was taken, Norm's smile says it all really!! I hear that another get together is planned for the future. Good on you guys, its nice to know that the ties that bind us are still strong.
Bob
copyright BullsHeadBob, Contact Bobsbullocks@GMail.com
Posted by Bulls Head Bob at 07:00