There are times when you think to yourself that there is little to say, in my case that is most of the time but - as usual, someone or something comes along to make you change your mind and gives you cause to comment. Now this is not associated with Brumbeat but I have just read that Mancunian Mick Hucknall has decided to end his band - Simply Red. Thats worth a cheer on it's own. Now correct me if I'm wrong but did'nt the yuppie crowd pleasing red head, sack all of the band members anyway, leaving just his own white suited ego? Well he's gone and sacked himself now as well - it would be too much to wish that he would disband himself, you know sort of - a leg here, a hand there, kind of distributed around the UK. Just a thought........!!

Just why is it that Bass Players are the ones who know how to solder jack plugs and things ??

If there are thirty musicians in a room why is it always the drummer that starts an argument?

You know, I've just realised that throughout this year I have hardly mentioned The Moody Blues (post Denny Laine) at all. "Flippin' heck what a bloomin' mistake, I better set that record straight right now".

I promise that I will try harder to write something invigorating about the band next time. I was on the same bill as them, once upon a lifetime ago, at a massive outdoor fireworks event at Sutton Coldfield on the outskirts of Brum and can't remember a single thing about their set except to say that they made excitement a thing of the past.

Now throughout my time as a member of "various" groups I have been a passenger in a range of some crap relics of vans but I dont think that anyone can claim to better the fabulous automobile used by The Incas. Unless you know better? 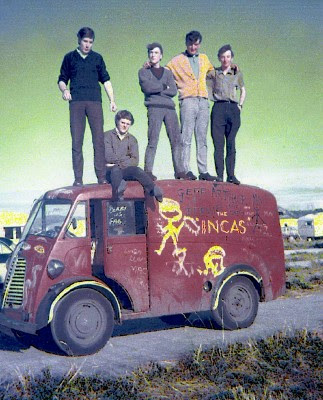 Sort of makes you green with envy, doesn't it? I can just imagine how professional you might feel as you "Go on Tour" in something that looks like it was left on the beach at Dunkirk. To save on money they cleverly employed the artiest member of the band to do a "smooth paint job" on it depicting a yellow man throwing a lasso over a hedgehog on a log. "It's bound to attract attention". I wonder just how they fitted in their kit as well? Tried to contact your website Arthur but it wouldn't let me in.

Send us YOUR Crap Van photo now. This could be your moment of fame.

Have a good Bonfire Night and be Safe!!

Comments or Contributions to: Bobs Bullocks@gmail.com
Posted by Bulls Head Bob at 19:20